The 1832 deed for the purchase of the Wairau valley from Ngāti Toa by Captain John William Dundas Blenkinsop.

At the heart of the tragic 1843 Wairau Incident, mentioned in part one of this blog, is the Blenkinsop Indenture, the original deed of sale for the Wairau valley that was signed between Captain John Blenkinsop, Master Mariner of Sydney, and chiefs of Cabetea (Kapiti Island), on the 26 October 1832.

The agreed terms between Te Rauparaha and Blenkinsop allowed him to draw sufficient water and timber from the Wairau as he required, for the simple one-off payment of an 18-pound cannonade. However, the written deed outlined comprehensive terms for the conveyance of the entire Wairau valley. Te Rauparaha only became aware of this after showing the indenture to a visiting ship’s captain who, through an interpreter, told him it was for the whole of the Wairau. Enraged, Te Rauparaha immediately tore up the document and discarded it.

The boundaries of the deed, which essentially include the entirety of the Wairau valley, are described as [abridged]:

“All the ways paths passages waters watercourses trees woods underwoods fences commons common of pasture hedges ditches flax hemp And all and every other the Appurtenanced in anywise appertaining to or belonging thereto To have and to hold the Same unto the Said John Blenkinsop his heirs and assigns.”

My Kingdom for a canon 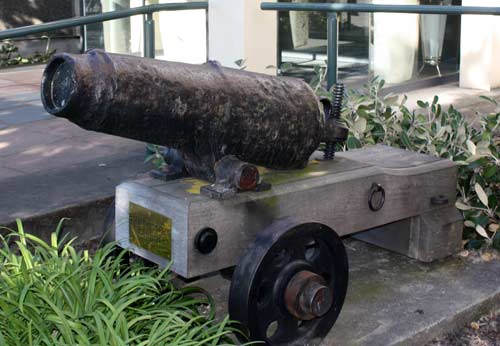 A popular story that abounds about the cannonade is that it was originally given by local whaler Jacky Guard to Te Rauparaha’s brother Nohorua for the right to establish a whaling station at Kākāpō Bay in Port Underwood, which neighbours Cloudy Bay. The cannonade was fired with a tremendous report that caused the ground to shudder earning it the name Pūhuriwhenua, meaning ‘to cause the ground to tremble.’ Blenkinsop allegedly took the cannonade and used it as payment for the Wairau transaction.

There are other versions of the story, all disagreeing with each other in various respects. Today Pūhuriwhenua stands outside the Marlborough District Council offices.

What’s in a name anyway …

The Blenkinsop Indenture has long been associated with Te Rauparaha, but few people would know that the names of six Māori chiefs appear on the document; or that the celebrated warrior chief Te Rangihaeata, who would later be demonized for his role in the Wairau incident, also appears on it. Fewer still would be aware that Te Āti Awa chiefs are also named on the deed!

But I was especially surprised to discover while reading the original deed that it now appears Te Rauparaha wasn’t actually present at the conclusion of the transaction. Rather, it was witnessed by his proxy. I’ll return to this point in a minute.

The six names that do appear on the indenture are rendered as corruptions of their proper form; Rhobullahah, Rangiheiettee, Tiwhiti, Apoo, Awhee and Atipie. The first two names are readily recognisable as Te Rauparaha and Te Rangihaeata, while the third name is clearly Te Whiti. This too was unexpected as the Blenkinsop indenture has always been positioned as a Ngāti Toa transaction. Te Whiti, better known as Wiremu Kingi Te Rangitāke, was the Te Āti Awa chief who opposed the sale of the Waitara block in Taranaki to the government, a precursor to the Taranaki Wars of the 1860s.

The fourth name, Apoo, may be a distortion of E Pō, a contraction of Pōmare Ngātata, later baptised as Wiremu Piti [William Pitt] Pōmare. This is supported by the knowledge that Blenkinsop (Piringatapu) was ‘married’ to Pōmare’s sister Te Hekenga. While Pōmare himself was married to Te Rauparaha’s niece Tāwhiti, daughter of his elder sister Te Kiripaeahi.

The last two names on the deed remain unidentified for the moment. Although it’s well documented that Te Hiko-o-re-rangi, Ngāti Toa’s hereditary leader at the time, latter formed part of the original Ngāti Toa claimant group that protested against encroachment onto Wairau leading up to the 1843 conflict. And while it’s highly speculative it’s possible that Te Hiko occurs here as Atipie, a corruption of Te Pēhi – his fathers name. This might be explained if Te Hiko adopted his father’s name, not an uncommon practice, following his recent death only a few brief years earlier at Kaiapoi in the South Island.

The addition of at least one, and possibly two, Te Āti Awa chiefs to the indenture adds a previously unknown but intriguing dimension to this document. It probably underscores the complex familial relationships and overlapping rights they increasingly enjoyed, relationships that were reinforced through common descent, inter-marriage, and shared experiences, as Ngāti Toa allocated lands for the settlement of tribes who assisted them to conquer and control the area from the Manawatū in the North Island to the upper region of the South Island.

Another unexpected twist in the story was to discover that the part of the deed that refers to Te Rauparaha as a signatory associated with the hand drawn moko, actually reads:

Signed, sealed and delivered [for] Te Rauparaha, by his attorney and brother Te Mahuranghi [sic].

The qualification, ‘by his attorney’, alters the context of this deed in two important ways. Firstly, it suggests that Te Rauparaha wasn’t present to witness it himself, even if it was concluded under his authority. And secondly, it almost certainly changes the context for the moko, which has long been attributed to Te Rauparaha. Te Mahurenga is less likely to have possessed the more specialised artistic knowledge of the tohunga-tā-moko (tattoo expert) or tohunga whakairo (master carver). In fact, it now seems more probable that the moko was drawn by Te Rangihaeata, whose name appears below that of Te Rauparaha and the moko. This is further supported by the fact that Te Rangihaeata was an accomplished master carver, an esoteric art form more generally reserved for the tribes aristocratic families, to which he belonged.

The fact that Te Mahurenga stood proxy for his more famous younger brother on this occasion occurs as a perverse irony as it was his own son Te Whāiti who, quite coincidentally, was a primary source of information for the Wakefield’s in England. Te Whāiti lived with Edward Gibbon Wakefield between 1837-1839 while he devised his plans for the New Zealand Land Company, eventually returning to New Zealand aboard the Tory in 1839 as Wakefield’s interpreter.

Te Whāiti died a few years later shortly before the events at Wairau. But the irony continues as his wife Te Rongopāmamao (Te Rongo) was accidentally killed by an errant bullet on that fateful day on 17 June 1843. In fact, it was Te Whāiti’s recent death that caused his first-cousin Te Rangihaeata to take Te Rongo into his household as his ‘wife’. A familial obligation in Māori society.

Indeed, it seems increasingly likely that it was this almost fantastical convergence of events, together with the burden of familial responsibility, that so incensed and aroused the mercurial temperament of Te Rangihaeata. A tragic case of fact far stranger than any fiction.

If you visit He iti whetū today and look at the photographic portraits that make-up the Whanau Wall you will notice centre cluster a photograph of a kindly looking elderly women seated outside the tribal house Toa Rangatira, Erenora Tūngia. Erenora is Te Rongo’s daughter and was with her mother when she was shot at the Wairau on 17 June 1843. In this photograph, taken shortly before her death, she is flanked by Wineera Te Kanae, great-grandson of Te Rauparaha, and his wife Hāna Wineera (Cootes).

The Blenkinsop Indenture Part One