‘By jove it was awful’: Writing from the soldiers’ perspective

In our latest Gallipoli blog, Te Papa’s Head Writer Frith Williams takes you behind the scenes with the writers of the exhibition.

Gallipoli: the large-scale models by Weta Workshop, the powerful stories, the interactive experiences – they’ve all attracted a lot of attention. With any luck, you won’t even notice the ‘voice’ of the exhibition. Some of the best writing invites you in like an old friend, and you barely stop to think about it. The soldiers can take much of the credit in this case.

We made the call early on to write from the soldiers’ perspective. In an exhibition about their experiences, it felt important to use their words. The compelling letters and diaries of our eight central ‘characters’ made that possible. We followed their lead.

But their words couldn’t cover all that needed to be said, so we had to fill in the gaps from the perspective of an imagined soldier. There was some debate in the team about this approach.

How could one voice speak for all those on Gallipoli?
How could we do justice to everything they went through, sitting in our cosy offices 100 years later?
How could we be sure that we had the voice right?

We also knew that the exhibition had to speak to a broad audience, including young people – the generation that will continue to debate the past and choose how to approach future conflicts. The text (like the design) needed to make them stop and reflect.

It couldn’t be a stuffy old history lesson like the sort some of us slept through at school. It also needed to steer clear of glorifying the war – we all worked extremely hard to avoid that. Ultimately, you’ll tell us whether we got the balance right.

Our narrator emerged much like a ‘ninth character’ as we scribbled, scrawled, and often restarted from scratch. We nicknamed our soldier ‘the grunt’ – a lad on the front line, rather than one of the top brass. A smart man, a thoughtful man, but also ‘one of the boys’. We wanted this soldier to talk to you as if you were in the trenches with him. If he hadn’t gone to war, you’d be having a beer with him on the front lawn.

Real quotes often inspired our grunt’s words. William Malone’s comments about himself, for instance, became our soldier talking about Malone. 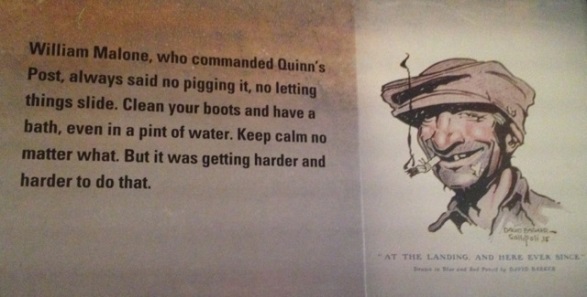 Can you say ‘bloody bastard’ in an exhibition?

Our answer to this? Aye – because the Anzacs did. If we’d shied away from the ‘unwholesome’ or disturbing stuff, this wouldn’t have been their story.

I recall one particular conversation with Exhibition Historical Director Chris Pugsley: Were we getting too slang with our soldier? I’d been struck by how posh some of the men sounded in their letters. Was our grunt too ‘grunty’? 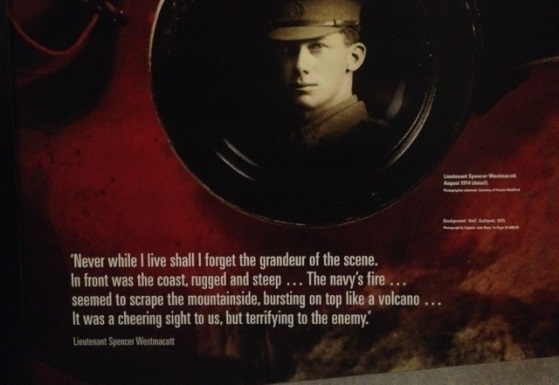 New Zealand soldiers were a reasonably educated bunch, thanks to free education. And the men who wrote a lot – or those whose words have been preserved – tended to express themselves eloquently. But others were more coarse, and some voices never made it to the page.

Self-editing was also a factor. We all alter what we say depending on who our audience is – family, friends, officials – and the soldiers did too. And the way we speak differs from the way we write. Censors also wielded their big black pens (they were there to maintain morale on the home front and protect state secrets), so the letters were never an obstructed window onto the world.

In short, we stuck with the grunt – or he stuck with us. But there is some variation in voice. It was important that the perspectives of Māori and women be there. A soldier of the Maori Contingent takes over the narration in ‘Stalemate’. And in the final section, ‘Saying goodbye’, a nurse tells the story.

For me, the final section contains some of the most poignant content. I’m sure many of us on the team quietly wiped away tears as some point during our work on the project. 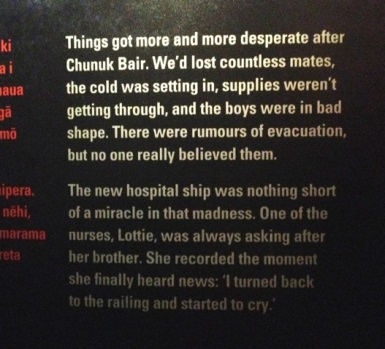 Making an exhibition about war is a complex and sometimes uncomfortable process. Whatever our views on conflict, the fact that the show has got people talking, reflecting, questioning, debating, and challenging is great to see. By presenting the soldiers’ experiences, we hope to let you come to your own conclusions, whatever they may be.

The first time I walked into the space after the opening, I was struck by the silence. The place was crammed, but everyone was walking slowly, whispering to one another, reading carefully – more than I’ve ever experienced in an exhibition. Some shook their heads in disbelief. Two girls, maybe 11 or 12, were reading the ‘Stalemate’ introduction to each other. ‘What does crook guts mean, one of them asked?’ and they worked it out together.

A small wide-eyed boy at the poppy table asked out loud: ‘How do you spell peace?’ That’s the message he wanted to leave for us all.

The writers behind Gallipoli