Today marks the 100th anniversary of the occupation of Samoa by New Zealand troops. It was the first military action of New Zealanders in the first world war.

This postcard titled ’German War Flag captured at Samoa by New Zealand Expeditionary Force’ is one of a small group of items at Te Papa that reference the New Zealanders landing and occupation. According to newspapers reports at the time the flag was captured by members of the Fiji defence force who joined New Zealand troops at Apia Samoa on August 29. The Evening Post reported that the flag was captured by Private Herbert Lloyd Bailey (Bayley) who was a member of the Legion of Frontiersmen in Fiji. He enlisted in the Samoa Advance force when they passed through Fiji en-route to Samoa. When the troops landed, Bailey spotted the German flag and rushed forward and lowered it. New Zealand troopers who witnessed the event remarked that there was quite a dramatic scene as the flag was hauled down, with German Government officials standing in the vicinity. As ‘they saw it lowered they one and all reverently saluted’.

Bailey was given permission to keep the flag by military authorities. However, later on, he and other members of the Fiji contingent decided to present the flag to the New Zealand Government. In front of the headquarters at camp, the flag was handed over to the commanding officer of the troops from the Auckland district of New Zealand. The Fiji contingent expressed a hope “that the Government would see fit to retain the flag in Auckland.” The newspaper records tell us that in the decades after the war, several flags captured in Samoa made their way into the collections of the Auckland War Memorial Museum. One of them is currently on display. 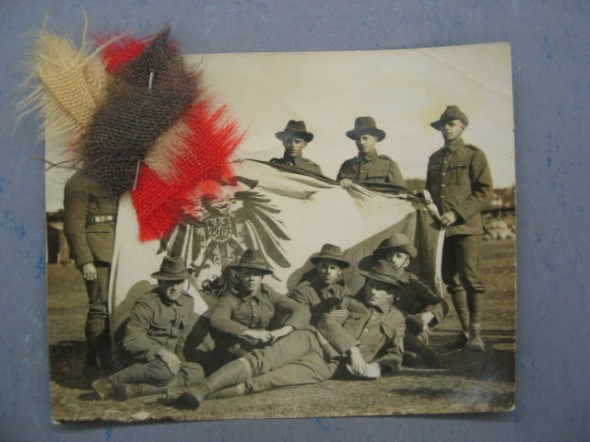 Bailey’s flag first came to my attention several years ago, when a member of the public showed me another example of the postcard with some pieces of the flag pinned to it. I was unable to commit time to researching its origins, but I knew there was a German flag in the Pacific Cultures collection. For a long time it was rumoured to be the “First German flag captured in Samoa”. However, research by Te Papa history curator Michael Fitzgerald uncovered 8 other German flags from the same period, some of which have Samoa connections. If we add these to the several flags in the Auckland museum, it almost looks as though someone found a box of flags in a supply room in Apia and handed them out to troops as souvenirs!

But of course each flag has a story. This flag in Pacific Cultures Collection was owned by R. M. Watson, a Wellington barrister who enlisted and went to Samoa in 1914, where he later served as an Acting Judge in the New Zealand Administration. He is known for writing “A History of Samoa” that was published in 1918. Later, the flag was given to Mr T.L. Seddon, a Mayor of Feilding. In 1962 it was gifted to the museum by Mr Norman Seddon.

The flag has been identified as the National Service Flag in the Competence of the Foreign Office (Reichsdienstflagge im Bereiche des Auswärtigen Amtes). In the white central disk an Imperial Eagle is depicted with the Imperial Crown. This flag was adopted in 1892 and 1893 and functioned like the civil ensign in German protected areas (1). The example at Te Papa is huge, almost 4m by 2.5m in size and we show it to visitors as a reminder that the history of New Zealand , Samoa and Germany has and continues to be closely intertwined. You only have to look at All Blacks teams of recent decades and read names such as Schuster, Kronfeld and Schwalger to see how a German-Samoa connection plays out in New Zealand’s cultural and sporting life.

Liava’a, C. (2009) Qaravi Na’i Tavi They Did their Duty: Soldiers from Fiji in the Great war. Auckland, Polygraphia Ltd.