Here is the fifth instalment in our series of blogs all about prions!  This is in preparation for our upcoming Science Live event on Oct 22nd at 1:50 pm NZ time when you can accompany us into the lab via live streaming  (a permanent link to the YouTube video can be found below).  For more details please see: http://www.tepapa.govt.nz/WhatsOn/allevents/Pages/ScienceLiveWhalebirds.aspx

Prions are indeed among the most abundant of New Zealand birds, but feathers notwithstanding, they are marine animals like sharks, snapper or jellyfish. It is only because of some quirk of evolution that they still have to breed on land, like seals and turtles – but unlike whales or the late ichthyosaurs. Their ecological home in the Southern Ocean is among food webs of the upper water column, where they are primarily crustacean feeders and thus the marine equivalents of (larger) insect eating birds. 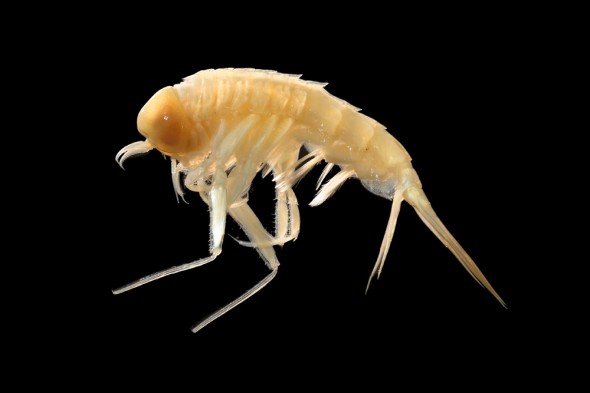 What’s on the menu?

Crustaceans come in many shapes and sizes, and not all six prion species are born equal to catch the one or the other. Fairy and Fulmar Prions, with a narrow hooked bill like many other petrels, tend to feed on “larger” prey such as euphausiids (krill), amphipods (8-10mm Themisto gaudichaudii in Fairy and Fulmar Prions from subantarctic colonies), or barnacles (Lepas australis in Fulmar Prions from the Chathams). By contrast, Broad-billed Prions feed on tiny copepods (mostly 2-4mm Calanus tonsus around the Chathams) as befits their most specialized filter-feeding bill, best described as a cross between a comb and a flatiron. Like mini baleen whales, they use an extendable throat pouch (complete with accordion like bellow) to gulp in a good serving of copepod soup, then sieve the critters through the rows of lamellae on the sides of their upper mandible. In the transition lounge are species like Thin-billed and Antarctic Prions with narrower bills but still fitted with rows of lamellae on each side.  Those bills seem to be the Swiss army knife of the prion world, as both species are able to switch from larger euphausids or amphipods to small copepods in krill poor years (tellingly, the broader billed Antarctic prion to a much greater extent than Thin-billed prion). The latter species also switches from small squid to krill and amphipods after chick hatching, whereas Broad-billed prion seem to specialize on copeods for most if not all of the year (spring to autumn at least).

Differences in bills and diet also translate into differences in feeding techniques. Narrow-billed species like Fairy Prions catch their larger prey individually, either sitting on the water (surface-seizing) or in low flight (dipping). Broad-billed Prions catch copepods mainly through “hydroplaning”, paddling frenetically into the wind, wings outstretched, and head underwater while hovering up copepods. Intermediate billed Antarctic Prion again mix both techniques, while most species are capable of plunging or diving and “wing-rowing” underwater down to a depth of seven meters or so. Prions seem to feed mostly during daytime (they certainly do so in their thousands), with the possible exception of Thin-billed Prion reported to feed mostly at dusk or at night (although seen abundantly feeding during daytime off the Falkland Is).

When feeding, prions can congregate in large flocks, especially around breeding grounds like the Poor Knights (Fairy Prions), Auckland Is and Macquarie (Antarctic prions).  In the open ocean, they usually travel on their own, although usually in densities high enough to never be far from each other, and they rapidly congregate over persistent prey concentrations. Several species can associate in the same flock, for instance mixed flocks of Broad-billed, Fairy and Fulmar Prions seen in the Tasman Sea in March.