Here is the seventh instalment in our series of blogs all about prion biology! This is in preparation for our upcoming Science Live event on Oct 22nd (today!) at 1:50 pm NZ time when you can accompany us into the lab via live streaming  (a permanent link to the YouTube video can be found below).  For more details please see: http://www.tepapa.govt.nz/WhatsOn/allevents/Pages/ScienceLiveWhalebirds.aspx 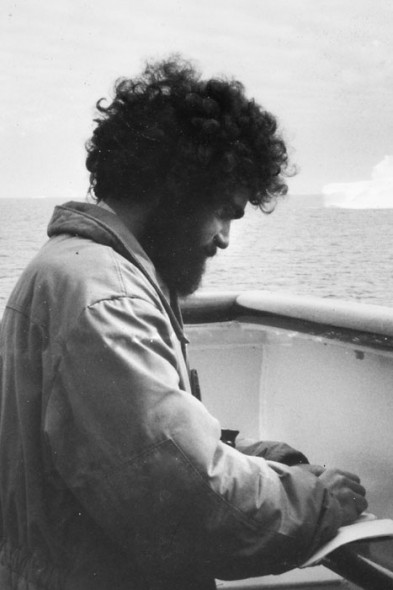 Jean Claude Stahl out at sea

Although flocks of Salvin’s Prions usually heralded the crossing of the Subtropical Front in the Indian Ocean, at other times the same front at the same locality and time of year was eerily empty of birds, both prions and other petrels. Those instances were invariably associated with a north-westerly ahead of an approaching front. Surprisingly at first, the few birds seen during such days were all heading across the wind to the south-west, and thus straight towards the “eye” of the approaching depression. Voluntarily or not, they veered from southwest to south when the north-westerly strengthened beyond 40 knots or so, seemingly “swept” towards the direction of the wind. Such a strategy would slingshot them tightly (and rapidly) round the high wind zone of a low pressure system. Escaping eastwards would be of little use, as the depression (also moving eastward) would keep breathing down their necks so to speak. Salvin’s Prions seem to fall back on their feet by flying north to northwest in a strong southwesterly in the wake of the depression, then south-east as the southwesterly eases, presumably moving eastwards with the receding depression as far as needed. Heading back into the next depression, they yoyo their way south then north again into an endless stream of low pressure systems.

While studying Broad-billed Prions on tiny Whero Island off Stewart Island, New Zealand pioneer researcher Lance Richdale had worked out by the 1950’s that sudden influxes of birds were prompted by the onset of northwesterlies, and that their just as sudden departure coincided with a change to south to south-east wind directions. Offshore, Richdale saw masses of prions heading south in strong westerlies or northwesterlies, and heading north in strong southerlies or south-easterlies, consistent with the movements recorded in the open south Indian Ocean. Likewise, influxes of non-breeding Salvin’s Prions on Marion Island colonies were shown to be associated with strong northwesterlies ahead of cold fronts.

While obviously working well in the open ocean, where there are no obstacles besides small islands for thousands of kilometres, playing chicken with depressions in such a manner can seriously blow back when facing formidable north-south barriers like New Zealand or South America. The latest massive crash of Broad-billed Prions in New Zealand would attest to that.