You may have heard of the television shows Ninja Warrior and maybe even American Ninja Warrior, but what about Ultimate Niuean warrior?  Sorry, we don’t have a Youtube clip for you, but we do have some examples of the gear and weapons worn by the old school toa (warriors) – the ultimate warriors of Niue in the 19th and early 20th century.

This is our final blogpost for Niue language week. The theme for this year’s celebration is: Leveki mo e Fakaaoga e Vagahau Niue: Treasure and Use the Niue language. Thank you for following, liking…and sharing. Koe kia!

Palahenga (feather adornment headpiece) Toa sometimes wore feather ornaments on their heads. Their bodies could be blackened as far as the waist Maka (throwing stones) When Captain Cook and his crew landed briefly on Niue in 1774, a stone thrown by a Niuean struck a crewmember on the arm: It was described ‘a large lump of coral’ but was probably a maka, made of stalactite material found in caves, and thrown without the use of a sling. These lemon- and oval-shaped stones were painstakingly polished.

Tao (spears) Captain Cook also narrowly escaped injury when a tao was thrown at him during his encounter with Niueans. In the early twentieth century, the spear point was often made of a different piece of wood from that used for the shaft, and each tao had its own name. 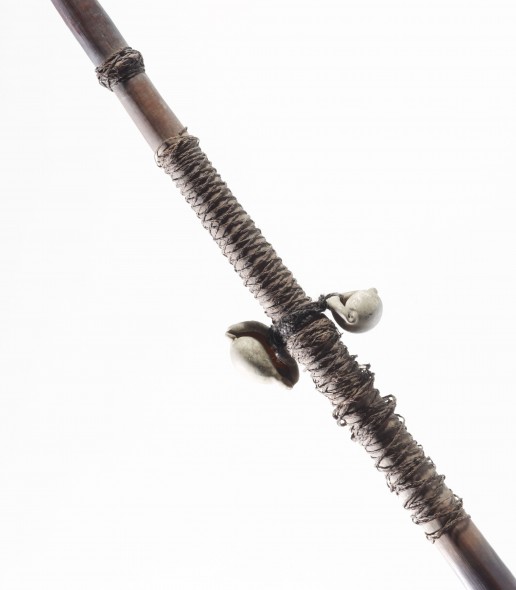 Katoua (clubs) In recent times, the katoua, a long thrusting or cleaving club, has become an iconic symbol representing identity and culture for many Niueans. Katoua are sometimes decorated with incised designs, sennit (coconut-husk fibre), feathers, egg cowrie shells, and braided human hair. Although provenance details associated with the objects are sketchy, the name ‘Lavakula’ is legible on one of them. Lavakula was a noted Tongan warrior, probably a descendant of Tongan invaders to Niue, who was alive at the beginning of the eighteenth century. This particular katoua may have been associated with his family or village. Another katoua is associated with ‘the giant chief Tareka’, who was described as being ‘seven feet’ (2.1m) tall.  Big lads…

To discover more about Niue’s cultural treasures at Te Papa download this illustrated article by Safua Akeli and Shane Pasene.