This week is the first-ever Fiji language week with the theme Noqu Vosa, Noqu iYau Talei: My Language, My Treasure. The Pacific Cultures curators will be blogging daily with Fiji related stories from the collections and exhibitions at Te Papa.

This rare flag (below) features the Union Jack with the Fijian coat of arms. It was formally approved by a royal warrant in 1908, three years before New Zealand’s flag was approved in 1911. Fiji was annexed by Great Britain in 1874, and the flag represents the colonial presence and relationship between the two countries at that time.

The coat of arms depicts two men (one holds a type of weapon called a totokia, and the other a spear) on either side of a coat of arms, above which is a camakau sailing canoe. The coat of arms features a red cross and the symbols of the main crops in Fiji, sugar cane, copra, bananas. The dove is from the coat of arms of the Fijian King Seru Epenesa Cakobau. A leopard (also known as a lion passant guardant) represents British colonists and trade  croppers and holds a cocoa pod or coconut in its paws. The banner at the bottom reads: Rerevaka Na Kalou Ka Doka Na Tui – Fear God, Honour the King. 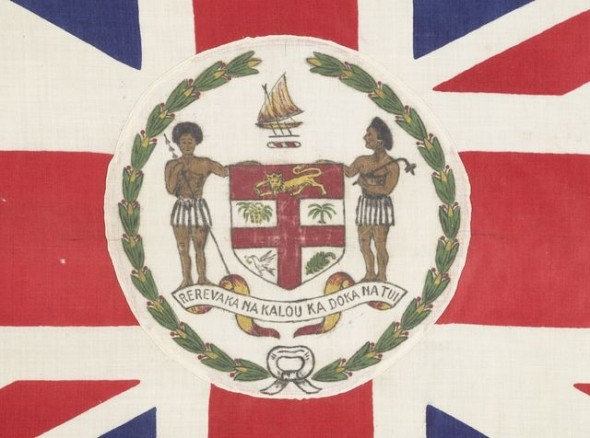