A cross between volleyball and murderball – Te Ano: national game of Tuvalu

This week is Tuvalu language week and the theme is “Tuvalu tau gana ko tou lagaifakalaga Tuvalu, your language keeps your culture and identity afloat”. Over the next few days curators from the Pacific Cultures team will be highlighting key Tuvalu artefacts and stories from Te Papa’s collections. Todays blogpost is from Rachel Yates (Pacific Cultures Curator), who writes about  Te Ano, which literally translates as “the ball”.

Te Ano is the national game of Tuvalu.  It has been described by outsiders as a cross between volleyball and murderball, Tuvaluans of all ages and gender can play. 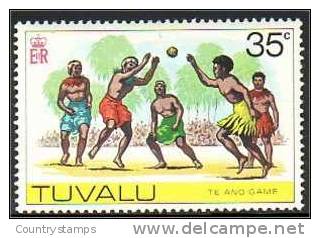 The game consists of two teams who stand facing each other on a malae (meeting ground or playing field); a designated area has been marked out for the game to be played in.  The bulk of the team is called the vaka; they stand in rows behind two central players on their team, the alovaka (captain) and the tino pukepuke (catcher).  Simultaneously, usually on the call of an elder spectator, both tino pukepuke of each team throw an ano to their alovaka who in turn bats it towards the other team.  The receiving vaka have to keep the ano off the ground and try to bat the ano back to the tino pukepuke who can then reset and throw the ball to the alovaka to repeat the move until a team drops the ano.  Teams score points when the opposing team cannot keep the ano off the ground.  As there are two ano moving about at any one time, the game is known to be fast and very exciting to watch.  The only person allowed to catch the ball is the tino pukepuke and players in the vaka try to hit the ano back to their tino pukepuke as fast as possible to set up their alovaka’s hit who tries to target weaker players in the opposite team.  The first team to ten points wins.

On the Royal Diamond Jubilee tour in 2012 the Duke and Duchess of Cambridge visited Tuvalu, the Commonwealth’s smallest nation, and while there William played a game of Te Ano with locals. 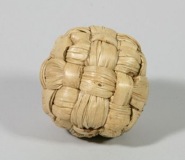 The Pacific Cultures Collection at Te Papa has collected various ano from Tuvalu, including circular shaped ano made of kie (pandanus) that would have been used in a game of Te Ano.  Ano are woven by men and women who use three strips of kie to weave a core followed by an outer layer.  They are made of various shapes, weight and sizes dependant on the players intended to use the ano, they are filled with a mixture of things including old leaves, the husk of the drinking nut, pieces of coconut shell and small stones.