In the 1800s, the most prized and finely crafted sea going vessels were ‘alia. In terms of design ‘alia the equivalent of the Fijian drua and Tongan kalia could be very large in size.

They had a large sail and two plank built hulls joined together by a deck, almost like a modern day catamaran. As well as being used for transportation, ‘alia were also used in times of war, with some ‘alia even carrying cannons[i].

One ‘alia seen in Tutuila in the year 1862 was 70 feet long five feet deep and able to transport up to one hundred men. It was also described as sailing “round a vessel in which the consular agent was a passenger, going eight knots”[ii].

So despite their great size they were very manoeuvrable.

At the end of the 1800s  the remnants of at least four Sāmoan ‘alia can be verified. There was the Fa‘ainaelo photographed at Olosega, Sau‘aitagata of Saleaula in Savai‘i, Fa‘ataugali of Safune[iii], Sanaitopata, near Leotele in Savai‘i, and one photographed with over 40 passengers on board and said to have been presented to the German Imperial Governor Solf around the turn of the century[iv].

The building of large va‘a such as the ‘alia utilised the skills of many other specialists such as sail makers, rope makers and paddle makers and was probably a great strain on the resources of a village or district.

Only strong leaders could organise such energy and resources to take on a building project of this size.

The gift of an ‘alia to Governor Solf would have been both expensive and prestigious. Sadly due to the high costs of transporting the vessel to Germany it rotted away on the beach at Sāmoa’s capital, Apia. This was probably the last of the full size ‘alia to be seen.

Here we feature two items from Te Papa collections: a photograph of an ‘alia from the 1800s and a model of a drua the Fijian equivalent of an ‘alia. 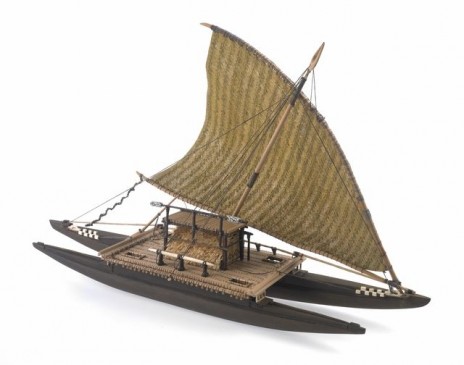 [iii] These three were sighted and examined Kramer who gives a description of the building of an ‘alia. see Kramer A. 1995 Vol 2.page 300