The eye of the colossal squid 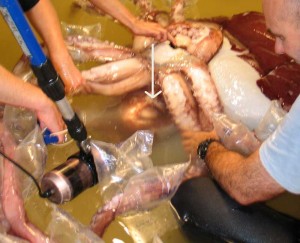 My name is Prof. Eric Warrant from the University of Lund in Sweden (blonde hair, blue glasses), and I am here together with Prof. Dan Nilsson (also from Lund) to study the gigantic eyes of the colossal squid. These are truly amazing eyes – in the collapsed state we see here, they measure 25 cm across, but in the living animal they are probably larger, up to around 30 cm in diameter (the size of a soccer ball). These are without doubt the largest eyes that have ever been studied (and probably among the largest eyes that have existed during the history of the animal kingdom), and it is tremendously exciting for Dan and I to be here in Wellington.

The eyes of cephalopods (squid and octopus) are very much like our own, “camera eyes” that contain a single lens that focuses images onto a retina lining the concave rear surface of the eye. We have removed the lens from one eye, and as in all cephalopods, it consists of two halves. In the pictures showing two “lenses” we are in fact looking at the two halves of a single lens. They are somewhat degraded, and these two halves probably represent the higher refractive index core of a larger lens – the jelly-like coating around the lens (of lower refractive index) has most likely disappeared. When this squid was alive, the lens was almost certainly spherical and possibly of a size similar to an orange (ca. 80 – 90 mm diameter).

The “optic lobe” of each eye is the part of the brain that processes the visual information coming from the eye. Even though we have not yet had the chance to look at the optic lobe in this Colossal squid, we did have access to the optic lobe of a considerably smaller Giant squid (Architeuthis dux). Its optic lobe was the size of a small sausage – larger in size than the entire visual cortex of a human (the visual cortex is our “optic lobe”). The optic lobe was also much larger than the remainder of the Giant squid’s brain, and shows just how important vision is to these huge squid. 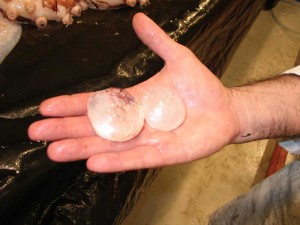 I suppose the question on everyone’s mind is why these squid have such enormous eyes? Firstly, by having huge eyes it is possible to have huge pupils, and a huge pupil (in our Colossal squid probably around 80 – 90 mm across) allows the eye to collect every last photon of light in the incredibly deep and dark waters where it lives (ca. 1000 m below the sea surface – human visual threshold would occur at a depth of around 500-600 m). Large eyes also allow the possibility of high spatial resolution (the ability to distinguish spatial detail), although it is possible that neural mechanisms in the optic lobe sum signals from groups of neighbouring photoreceptors, thus making the visual “pixels” larger, but also much brighter. Thus with enormous eyes, and a large and complex optic lobe, giant deep-sea squids, like the colossal squid we are studying here, have the potential for advanced vision in the profoundly dark depths where they live. This ability would be potentially useful for many tasks, including the detection of prey and predators, and for seeing each other. 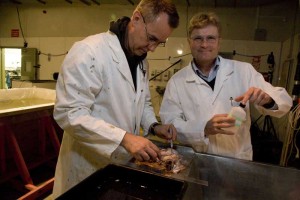