Avatar and the Pacific language connection

It seems the language of the Na’vi, the indigenous people of the planet Pandora, may be the latest addition to the family tree of Pacific languages. In recent publicity surrounding James Cameron’s blockbuster film Avatar, it was revealed that the development of the Na’vi language was influenced by Maori language. As reported by Charlie Gates of The Press “Cameron used language expert Paul Frommer, of the University of Southern California in Los Angeles, to mould the alien language, mixing Maori with languages from Europe and Africa.”

In the Pacific, there is a ‘family tree’ of languages. When groups of people left their homeland and settled in new places in the Pacific, their languages began to change. Over hundreds of years, languages became quite distinct from the original language, or ‘proto-language’, of those languages left at home.

By comparing the sounds, words, and sentence structures of modern Pacific languages, linguistics researchers can trace historical relationships between different Pacific peoples and create what you could describe as ‘family trees’.  They can even reconstruct proto-languages that no longer exist. This gives us insights into the lives of the people who spoke those languages, sometimes thousands of years ago.

The connections between Pacific Islands languages have been important for telling stories here at Te Papa. In the exhibition Tangata O le Moana: the story of Pacific people in New Zealand language is an important strand of evidence highlighting the connections between Maori and their Pacific ancestors. For example, vaka, va‘a, and wa‘a are all words for canoe in various languages of the eastern Pacific. The Maori term is waka. Similarly fale, hale, ‘are and the Maori word whare are terms for house. 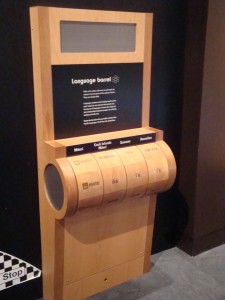 Next time you come to Te Papa visit the language barrel interactive in the Tangata O le Moana exhibition. Line up similar words in four Pacific languages, and listen to hear how they are spoken. You won’t hear Na’vi but you can decide for yourself whether Maori really is the proto-language of the native peoples of Pandora.