Plan your life by the Maramataka

Ngā mihi o te Tau Hou! Today’s New Moon marks the start of the lunar new year. So now is a good time to sync your life to the Maramataka – the Māori lunar calendar. Read on to learn about the Maramataka and what each day of the month is good for, and then download a dial to keep track of the days.

The Maramataka – which literally means ‘the moon turning’ – is the Māori lunar calendar, and is the traditional Māori way by which time was marked. Instead of following the movement of the sun throughout the year, iwi communities in history noted the movements of the moon over a typical month and year, and marked by the passage of 12 or 13 lunar months (depending on the location throughout the country) and each phase of the moon was named.

The Māori calendar begins in Pipiri (June/July) with the reappearance of the Matariki star cluster signalling the New Year. Some days (nights) of the Maramataka were better to do certain activities than other days. For example, planting and harvesting food supplies was conducted almost always through consulting the Maramataka. Similarly, fishing or convening an important hui or conducting rituals, such as baptisms, the Maramataka was consulted. The Maramataka also marked significant annual events such as celebrations in the time of Matariki and other seasonal activities.

Brought to New Zealand by the first Pacific Islanders from Hawaiki, it was adapted by Māori to accommodate the southern hemisphere’s sky, seasons, and climate.  The original Maramataka was an oral tradition which was later documented by early ethnographers who recorded some of this knowledge while it was still in use, and is still in use today among various iwi. 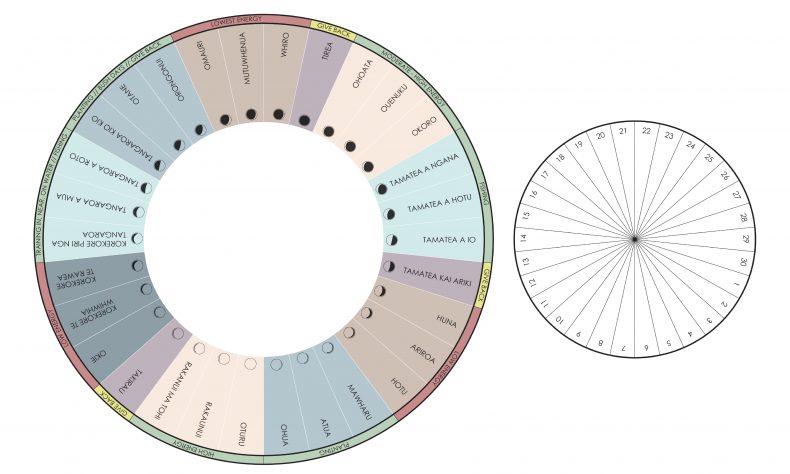 How the Maramataka dial works

Align today’s date with today’s phase of the Moon (if you live on the west coast, set your dial to the previous day). This shows you the Māori name of the phase.

The colours on the calendar dial show different energy levels. The levels are caused by the gravitational forces of the Moon, Sun, and Earth. These forces pull the Earth’s water in one direction.

The energy levels set different times for things to grow, to be active, and to regenerate. We humans are also pulled by gravitational forces, which affect our biology and emotions.

Make your own Maramataka dial and try these activities

Download, print, and cut out the Maramataka dial (1.4 MB)

Pin the small disc (with days of the month) in the centre of the big disc (with phases of the Moon).

Takirau – give back to the soil
Weed and prepare your garden for planting.

Okie, Korekore-te-whiwhia, Korekore-te-rawea – low energy, give back to Papatūānuku (the earth mother)
Help to clean up inside and outside the house.
Volunteer for a community clean-up project.

Korekore-piri-ki-ngā-Tangaroa, Tangaroa-a-mua, Tangaroa-a-roto – fishing and planting
Learn how to make fishing rigs.
The fish are biting, so go fishing!

Tangaroa-kiokio, Ōtāne, Ōrongonui – give back to the forest
Go on a whānau bush walk and learn about native trees.

Omauri, Mutuwhenua, Whiro, Tirea – lowest energy, give back to the soil
Help to clean up your local bush.
Prepare seedlings for next planting season.

Ohoata, Ouenuku, Okoro – moderate energy, give back to the heavens
Meditate with your whānau.
Have a night without electric light, TV, phones, and computers.

Tamatea-kai-ariki, Huna, Ariroa, Hotu – give back to the water
Clean up your local beach or river.
Go walking or cycling with your whānau.

Māwharu, Atua, Ōhua – planting
Plant a fruit or native tree, or donate one to a school, a marae, or Trees That Count.

Dial reproduced courtesy of The Spinoff and author Ayla Hoeta (‘Move over astrology, it’s time to return to the Māori lunar calendar’).