Hosts are experiencing a different sort of gallery space just now, as Ngā Toi remains open while it transitions from Season 5 to Season 6.  Having a gallery remain open while major changes are made is a big juggle for our Te Papa team. They work so there is minimum disruption and the visitors can come into the gallery and still enjoy seeing some art!

Firstly, changes took place on the 1st of August when the five small galleries closed at the Eastern end of Ngā Toi while leaving NZ Photography Collected in the Western end still open.  Then on the 8th August NZ Photography Collected and Art of Remembrance were closed leaving only the Open Home gallery and Carleton Watkins photographs for visitors to view – “no problem”  “how exciting” “I’ll be back” visitors said.  Being semi-open seems to work like a “teaser” for what is coming…

Visitors were fascinated as they watched the de-installation of Art of Remembrance  and NZ Photography Collected which were done in full view.  They were interested to see the exhibition team donning gloves and carefully easing the quatrefoils and photographs off the wall.

Many comments came when the walls were being plastered and painted as well.  Visitors admired the man using a roller to paint the walls, saying  “He’s got his work cut out for him”  and “He can come to my place.” One man asked “Is he creating an art work?!”  He gracefully continued painting – a job well done!

Temporary panels and walls are up in different parts of the gallery now – it seems to bring expectations, like a present that is about to be unwrapped!  Visitors can hear  swishing sounds, banging, beeping, chatter , and ask “What are they doing?”  Some might be lucky and get a peep of what’s inside when the door opens to let someone in or out!  One visitor was thrilled when he caught a glimpse and saw Webber’s painting Poedua.  He said he would be back when the gallery opens.

Staff involved in the Season 6 installation walk or push trolleys through the gallery. This isn’t disruptive at all –  it adds to visitor experience because they ask questions.  One woman asked if she could go and have a look inside the gallery where Splendour will be when she saw a trolley come out.  When I explained she couldn’t,  we talked some more, and she gained a better understanding about the work that goes into creating new gallery spaces, and that the art doesn’t just instantly appear on the walls!

All the while, the Whare Toi has been a focal point for visitors who appreciate the opportunity to keep right on drawing pictures of all descriptions!  We have had a good number of drawings appear during the change over period.  So many are just left on the drawing tables like this cute one which I set aside: 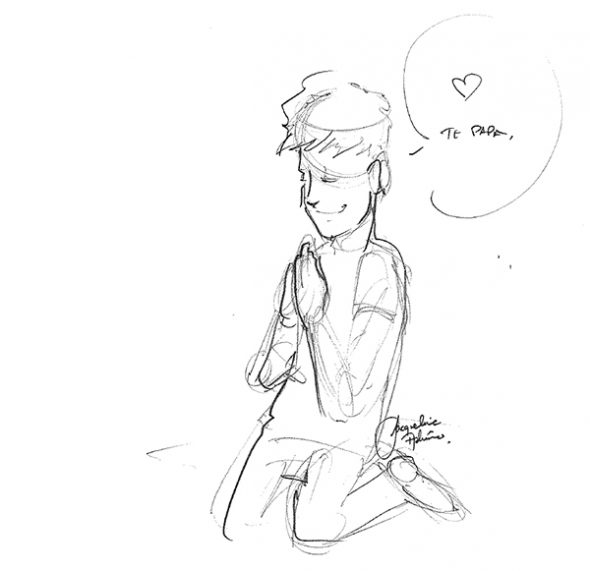 Visitors also continue writing comments on stickies which are stuck on the wall in response to questions about SELFIES  and ART topics.

We are into the fifth week of the change over. Framing the View, New Visions, Helen Hitchings and Modern Maori Art galleries have been the first to open.   Hosts have been doing a great job explaining to visitors about the changes and the new art works that are on display.  Visitors have mainly been thrilled with the galleries.  They express their loves, their dislikes, their appreciation, and ask many questions.  Here are some:

Goldie’s The Widow is getting lots of attention from visitors saying  “Oohs” and “Aahs”  “it’s like a photo”, “it’s amazing”.

Some people have asked about the Pink and White Terraces; it seems visitors are unaware they existed and some ask “Where are they?” Of course many also know about them and like them!

An 8yr old Chinese girl looked at this painting, turned to me and said “That’s inappropriate, who chose this painting?” I said that in a gallery you will see paintings of nudes sometimes.  She still wasn’t happy!

An older Fijian woman had been telling me about the Pandanus necklace displayed in the Adorned gallery.  She told me how nice those necklaces smelt.  When she was going to walk out through the Whare Toi,  I suggested she should also see Framing the View and New Visions gallery.  When we rounded the corner her eyes lit up on seeing the Palm Sunday mural by A. Lois White, saying excitedly that her Church got the children to act out this procession every year when she was a child.  “It was a big occasion” she said “they used to lay down big leaves in front of the procession instead of cloth”.  It was nice to see how happy she became!

One woman told me as she was walking out of Ngā Toi that she had been attracted to the Curtain by A.R.D. Fairburn hanging in the Helen Hitchings gallery.  After reading about Helen she  became inspired by her.  The woman knew Wellington’s history well having lived here at the time Helen had the gallery, but didn’t know anything about her.  She was going to research her.

Visitors react in different ways to the Ad Reinhardt prints in Te Ao Hou and some have said “They do nothing for me”.  Hosts have noticed that when they encourage visitors to look longer at the works visitors appreciate them much, much more. They express how pleased they are saying things like  “look, there’s blue in it!”.  The quote by Ad Reinhardt is helpful to visitors:

“The free-est and purest aesthetic statements of the twentieth century have been made in abstract painting”.  Ad Reinhardt

Then there’s Matt Pine’s marvelous Centre Line, a string and plumb-bob work situated close to Ad’s prints.  One man stopped to look at it and said  “I love this work because it is so simple, so still and it makes me feel peaceful in this frantically busy world”.

Season 6 will be a stunning gallery when it is completed in a couple of weeks!  Hosts are telling visitors to come back for the grand opening on the 16th September.