“Fewer…realised that the Maori is not intimidated by power, just as the fighters of a warrior race were not intimidated by the big guns at Orakau or Gate Pa. The indomitable desire of the human spirit for freedom and justice cannot be denied by repression. That was the undying message of Rewi Maniapoto: the struggle will go on forever.” [1]

It was with great sadness that the country was informed that Ranginui Walker, political commentator, social justice advocate, activist, scholar, and author, had passed away at his home in  Auckland, Monday 29 February 2016. A personal hero of mine, his national significance and influence on the country’s insight into Māori – Pākehā relationships, politics and the effects of colonisation, is immeasurable. What was powerful about Ranginui’s role in the political awakening of many young Māori of the late 20th and early 21st centuries, was his visibility, his consistency, and his absolute commitment to improving the place of Māori people in Aotearoa.

His masterpiece, Ka Whawhai Tonu Mātou: Struggle Without End (1990) was a much thumbed-through book while I studied at university. Like many young Māori students aware of the injustices that Māori faced, and angry with it, I had not yet formed an ability to articulate the reasons for that resentment. But Ranginui’s work was a cipher for me, fomenting the sharp language required to make my transition from young person buffeted by political and social forces, to a critically aware and politically conscious wahine Māori.

I first met Ranginui when I was a freshly minted graduate student, working at Te Wānanga o Aotearoa. Ranginui was part of a panel of experts that were assigned to oversee degree accreditation. These degree panels normally comprised of exceptionally accomplished people, such as Dr Turoa Royal, Associate Professor Manuka Henare, and Professor Ranginui Walker. It was a service he did on behalf NZQA for the other two wānanga as well (Te Wānanga o Raukawa and Te Wānanga o Awanuiārangi), demonstrating his dedication to improving Māori education. I was so star struck and shy when I met Ranginui, that I had to plead to my boss at the time to ask Ranginui if he would sign my Apirana Ngata biography, He Tipua, which he had published in 2001. That book became one of my most treasured possessions. 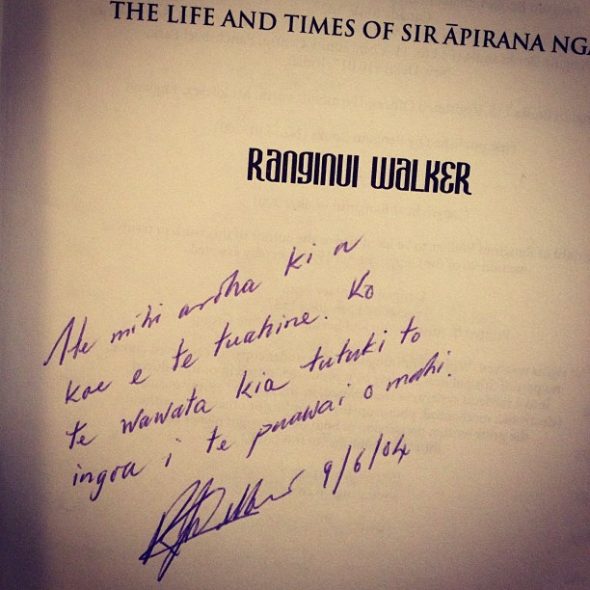 Ranginui Walker, with his dual Lebanese and Māori ancestry,  also had an intrinsic understanding of the complexity and unease for Māori who live with dual and plural identities. Added to this was his innate sense of fairness, and he was fearless in calling out imbalanced distributions of power in New Zealand society. After Don Brash’s infamous Orewa speech (January 2004) where Brash attacked what he saw as Māori privilege as part of a political campaign, Ranginui retorted in a later interview:

“I have no time for privileged people who take advantage of their privileged position to attack the weakest people in our society.”[2]

This firm leadership and conviction defined Ranginui, and his legacy is one of hope.  By honestly critiquing those elements in our nation that are exclusionary, and which privilege a few over the many, we will ultimately make our way to a more mature and inclusive nationhood. Ranginui had the unenviable position of holding up a mirror to the nation so that we were able to truly reflect on the good, the bad, (and the ugly) in what we saw.

Ranginui Walker was my respected university teacher to whom I owe a great deal. He built students’ confidence in research and gave an amazing example of how a reasoning voice and his writings could influence the country. He led New Zealanders towards a better understanding of te ao Maori through his regular writings in The Listener and several other more recent books. His patient work as a bridgehead between our two peoples was crucial in decades of debate and adjustment of relationships in our nation. A time to grieve but also to honour this great man.