Help Wanted: Who, What, When?

Photographs tend to come to museums with little or no information attached.  The ones below are planned for use in an upcoming Te Papa book on our photography collection. You can help us flesh out some detail on these old photos before it gets locked down in print.

This one has two curious features. First, the window by the doorway is set quite low compared with the others. Its height is more in keeping with a Maori meeting house. Is it possible that the origins of the house lie in a wharenui, with side wings added? The pitch of the roof seems a bit too steep though.

The bigger issue is what uniform the man is wearing. Pungarehu was an Armed Constabulary (AC) camp in Taranaki used as the base from which to invade nearby Parihaka in 1881. But by 1886, when this photograph is believed taken, a ‘one policeman’ policy had been introduced to Pungarehu to try and defuse on-going tensions between Parihaka Maori and Pakeha. Whether the man here is this sole policeman isn’t known, but he isn’t wearing a regular AC uniform. A possibility is that the photograph was taken after September 1886 when the AC was split into the NZ Police Force and the NZ Militia (the beginnings of the NZ Army). But even if the photograph was taken after September (and it is unlikely), the police uniform was much the same as the AC one, a dark blue tunic and trousers and soft cap. Then of course, there is the question of the relationship of the man and the woman, and indeed between all the people. Any ideas? You can zoom into the detail of the image by clicking on it when you are taken through to Collections Online. 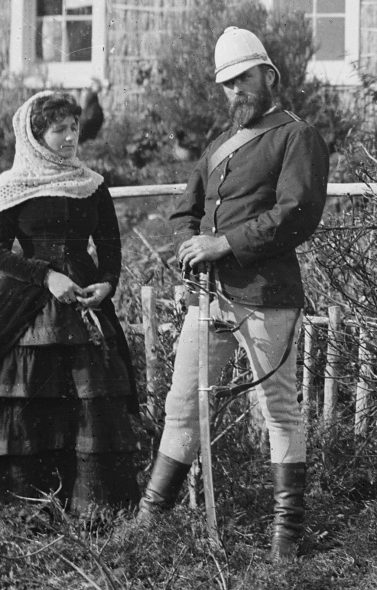 Moving forward well into the 20th century, what date should we put on this photograph? It depicts some grocery delivery trucks from the Foodstuffs co-operative, who were associated with the Four Square grocery stores. Foodstuffs had a warehouse in Martin Square in Wellington and this photograph could well have been taken there. The question is when. The truck on the left is probably a Chevrolet, the one on the far right a British make. We know the photographer began working in 1931 and went off to war in 1940, but can we narrow the date range down further? If there is a listing of truck plate years somewhere their numbers might give a clue about period: H28.289; H30.997; H31.914. The partly obscured car at right might be a dating clue as well. Here are close-ups of the most readable truck plates:

What are these people making? They are in a Wellington factory, 1920s or 1930s. There look like mops at left, but the people further over seem to be assembling electric motors. However, these are quite small, too small to drive floor polishing machines, if that is what the mop heads are designed for. Note the woman at the far bench using the magnifying device. Obviously some fine work required at some stage. How does all the fabric working connect to the metal working and assembly? 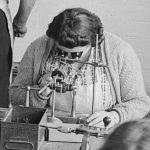 Scroll down to see the other two photographs. Same woman in same dress. But are they different occasions? She is wearing different shoes in the first two. And there are different men in the first and third, and different rugs, but a similar record player, and looks like same friend at left, though with different hats. Or has she swapped hers in the third for that of the woman in the first. There seem to be different cars in each photograph. What are they and when did they first appear? The first one is apparently a 1929 Austin, but what about the others? And what dates are the clothes? I would have thought 1920s, but if the car is 1929 then maybe we are looking at the early 1930s?

Has he strayed off the highway into the woods and chanced upon an elegantly dressed woman who happens to have a map within the voluminous pockets of her coat? Or maybe the car is so brand spanking new they are reading the instruction manual before heading out onto the road. Make up your own story, but what I really want to know is what car and what year was it first produced? An internet search suggests Ford Falcon XP around 1965, but someone will know for sure.

Any information or leads gratefully received.

− Athol McCredie, Curator of Photography
P.S. This blog is getting a lot of hits. So I’ve done further two (#2, #3) with more photos that need info (we have plenty!)