From 1956 artist and photographer Eric Lee-Johnson began photographing the night sky near his Northland home of Waimamaku. He generally used time exposures, where the shutter is held open from anywhere between seconds to hours. With longer exposures the stars show up as trails formed by the rotating motion of Earth. Aiming the camera at the pole, the point around which the Earth rotates, gives a pattern of concentric circles as the stars appear to spin around the heavens (actually, as our planet spins on its axis and the stars stay still). You can see this in the photo here. But what about the bright light with its spiral arms at left? If this is an alien flying saucer, then perhaps what Lee-Johnson has captured pre-dates the discoveries made by another New Zealand photographer in this field, Darren Glass (see my last blog). Is there an energy source (the blob to the lower left of the main orb) that actually rotates about the spacecraft? I am reminded of an electron spinning about the nucleus of an atom. Is there something analogous going on here? How would that work? 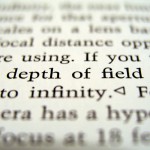 The charming optical term ‘circle of confusion’ may not unlock this photograph exactly, but it does come to mind. The expression often comes up in relation to photography, as it defines depth of field. In theory, a lens focusses only a single plane in front of it on the film. In practice, the eye still sees a zone of sharpness in front of and beyond the plane. This is known as the depth of field (or depth of focus). The circle of confusion is the largest blurred spot as you move back and forwards from the lens that is still seen by the eye as a perfect point of sharpness. (Which leads to another nifty term: the circle of least confusion.)

The stars in Lee-Johnson’s photograph above are effectively at a point of infinite distance from the camera, so there is no depth of field amongst them if this is where he focussed his lens. So no confusion there. The Norfolk pine at right is obviously closer to the camera than the stars because the trails don’t overlap its branches and also, since we are familiar with trees (unlike spaceships), because it provides a sense of scale. The lights and their spirals are also closer than the stars it seems, but how close? Lack of sharpness is no guide because we assume the lights are moving. Depth eludes us here.

Windmills of the Mind

Here’s some music to contemplate the conundrum. It was composed by Michael Legrand, with English lyrics by Alan and Marilyn Bergman, and was a 1968 hit for Noel Harrison. It was used as the theme song for The Thomas Crown Affair of the same year (starring Steve McQueen and Faye Dunaway) and later sung by Sting for the 1999 remake. The words go in part like this:

Round, like a circle in a spiral,
Like a wheel within a wheel
Never ending nor beginning
On an ever-spinning reel.

As the images unwind
Like the circles that you find
In the windmills of your mind.

This is no. 2 in my series on UFOs, aliens and outer space related to photographs held in Te Papa’s collections. Other posts:  Alien Power Source; New Zealand’s Roswell; Miniature Alien Invaders; Satellites of Love; Getting Close to the Moon; Rabbits on Mars; Aliens: Here Already?; Nostalgia for the Future.