The largest invertebrate on the planet 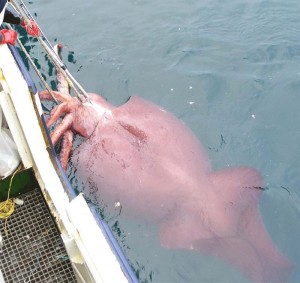 The colossal squid – first described in the early 20th century – is known from about 11 specimens, of which only three or four are intact: most are fragments of arms or branchial crowns recovered from sperm whale stomachs. Te Papa, the Museum of New Zealand, has one complete subadult specimen in its collections, and over the last few days we have been examining an incomplete specimen weighing 161 kg which was collected earlier this year. The largest known specimen, the 495 kg squid collected in the Ross Sea in February 2007 by the fishing vessel San Aspiring, is thawing in preparation for study on the 30th April.

From the measurements taken by the scientists, Dr Steve O’Shea and Dr Tsunemi Kubodera, while examining these specimens, it will be possible to determine just how big this species grows.  At 495 kg the San Aspiring specimen is the largest known invertebrate on the planet. The question is: Does this species grow even bigger, and do larger squid exist?

Preliminary measurements of the beak sizes, and the size of beaks found in the stomachs of sperm whales, suggest that colossal squid weighing upwards of three quarters of a tonne may exist! Until the large specimen is completely thawed, and can be ‘unfolded’ from its position in which it was frozen when placed into the fishing boat’s hold, we cannot be sure of its total length.

Using the known beak sizes, weights and lengths of the few specimens available, it will be possible for the scientists to determine an upper size limit for the colossal squid species.

Is the colossal squid the mythical “Kraken” of Norse legend?