If you watched late night television towards the end of the 1960s you might remember the following theatrically pronounced lines:

For [architect David Vincent] it began one lost night on a lonely country road, looking for a shortcut that he never found. It began with a closed deserted diner, and a man too long without sleep to continue his journey. It began with the landing of a craft from another galaxy. Now David Vincent knows that the Invaders are here, that they have taken human form. Somehow he must convince a disbelieving world that the nightmare has already begun. 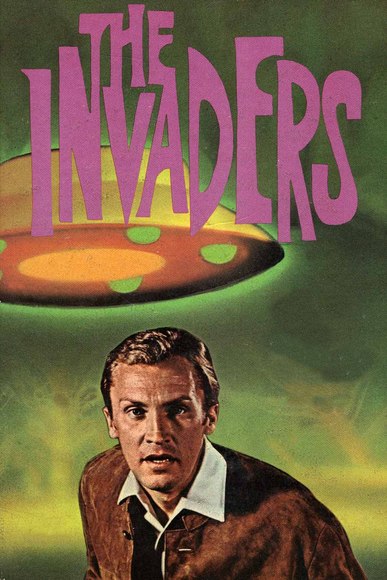 This was part of the opening narration for The Invaders, a 1967-68 American TV series intended to replace The Fugitive. Like Richard Kimble in The Fugitive, the David Vincent character is always on the move, never knowing whom to trust. It’s an essay in paranoia, also recalling Don Seigel’s classic 1956 movie The Invasion of the Body Snatchers, where the local cop, the sweet old lady across the road, or the kid next door could be an alien in disguise. Turning to the authorities is no use, because you can’t prove anything and you may be talking to an alien anyway. It’s all Cold War inspired of course, when communists were believed to have infiltrated Western democracies to secretly undermine their foundations.

If the aliens were not represented in their true form in The Invaders, their technology was occasionally glimpsed. The opening sequence shows a flying saucer landing and the aliens used a saucer-shaped ‘death disk’. This fitted neatly in the palm of the hand and caused an apparently natural death when applied to the neck of an unsuspecting victim. Both spaceship and weapon have a circle of glowing lights on their underside. So where does the saucer idea come from? Why don’t extra-terrestrial beings travel in flying saucers in today’s sci-fi movies? How did they upgrade their technology so quickly?

The design of the flying saucer in The Invaders was drawn from two well-known photographs of sightings: the often reproduced ‘Adamski scout ship’ of 1952 that, as one commentator has observed, looks like a chicken incubator, and the Rex Heflin sighting of 1965 in Santa Anna, California of an airborne disk crossing the highway in broad daylight. The Adamski saucer has three protuberances underneath that the makers of The Invaders multiplied to five and were made to glow, reflecting (or was it creating?) the pattern for many flying saucer visualisations since.

It is possible that four photographs by Darren Glass in Te Papa’s collection offer a remarkable insight into first generation alien power sources. By flying model saucers equipped with multiple camera systems Glass seems to be suggesting that rotational capture of solar energy via minute input collectors is the secret behind saucer propulsion. I don’t know if anyone else has picked this up before (and I’m not talking about solar wind ‘sailing’), but it makes sense: given the massive energy requirements needed to exit planetary gravity fields, channelling solar energy was more practicable than carrying your own power source before gravity repulsion devices were invented. This would explain why the saucer shape was once so popular for scout craft. Here are Darren’s test models:

And here are the results recorded showing the energy patterns captured on photographic paper inside the saucers:

This is no. 1 in my series on UFOs, aliens and outer space related to photographs held in Te Papa’s collections. Other posts include: Confusing Circles; New Zealand’s Roswell; Miniature Alien Invaders; Satellites of Love; Getting Close to the Moon; Rabbits on Mars; Aliens: Here Already?; Nostalgia for the Future.