One of the core roles of Te Papa is to continue to acquire taonga that enhance and add-value to its existing collections. And with more than 30,000 individual items in the Matauranga Māori collections, Te Papa’s collections are considerable. And even though a considerable number of that total is made up of ‘archaeological material’, Te Papa remain the kaitiaki (custodians) of the single largest collection of taonga Māori in the world. Included within that is the largest single collection of Māori textiles, or kākahu Māori, more than 350 individual items.

In November 2012 we became aware of a kahu ngore that was to be sold at a small provincial auction house in England. The auction catalogue details were scant but the accompanying image was arresting, a classical kahu ngore, simple and elegant. A type of cloak that was once common during the mid 19th century, still vibrant with colour and seemingly free from the worst excesses of age, wear and infestation. The opportunity to acquire a ngore of this quality, and in such good condition, was an uncommon and exciting proposition.

A characteristic part of the legacy of collecting taonga Māori by European collectors has been the collection and acquisition of ethnographic antiquities as curiosities without consideration for the cultural, social and historical context from which they’re derived. So it was unexpected to discover that the ngore was accompanied by an unsigned hand written letter briefly describing the circumstances under which it was acquired by the paymaster of the 58th Regiment sometime in the late 1840s or 1850. While it doesn’t immediately unlock its history, it at least provides clues that might allow us, with further research, to identify the occasion and location at which it was gifted, and in doing so identify the people to whom it previously belonged.

Some time late in the forties or early in 1850 after Col Wynyard of the 58 regiment had put down the rebellion of the Maori chiefs against the British Government a party of officers of that regiment and some of Bishop Selwyn’s household proposed a visit to a friendly tribe on a fine Christmas day (summer there). My brother paymaster in 58th was asked to join the party – the chief and the tribe were delighted to receive them and honoured them in their native fashion – my brother stood more than 6 feet high and the chief selected him as the most important of the party and unpegged his royal robe from his shoulders placing it round my brother who gave it to me on the regiments return to England in 1854 or 55. 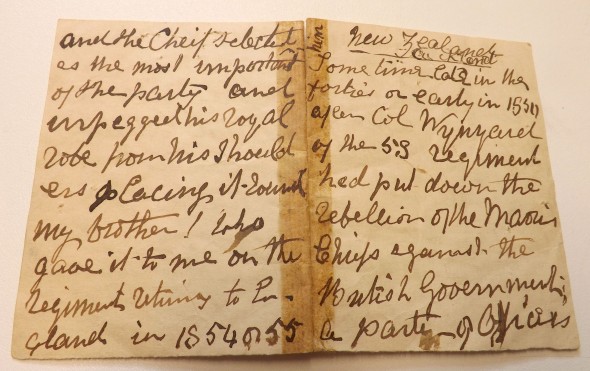 Hākari (tribal feasts) events, like the one described above, were important tribal events, and often became a matter of inter-tribal competitive hospitality. On Christmas Day 1854 in the Northland district of Karetu, in the southern Bay of Islands, Pōmare hosted Christmas dinner, in response to the previous years Christmas dinner hosted by Tama-rehe of Waiomio.

To accommodate the guests a large whare raupo 85 feet (25.9metres) in length was constructed, ‘with a middle row of substantial pillars, and a well plated roof’. A line of tables ran the length of the whare that seated between 400 and 500 people.

All the principal Rangatira of the Northland region had been invited to attend, as well as a number of Europeans. The ‘festivities’ lasted for two days and cost the hosts a not inconsiderable sum of £270.00 pounds.

Tuku and the Politics of Gifting

The act of gifting, or tuku, is never a frivolous act in Māori society. It is an overt expression of friendship and acceptance, or recognition and acknowledgement between two parties, usually accompanying an important social event. It can be a very personal expression and acknowledgement of a relationship; or a very public declaration. The exchange of gifts carries with it social obligations which are symbolically represented in the thing given, usually something like a cloak, hei-tiki, taiaha or other items of personal or tribal property.

A part of the obligation is the inherent understanding of reciprocity, that at some appropriate time in the future, sometimes many generations later, the item gifted would be returned to its original owners.  Sometimes something else might be offered in its place.  But generally some act of reciprocity would be made to restore the balance between the two parties.  This cultural misunderstanding has created discomfort among Māori when these taonga (cultural treasures) gifted to Europeans, often teachers, doctors and government officials working in Māori communities, have been sold by their descendants instead of being returned to their source communities.

This kahu ngore has been made using the same process as the prestigious kaitaka cloak, but without the elaborately patterned ornamental border of the latter.  Ngore can be identified by the decorative woollen pompom attached to the foundation, or kaupapa, of the cloak.

Ngore appear to have been a common, even popular fashion trend, among weavers during the mid-Nineteenth century, and various types of ngore can be seen in the art and drawings of early colonial artists; and later in early photography through to about the 1870s. Curiously, today they appear to be under-represented in public collections, relative to their apparent earlier popularity.