“I have roots here…”: Climate change and Tuvaluan futures

This week is Tuvalu language week and the theme is “Tuvalu tau gana ko tou lagaifakalaga Tuvalu, your language keeps your culture and identity afloat”. Over the past week curators from the Pacific Cultures team have highlighted key Tuvalu artefacts and stories from Te Papa’s collections. Today’s blogpost is from Rachel Yates (Pacific Cultures Curator), who writes about the impact of climate change on potential Tuvaluan futures.

When thinking of Tuvalu, immediately my thoughts drift to climate change and predictions that, most probably in my life time Tuvalu will sink and be lost to rising sea levels leaving a displaced people – how depressing!  Whilst this issue is of utmost importance and the need for the world to reduce carbon emissions is great, a recent article I read reminded me that in the midst of this global debate, climate change and its consistent spotlight on Tuvalu has subsequently positioned the Tuvaluan people as powerless victims and future refugees at the mercy of superior countries and their policy-makers.  The article highlights how these framings of Tuvaluans are detrimental to the community’s identity and strength.   Rather than migration and cultural changes being a catastrophe, Tuvaluans acknowledge that they are inevitable and have been and will continue to be part of daily life for Tuvaluans.

With this in mind, this blog will focus on Phallo Haulangi, a Tuvaluan voice who migrated to Auckland in 1956 at just 15 years old and whose life in Aotearoa agrees with Farbtoko & Lazrus’ point that for Tuvaluans,  “migration can be considered a source of economic and social strength” (2012, p. 388). 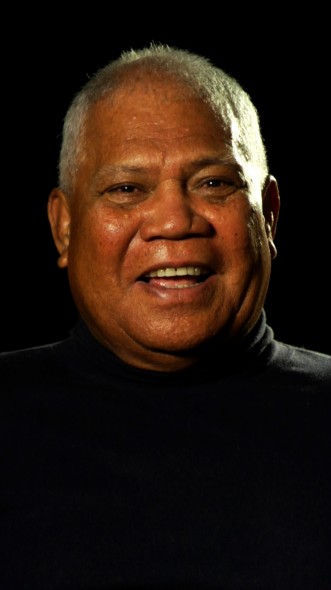 The Living Portraits section of the exhibition Tangata o le Moana; the story of Pacific people in New Zealand, features Phallo Haulangi from Nanumea, the north most island of Tuvalu.  Haulangi identifies as a Tuvaluan but has made a life for himself and settled in Te Kaha, a small community situated in the Bay of Plenty.

After receiving a teaching certificate, Haulangi was stationed here as an educator and adopted by the local Māori community.  Immediately he felt a connection with Te Kaha residents and was drawn to the popular local activities of fishing and diving as this reminded him of Tuvalu.  Haulangi also enjoyed being exposed to new interests that included pig hunting and wildlife, and can speak both English and Te Reo.  Haulangi’s testimony noted the progress of Polynesians in his experience as seen through their ability to speak English and gain work. Haulangi’s sense of belongingness was evident as he takes a moment to address Māori in Te Reo who had become his adopted family and states that “Like the flax bush, my wife and I have roots here”.

This quote, Phallo Haulangi’s life and the presence of a Tuvalu voice in Tangata o le Moana are proof that migration does not lead to a hopeless existence, but rather it can be the avenue to greater work opportunities and an exposure to cultures in a way that would have been impossible otherwise. When considering the effects of climate change, we have a responsibility to listen to those directly affected and rather than solely deeming those that leave Tuvalu as powerless refugees and merely evidence of a global crisis; migration as relocation, is one of many adaptation options that can potentially be positive and empowering for Tuvaluans.

2013-10-03
Previous Post: NSTP, Yeah you know me
Next Post: Bridging the gap: Monet and American artists at Giverny