I’ve been asked a lot of questions about why some of the new acquisitions were pursued and why they were put into this show, so hopefully this entry will help answer some of the queries and shed light on the curatorial decisions made for Uniformity.

In my last blog Uniformity: Why Uniforms Matter, I talked about the reasons for an exhibition about uniforms. And I promised in that last blog to talk further about some of the Māori uniforms included in the show. So for the next few blogs, I’m specifically going to talk about the seven uniforms from the Mātauranga Māori collection which also happen to be brand new acquisitions for Te Papa.

Uniformity was a collaborative exhibition between the Mātauranga Māori and History collections. This meant there were two curators, Stephanie Gibson and me, working on the show and deciding on the objects for inclusion. In this blog, I’ll just talk about the seven new acquisitions and go into a bit of detail about why these uniforms were acquired and the storytelling role they each have in Uniformity.

How the exhibition is arranged

There are seven large cases in total in Uniformity, and each of these cases holds a number of uniforms grouped according to a theme. After careful consideration of the potential content and the stories we wanted to tell, the themes selected were:

Just so you aren’t still here reading in a month’s time, I’m only going to talk about uniforms included in four of the cases (the ones with the asterisks*).

In this blog I’ll talk about one of the cases mentioned above – the Military.

The historical roots of uniforms are firmly planted in Military and Ecclesiastical histories, so it is only right that the first two cases that begin the story of Uniformity exhibition focus on examples from the Military and Church.

The Military case was a very satisfying case to work with, and it was also the case that took the most time and attention. Steph and I worked very closely with representatives from the Armed Forces – especially from the NZ Special Air Service (NZSAS) and Clive Robinson Senior Advisor Insignia and Ceremonial Items, from the New Zealand Defence Force.  Clive in particular was personally recommended by Sir Jerry Mateparae to advise and consult on all matters to do with his uniform and his expertise was truly invaluable.

New Zealand military uniforms have inherited a legacy of strong traditions from European military dress. The deeply significant customs and particularities around dressing made it very important that we got everything in the case absolutely right. No detail could escape scrutiny – the correct combination of insignia, the placement of the aiguillettes on the shoulder (a trickier task than you would think), and even the buttons – were all subject to careful examination.

I believe the pains we took to make sure everything was as correct as practicable have paid off. However there are a few very small quirks unique to Sir Jerry’s uniform and his wearing preferences, which some eagle-eyed uniform experts out there might spot. But I won’t highlight them, I want to see if anyone can pick them out.

From the beginning of exhibition development, the military theme was a huge influence on how the Uniformity exhibition team envisaged the show.  The image above is the main graphic identity designed for the show by our Graphic Designer Nick Clarkson. You’ll see the strong silhouettes of soldier-type figures, male and female. Further, look at the bold red (which I loved from the beginning, when Nick suggested the use of it in the graphics) which reference the red in the Military case; and the use of camouflage patterning in the typography, all of these elements underline the significance of the military uniform story in the overarching show narrative.

On its own, this splendid uniform even without any mention of its very famous donor is remarkable enough. It is a wonderful example of khaki Service Dress, with accompanying regalia and insignia to demonstrate the wearer’s service history, and that he is of exceptionally high rank.

Between 1 May 2006 – 24 January 2011, His Excellency Lt Gen The Right Hon Sir Jerry Mateparae GNZM, QSO (Ngāti Tūwharetoa and Ngāti Kahungunu), served as the Chief of Defence of the New Zealand Defence Forces, a remarkable epoch in a long military career. Enlisting in 1972, Sir Jerry rose through the ranks to become the first Māori Chief of Defence in the history of the military – the highest commanding appointment possible in the defence forces – in 2011. At the conclusion of his service as Chief of Defence, he was subsequently appointed as Governor General, the second Māori to be so – a role he continues to perform.

This uniform that you see here is a Ceremonial Service Dress All Ranks uniform. Known as a Ceremonial 1A, it is worn by all ranks of the NZ Army on formal occasions and directly influenced by the khaki British Army service dress adopted by the New Zealand Army in the early 20th century.

This uniform consists of long dress trousers, a short sleeved shirt and tie, and the service dress jacket. The trousers and jacket are made from polywool, by Albion Clothing in Christchurch. There are two patch pockets with box pleats on the breast, and two bellows pockets on the lower part of the jacket (called the skirt). The anodised brass buttons are removable and feature the words ‘New Zealand Defence’ with the 4 stars of the Southern Cross. 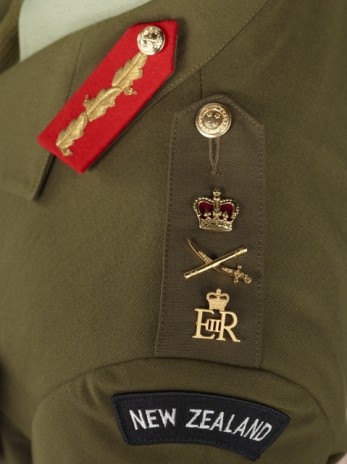 Close up of shoulder rank badges.While this uniform was issued to All Ranks, there are a number of specific symbols on this uniform – on the breast, shoulders and upper arm – which distinguishes Sir Jerry’s very high rank and the corps to which he belonged or commanded.

Do you notice the prominence of the red – the colour of the gorget patches on the collar, and the puggaree on the lemon squeezer? Visually the red is not only very striking but also herald back to the historical use of red in British military uniforms (as demonstrated by the inclusion of the Gordon Highlander’s jacket). In this example, the red on the puggaree denotes the wearer is permanent infantry staff, and the gorget patches as worn on this uniform are indicators of rank signifying the wearer is above the rank of colonel.

And do you also note the use of Māori kōwhaiwhai design on the waist sash? Sashes are very old elements of military dress, which also signify rank. The incorporation of Māori motifs into the uniform references a strong Māori identity present within the New Zealand Army culture. As this quote from the NZ Army website reveals: “The unique culture of the New Zealand Army has been shaped and defined by a range of complementary influences. These include the martial traditions of the British soldier and the Maori warrior; our history, heritage and experience of war; and the characteristics of wider New Zealand society.”  In the sash, you see the two distinctive cultural expressions brought together – the sash form and the kowhaiwhai patterning – creating a new uniform element which is now unique to the NZ Army.

This strong Maori identity is further observed  in the NZ Army badge, a Herald of Arms that shows an officer’s sword crossed with a taiaha kura. When you come visit the exhibition, you can see a taiaha kura in the military case. One other interesting facet to the taiaha kura is the use of red cloth to form the tauri (collar) of the taiaha kura included in the show, as well as awe or Maori dog hair tassels. Ordinarily kākā feathers would have been used to create the tauri, as in this example but some tauri from the mid century were said to have used the red cloth from soldiers’ red-coats. These examples are however very rare.

There are a number of additional elements that we added to Sir Jerry’s uniform in order for the visitor to see how he would have dressed as Chief of Defence at very formal occasions. These elements have been borrowed from the New Zealand Defence Force. The Lemon Squeezer with its puggaree and hat badge, the aiguillette, the general officer’s sword and leather gloves, the medals and the ceremonial sash, have all been borrowed and I hope to acquire them permanently, so we can always be able to see Sir Jerry’s uniform dressed this gloriously.

When His Excellency Sir Jerry agreed to gift this uniform to Te Papa Tongarewa, it was cause for a bit of celebration among some of the curators. His status and the significant life achievements of Sir Jerry mean that he is a part of New Zealand history and his uniform will be able to tell his story for future visitors to Te Papa.

Please take your time to look at this ‘decoding’ graphic that was produced by the Uniformity exhibition team, which helps the visitor to understand what some of the components of the uniform represent.

My sincere thanks to History Curators,  Stephanie Gibson and Michael Fitzgerald for their expertise and for reviewing this entry.