This is the third day of the Festival and there are way too many things and sights to properly explain. I can only give samples and highlights, and even these are too numerous to do it justice. The NZ delegation has jumped into action, performing and creating. The Festival village is buzzing with all the whare heaving with artists, customary and contemporary practitioners, curious visitors, booming music from the Pasifika stage, percussive sounds of toki carving into wood everywhere – and the occasional buzz of a chainsaw – its modern day stand-in.

To recount my best moment so far though….the festival opening started extra early on Monday morning. We had a 4am alarm and blearily jumped on to buses and headed into darkness to a beach (which I don’t know the name of, I apologise). A drizzly, warm morning, the beach was jam packed with people, all dressed in traditional fibre kakahu, lavalava, or bright polo shirt uniforms; a vast array of different bodies and appearances, there must have been at least 1000 people on that beach. Maybe more. We were treated to a fireworks display, the first since 1972 in Honiara, and a gift giving ceremony. There was an expectant feel in the air, and everyone seemed to be focused on the water rather than the official stage on shore. 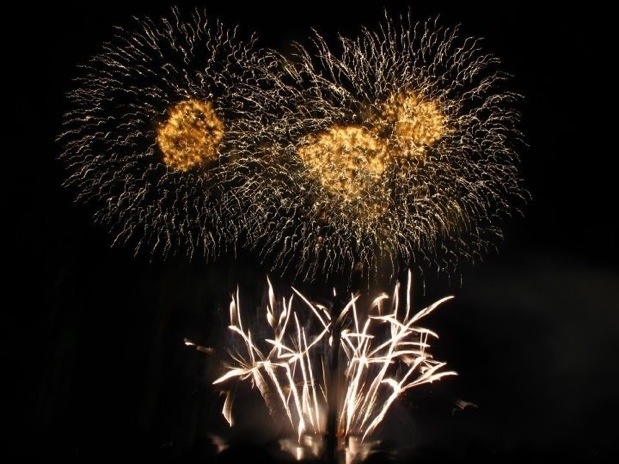 Impatient because I couldn’t see anything, I wormed my way through the crowd to the shoreline, and I am so glad I did. Before me, in the dawn light, were seven magnificent double hulled waka called waka hourua, anchored several hundred meters out to sea. Added to this, were about 8 small Solomon Island waka, with at least 15 men in each. The scene behind me was a cacophony of sound but out in the ocean, it seemed silent. 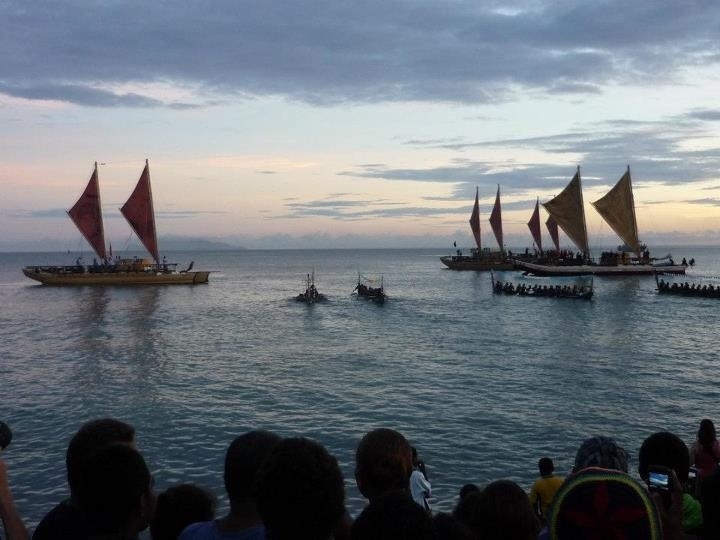 I was speechless and embarrassingly emotional (sookie lala is how my family would describe it). The sight of the waka was overwhelming and for a long moment, I wondered if this was the sight that the ancient Tūpuna of the Pacific saw, when voyagers from afar visited their islands. Unable to compute what I was seeing, I just stood and gawped and had a bit of a tangi.

An amusing break in the emotion of the moment were the smaller waka from the Solomons, which raced up and down the shore performing what I can only describe as boy racer waka burnouts. They whizzed into shore, stealing a person and taking them out to sea. Only to speed back to the shore again at speed, water braking on the beach. Very funny and fabulous to watch.

The silent waka hourua stayed further out and maintained their impressive appearance. They are part of a monumental undertaking called the Pacific Voyagers project where seven replica waka are sailing through the Pacific Ocean, retracing ancestral links and drawing the world’s attention to the health of our oceans. Populated with crews from around the world, these seven waka have travelled as a fleet since early last year. There are two Māori waka in this whanau: Haunui captained by Hoturoa Kerr of Tainui; and Te Matau a Maui captained by Frank Kawe of Ngāti Ranginui and Ngāti Kahungunu (and he’s from my kainga tūturu – Tauranga!). Their voyage has been immense and breathtaking. You can read more about it here.

The waka slowly made their way closer to shore, and as they did so and the morning light grew brighter, the people on the beach began to sing, chant, wave and call out. The NZ delegation raced to greet the Māori waka Haunui and Te Matau with karakia, mihi and haka pohiri, to which the waka crews responded in kind. 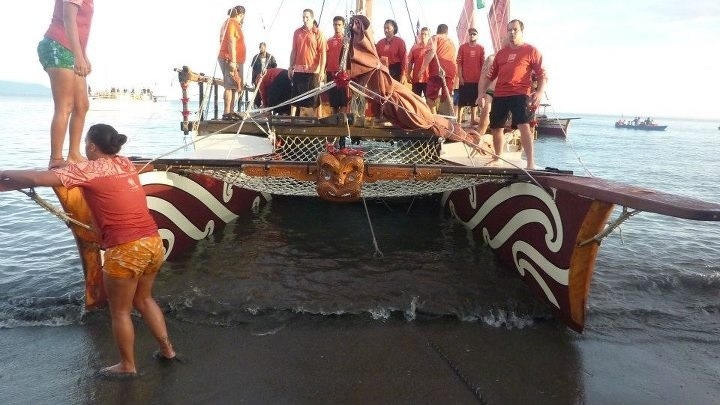 It was an awesome morning which only got better when members of the delegation were invited on to the waka to sail to their mooring, about two hours sail along the coast. I clambered aboard Te Matau, and again was shamelessly emotional (I blame the early start).

The generosity and then the stories shared by the crew and by other manuhiri aboard the waka was wonderful. As well as some of the crew, I met two lovely women from Hawaii, and one beautiful lady from Tahiti who had sailed on one of the waka. They shared their own voyaging and cultural stories with me, as I did with them. It was a peaceful few hours and my definite highlight of the festival so far. I didn’t want to get off! 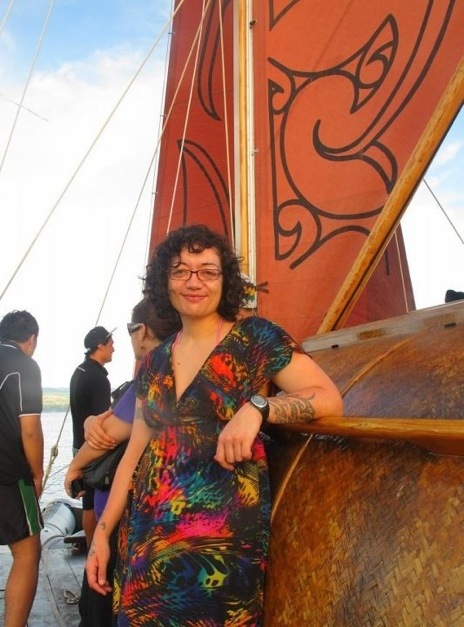