More stories than you can shake a tokotoko at

I’ve only been a curator for 7 months and even if you were the brainiest most well read person in the world, a curator is really only as good as their knowledge of their museum’s collection.

So in familiarising myself with the Taonga Māori collection at Te Papa, I’ve been systematically going through all the collection areas, drawers, shelves and trawling our collection database, trying to cast my eye over as many of the taonga as possible.

With 35,000 pieces in the Māori collection alone, you can imagine this is going to be a long getting-to-know-you process. There are stories and mysteries at every turn in the museum, more than you can shake a tokotoko at, the place heaves with detective trails just waiting to be followed up. I’ll eventually try and cover them all, should take me about 200 years.

But for this blog I thought I’d talk about one interesting little object that I stumbled across in one of the drawers in our collection stores.  In a small metal drawer, secured in a cliplock plastic bag was this little oddity. 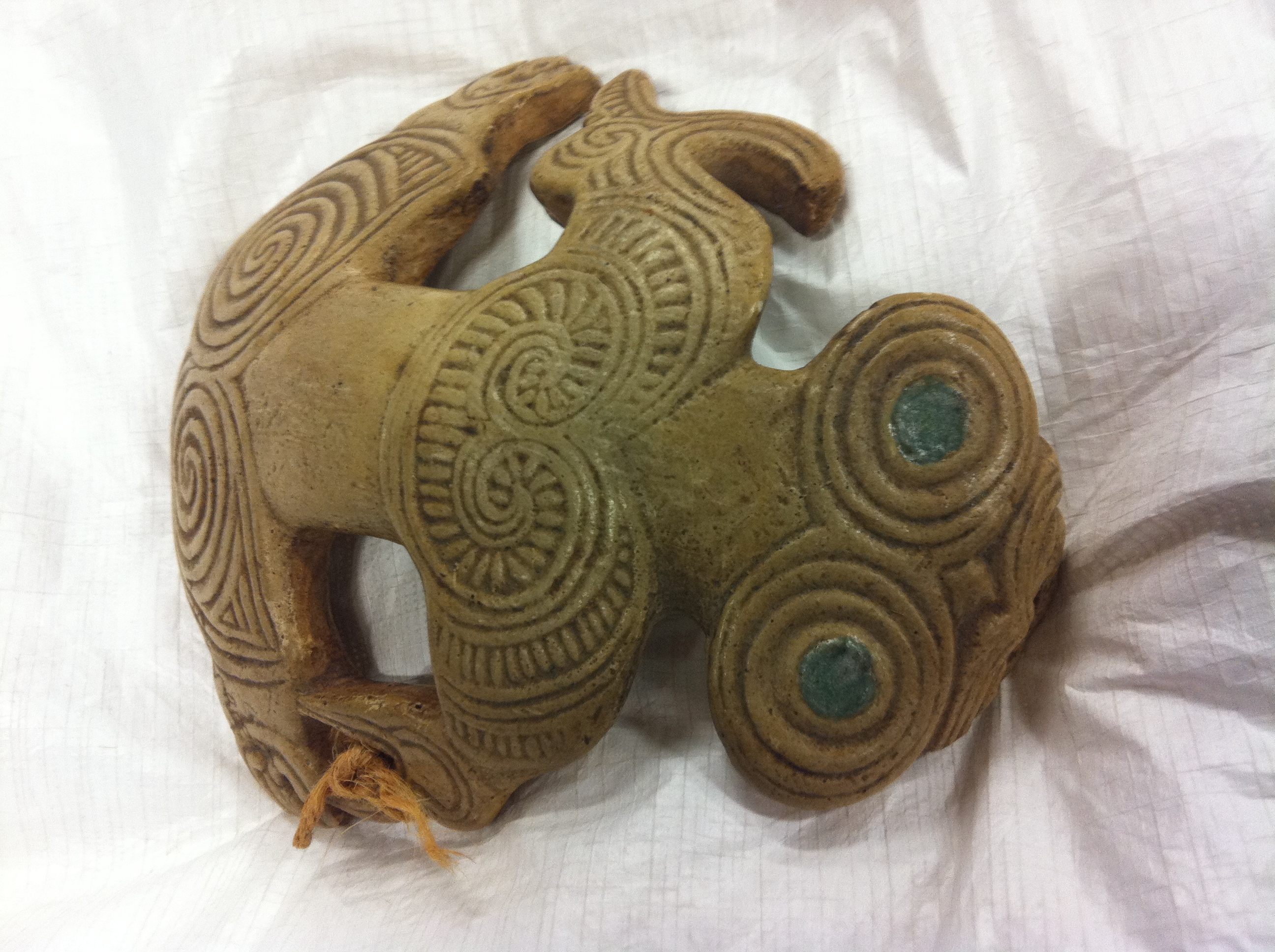 Small, about the size of an outstretched hand, and weighing about as much as a tea cup – it had no information other than a small accompanying cardboard label in the plastic bag. 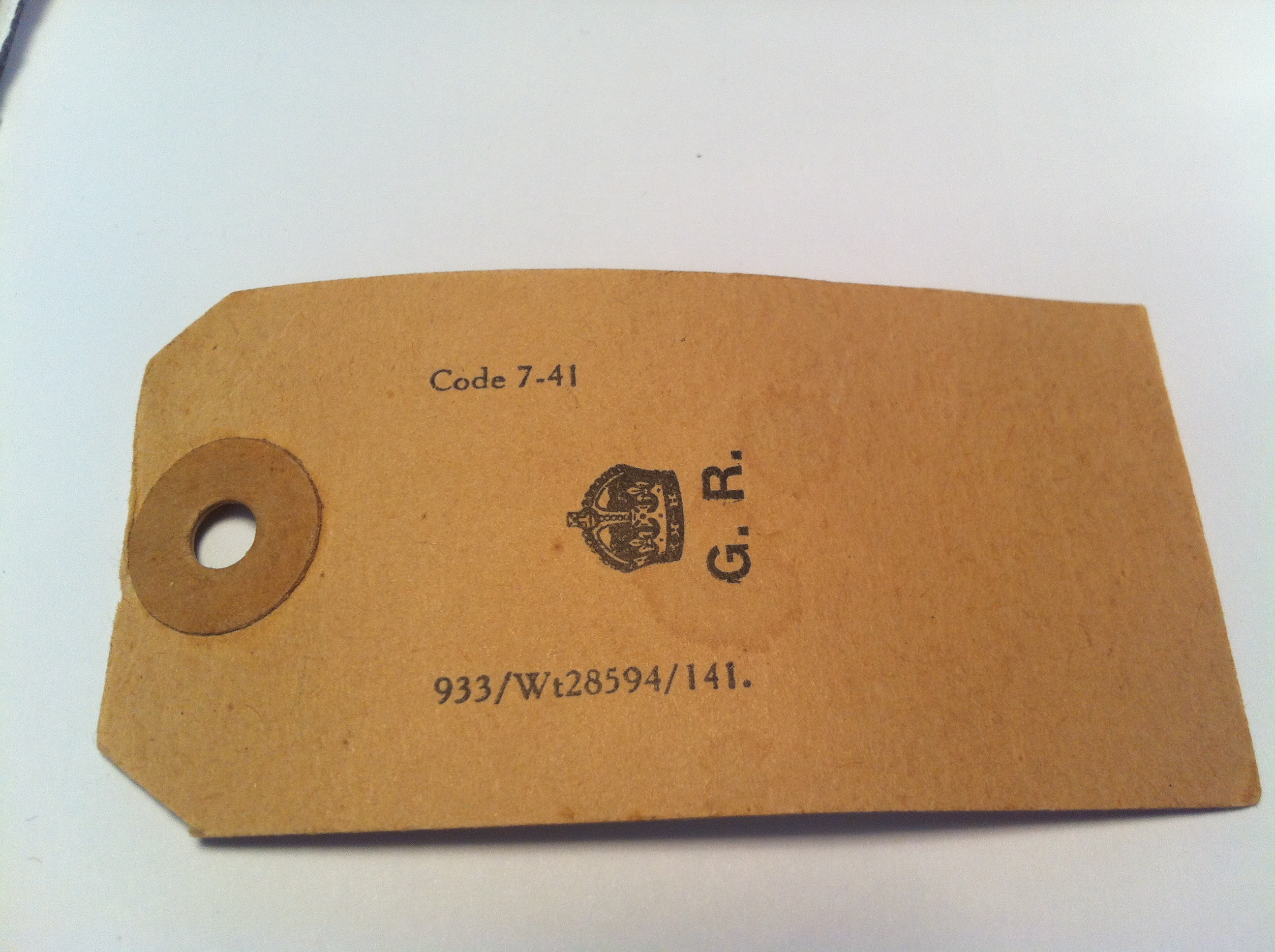 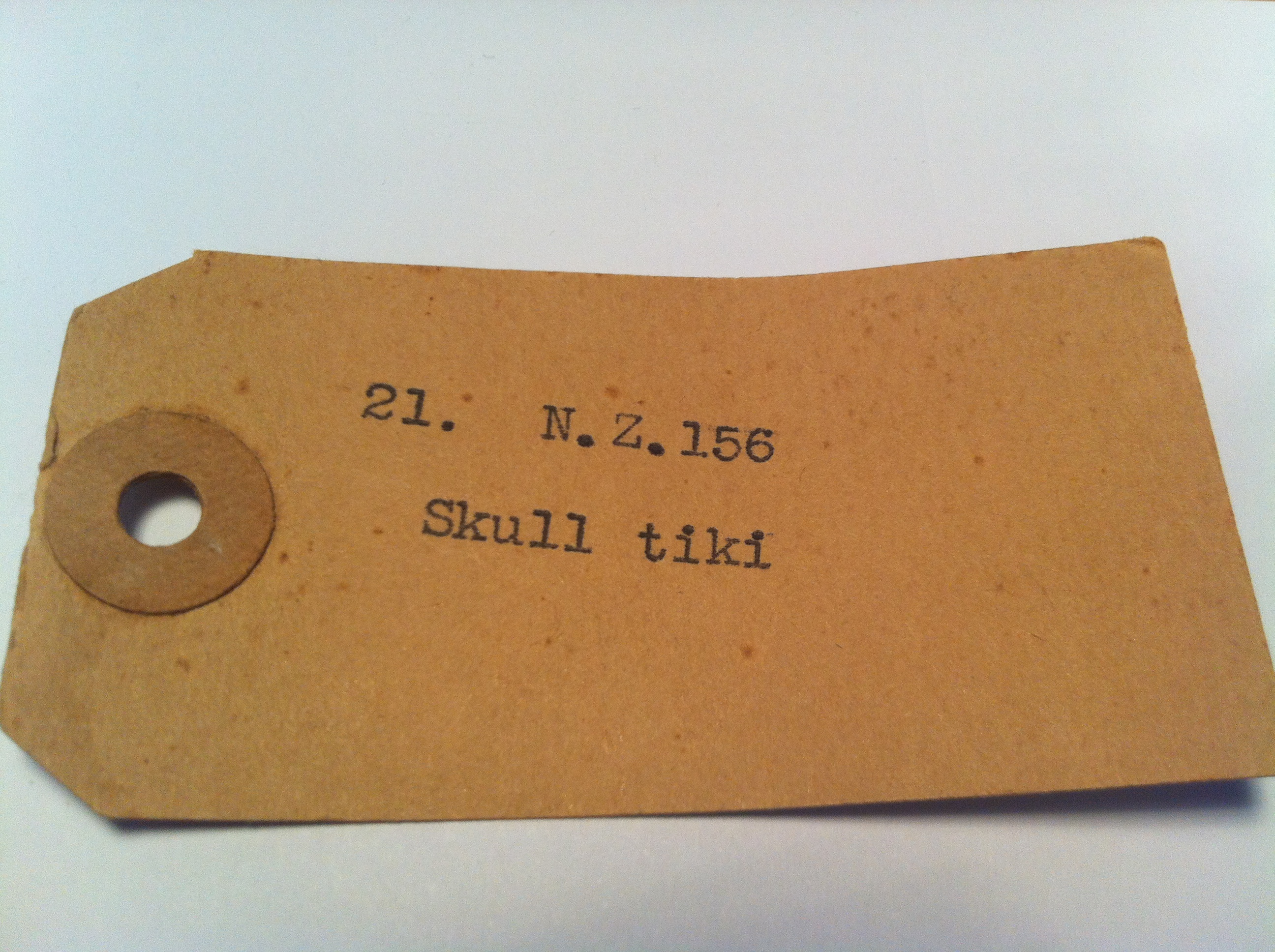 Now immediately before anyone gets the wiriwiris, this isn’t a skull tiki.

Even I blanched a bit when I saw the label but most of the objects made from modified human bone or remains are all in a specially designated room in Te Papa, well-secured and with restricted access. So I knew it was highly unlikely that this was human bone. It was too heavy and dense a material, and there was a glossy quality to its surface that looked too artificial to be bone. I guessed it was probably ceramic or something along those lines but held off making a decision until I had investigated everything.

I examined it carefully, photographed it, weighed it, noting any strange qualities or clues. It was a beautifully carved four-limbed creature. Piko-o-rauru (plain spirals) embellish the buttocks, while rauru (notched spirals) are found on what could be termed the back/shoulders. The head is small with two large very round blue-glazed eyes, a mouth with teeth, and a small suspension hole. The splayed left hand is held upright while the right hand terminates in a manaia joined to the right foot. On the reverse side, there are pencil markings and cross-hatch markings, presumably from a mesh cloth used in a plaster-making process (establishing pretty quickly it was probably made from plaster or ceramic). A small length of coarse twine is tied to the hole between the right hand and foot. 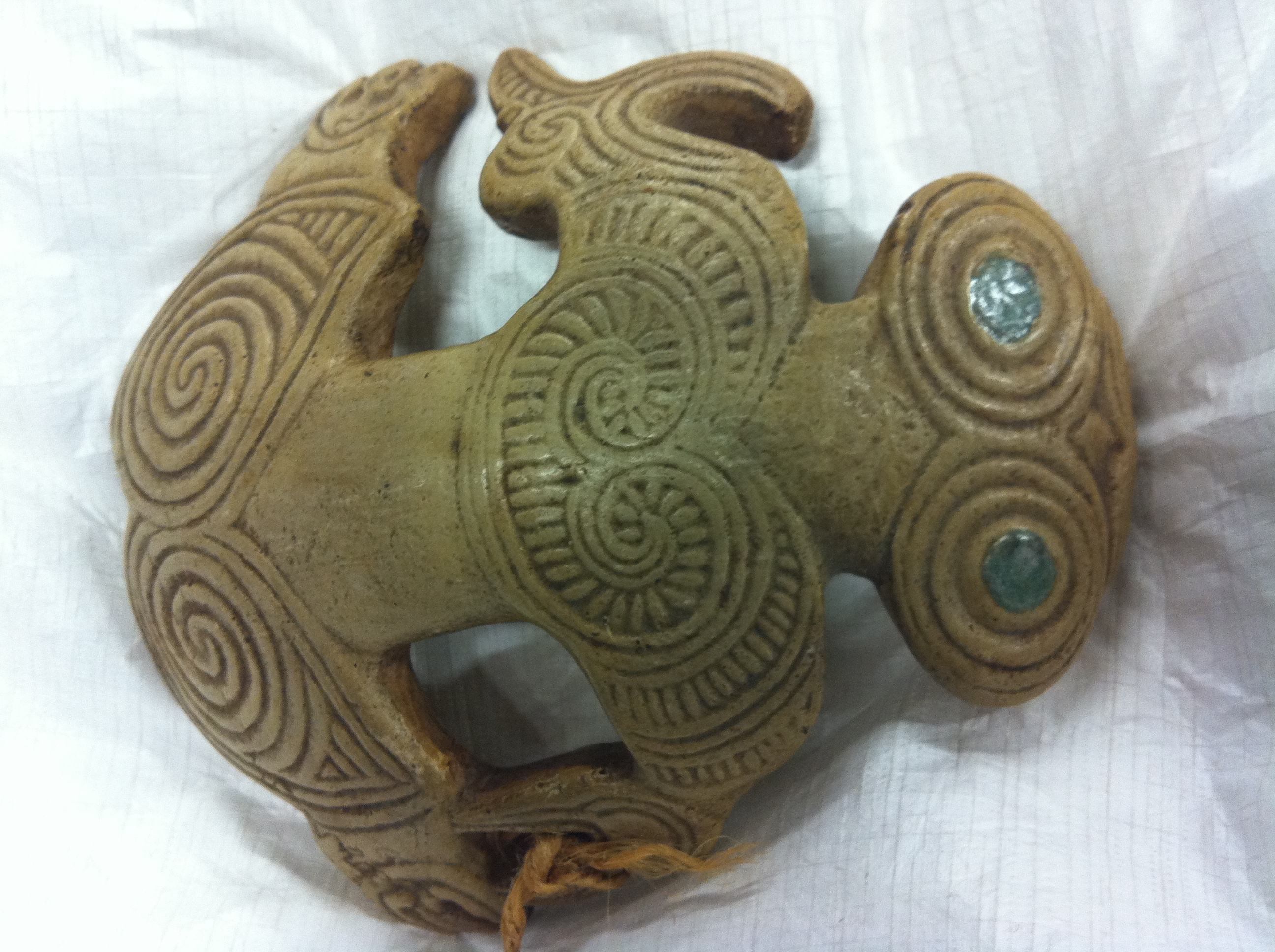 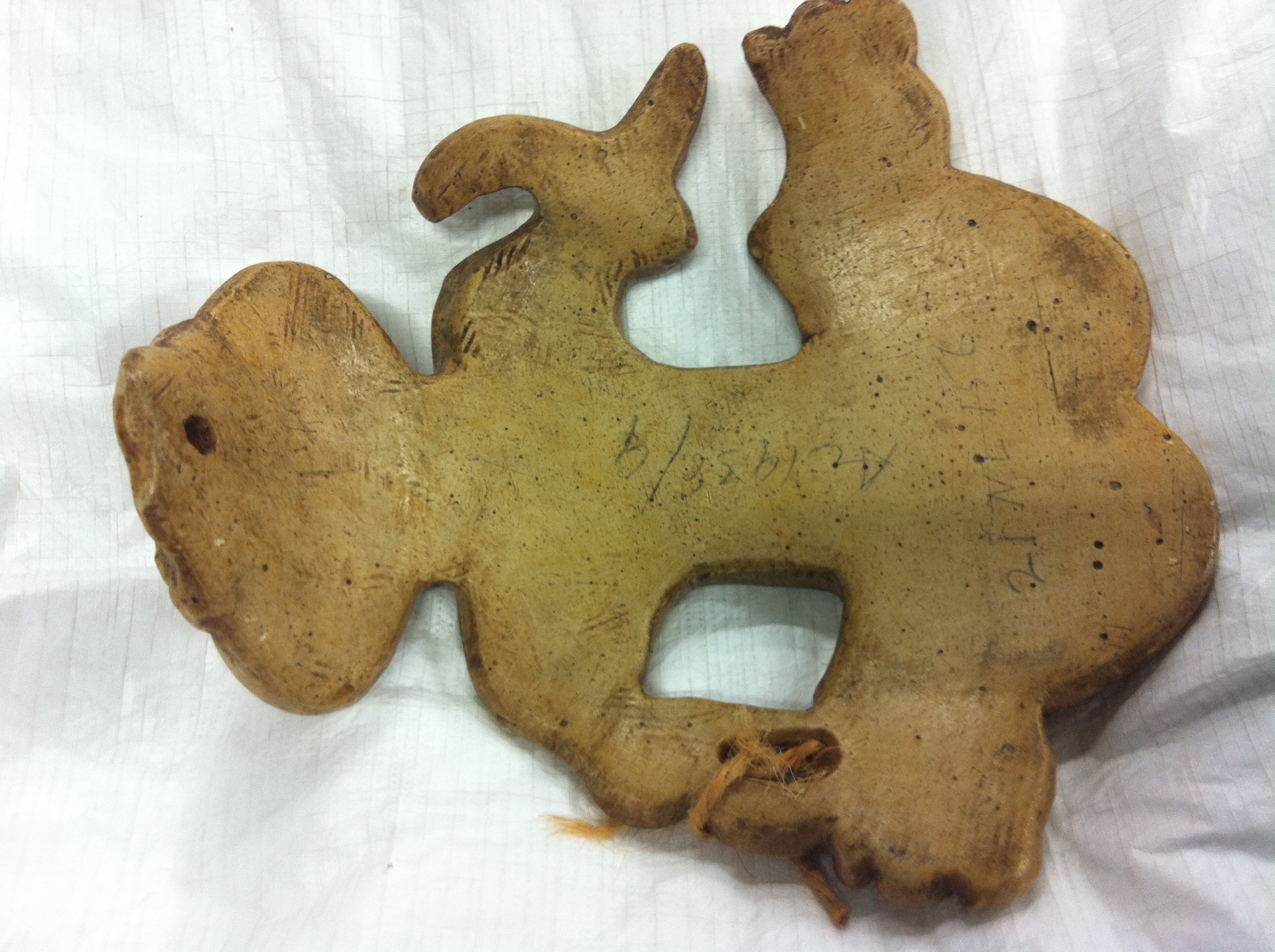 Once I was satisified with the physical once-over of the object, I went to the archives to check if any record existed of it (none did). So I happily went on a detective hunt (the fun part of the job).

First thing is start with the written material that came with the object. The cardboard label held a clue that I used to establish the most probable period or year the replica might have been made. The G.R. and the image of the crown is a definite time marker. The G.R. stands for George Rex, a regal stamp for George V. George Vs reign started in 1910, so the label has helped me figure out that the replica was made at least after 1910 and no later than 1936, when George V’s reign ended. Good, timeframes are handy for museum records…

The second lookup was to scan for any mention of ‘skull tiki’ and I found several references relatively quickly. The best were found in two written sources: a 1932 JPS article by Henry Skinner about Māori amulets and a large book published 1898 by James Edge-Partington called Ethnographical Album of the Pacific Islands. The James Edge-Partington book was probably the most helpful. In the late 1800s, Partington – a keen collector and ethnologist of Pacific material – researched and documented private and public collections of Pacific and Māori material. These collections were found in NZ, England, and Australia; his book is a fascinating sketched record of holdings at that time. And nestled within the pages of this enormous book was the following sketch of a “skull tiki” held at the British Museum, recorded between 1890-98 (Partington’s research period for the book): 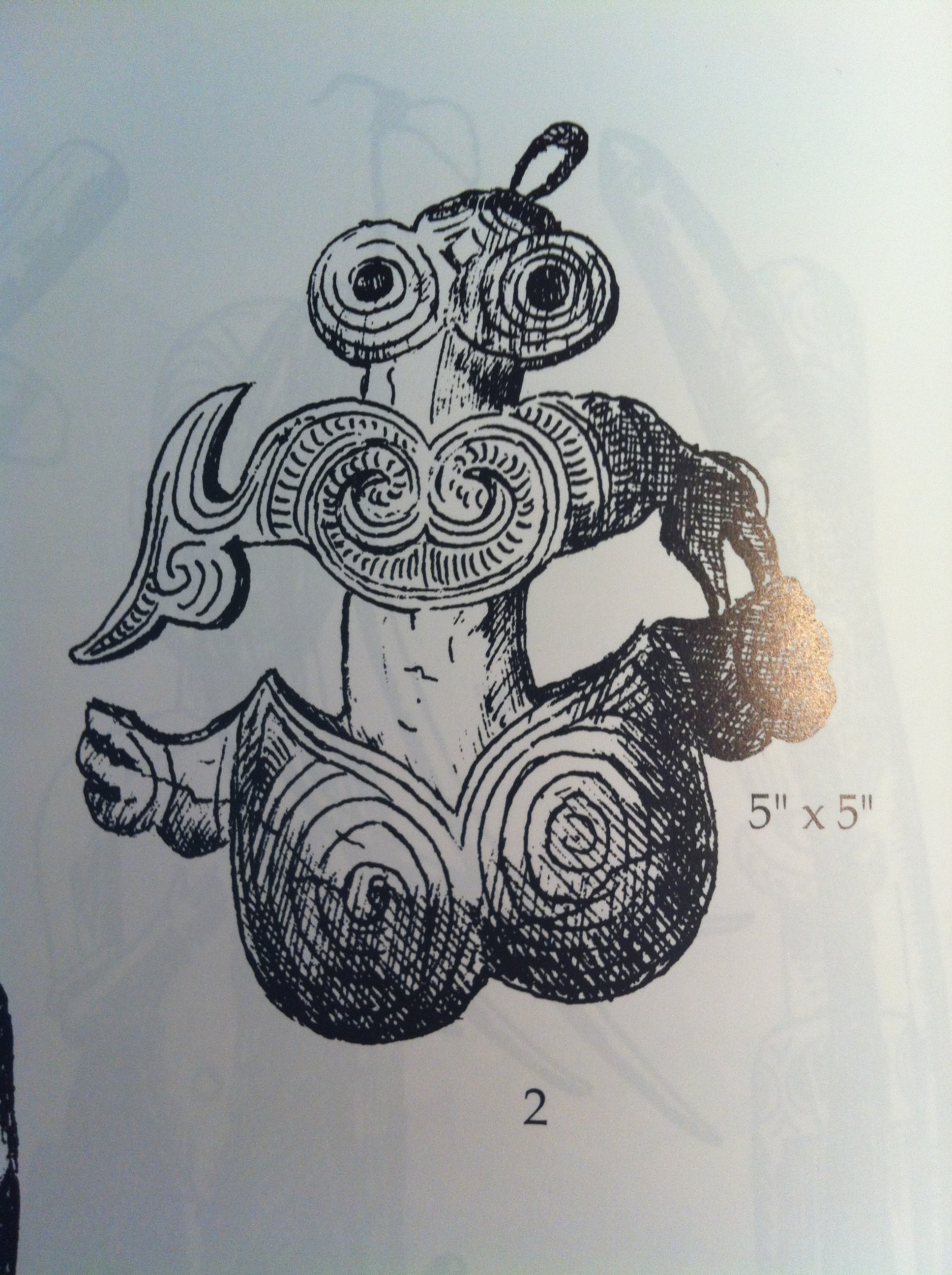 Bingo. So what I had at Te Papa was probably a plaster replica of a British Museum original. I tracked the records at the British Museum and reconciled on our database where the Te Papa copy came from. The original at the BM is classified as a ‘skull tiki’ and probably from the occipital section of the skull. The British Museum has no acquisition information about this piece but they have made an attribution to Taranaki, early 19th century. It was worn as an adornment, across the chest hanging from the neck. While it is described as a tiki by the British Museum, there has been some korero among my curatorial colleagues and me about whether it can be rightly called a tiki. It deviates from the template a hei tiki usually conforms to. But that can be left for a proper discussion at another time.

So I now have a source for the replica and a year it probably made its way to Te Papa’s museum predecessor – the Dominion Museum. But what was still unknown was how did it get into the collection store? Why did Te Papa have a copy of a British Museum piece? To answer that required more archival digging…

Because I now had a date (circa 1910), I hunted through old correspondence held from that time in the museum’s archival records. There was one letter from Augustus Hamilton dated June 4th 1909 addressed to James Edge-Partington requesting permission to take a cast copy of a putorino (bugle flute) that had caught his attention after reading Edge-Partington’s book mentioned earlier. 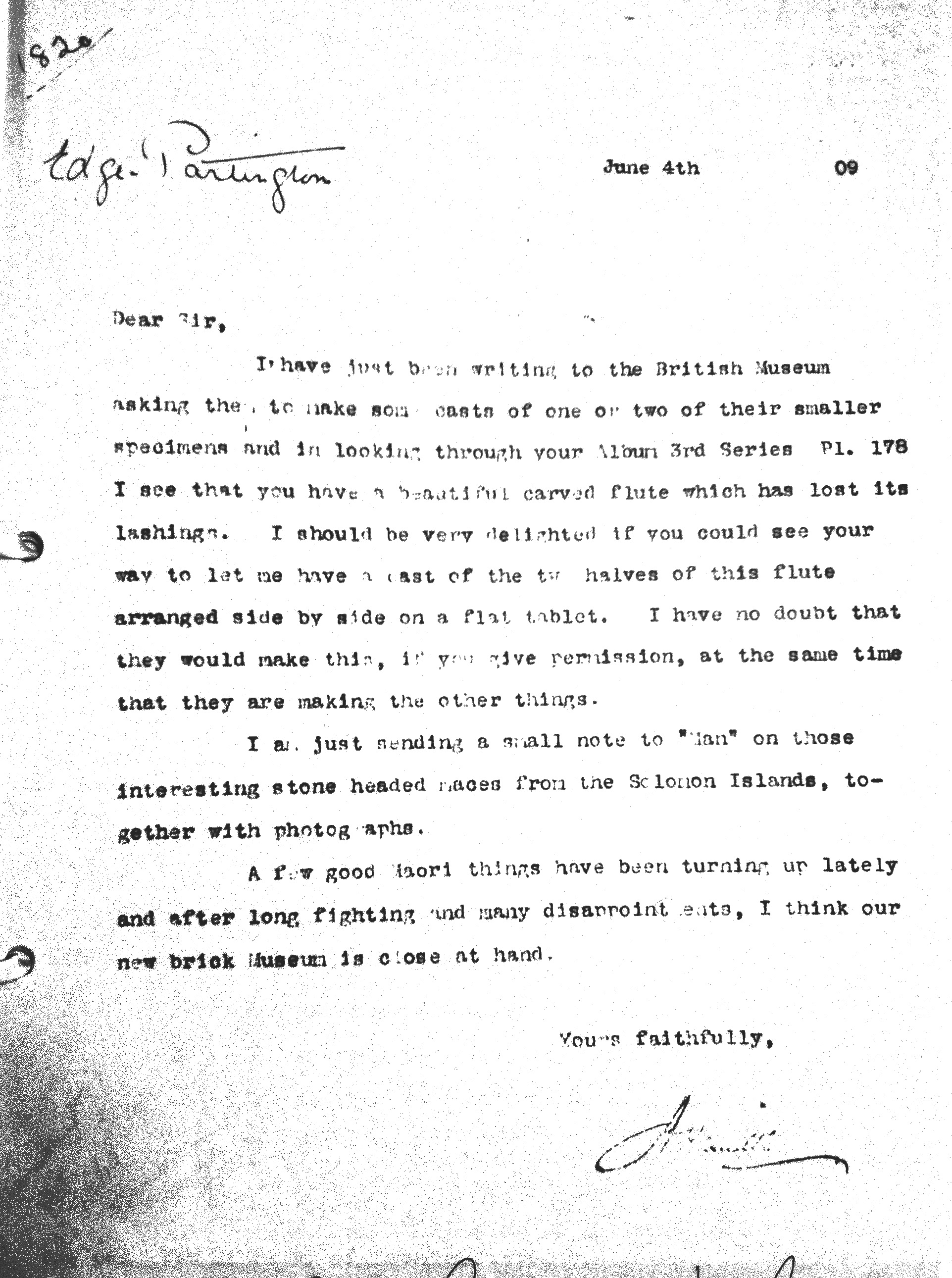 Also in the letter, Hamilton mentions he had written to the British Museum asking for casts of pieces he had seen. It suggests that as he read Edge-Partington’s Ethnographical Album of the Pacific Islands, Hamilton may have been treating it almost like a shopping catalogue and, he would have seen the image of the British Museum skull tiki and added that to his list of requests for replicas.

So the mystery is sort of solved…the British Museum ‘skull tiki’ would have been seen by Hamilton in Edge-Partington’s book around 1909. Hamilton then sent a request to the BM asking for a cast replica to be made, which would have made its way back to New Zealand around 1910. And ever since then, it has sat in the Collection Stores. There are no records of it ever being exhibited and certainly, it has never been researched until now. It had never been registered and no records were ever kept with it and, the funny thing about museums, if an object isn’t registered or recorded, it is almost as if it is invisible or doesn’t exist.

So now after a bit of hunting, we are able to figure out this quirky little object’s history and reconcile the records accordingly. It is a replica of an even more mysterious original held in a museum thousands of miles away. And even though it’s a replica and easily dismissed because it is a copy, I think its existence and story alludes to some interesting trade/copy traditions between 19th/early 20th century museums. I’m not sure if today you would see such a willing response by a museum to copy a collection item for another museum. And in a time of Google or Collections Online where access to other museum’s collections around the world is usually at the click of a mouse button, it is should be easy to imagine how eager museum professionals of the late 19th/early 20th century would have received or taken up opportunities presented by a large book such as Edge-Partington’s tome.