Following initial consultation with community leaders, a refugee background youth forum was held at Te Papa in early 2009. This confirmed the exhibition’s concept: ‘Optimism in a new land’, with the three themes of Challenge, Connection and Freedom. Subsequently, a youth reference group was established in Wellington comprising of around 10 young people who meet with Te Papa staff fortnightly. The group has helped with choosing material for the exhibition and provided feedback to Te Papa’s development team, ensuring the project is defined by young people.

Next, a set of 12 professional tutorial workshops were held with young people in the six main refugee settlement areas: Auckland, Hamilton, Palmerston North, Wellington, Nelson and Christchurch. Young people from refugee backgrounds were employed to rally other young refugees to attend the workshops.

The exhibition presents the young people’s stories in a range of creative, digital mediums including art, short film, poetry, performance, screen-printing, cast glass and digital story-telling. It was underpinned by the ‘capacity building’ approach, whereby the young people were empowered to tell their stories in their own way and upskill themselves in the process.

This award is really exciting for the Mixing Room team because it recognises that the project is bigger than the exhibition itself.  That we can measure success using a variety of models including that the process is as important as the end product.

A taste of what is to be included in the exhibition can be viewed on the new Mixing Room blog. You can also watch the music video ‘Belong’ on Youtube. The end product, the multimedia ‘Mixing Room’ exhibition will open at Te Papa on April 10 2010 and will run for three years in the community gallery.  So come along and be challenged, get connected and feel the freedom we all so luckily share in this great land of ours! 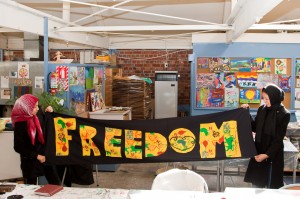