Stars of the Matariki cluster: Hiwaiterangi

There are nine stars in the Matariki star cluster. It has many different names around the world, and is known as the Pleiades – its ancient Greek name – or the Seven Sisters in English. The Hawaiian name is Makali‘i, or ‘eyes of royalty’, and in Japan it is Subaru, meaning ‘gathered together’.

The star Hiwaiterangi (Greek: Calaeno) is the star associated with granting our wishes and realising our aspirations for the coming year. Curator Pacific Cultures Rachel Yates (Vaisala) talks about the whetū Hiwaiterangi and the connection to our collections. 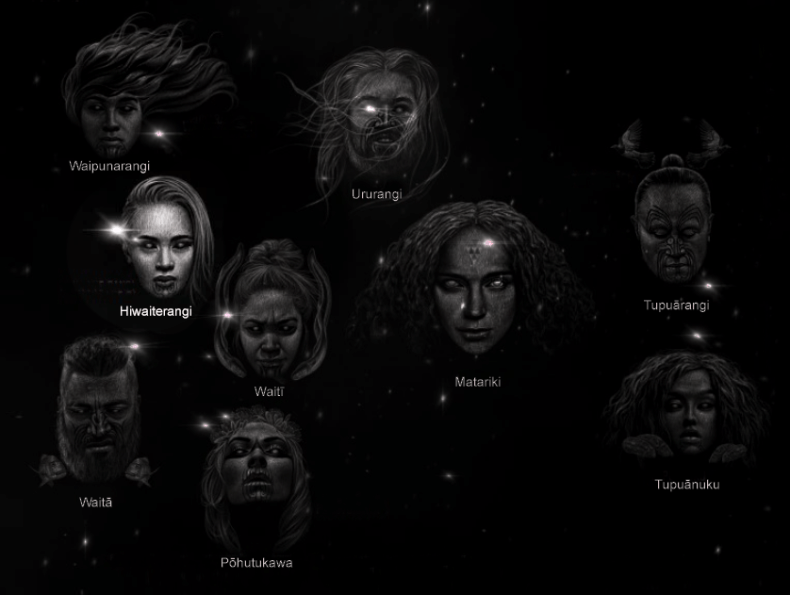 Twinkle Twinkle Little Star, How I wonder what you are…

In the lead-up to Matariki 2022, Professor Rangi Mātāmua has been leading wānanga for Te Papa kaimahi in which I was fortunate to participate. Learning about the maramataka and the marking of the Māori New Year with Matariki has been both exhilarating and overwhelming.

There are so many stories and so much mātauranga to unpack and consider. I was full of wonder after every session, in awe of Māori astronomy, and the rich story-telling embedded within.

The elation though was coupled with anxiety. This intricate system of time was completely new to me, and I was trying my best to digest and retain as much as possible.

I often joke about being an urban Sāmoan whose closest connection to te taiao comes through the iNaturalist app; although in these wānanga sessions, I can not deny the unsettling feelings of disorientation and disconnection from my environment and culture I experienced. This was especially so when Rangi would make comparable comments about Matariki in the wider Pacific.

Like most things I get excited about, I started talking about what I was learning to anyone who would listen. I reached out to my local Sāmoan community and asked church members, extended family, friends, staff and other parents at my son’s a‘oga amata about Mataali‘i and Sāmoan understandings of time.

Unfortunately, I have yet been able to locate someone who could speak to Mataali‘i. The responses are best summed up by one of the a‘oga amata faiā‘oga who answered my query teasingly with: ‘ua ō uma toeaina ma lo‘omatua e te mana‘o i ‘ai’ (the elders you seek have departed). In the absence of talanoa and knowledge within my immediate community, I turned to our collections and available literature in the hopes of learning more.

Accounts by Europeans in Sāmoa in the nineteenth century, though lacking in detail and customary knowledge, identify Mataali‘i.

Fetū is the word used to designate all heavenly bodies except the sun and moon. Venus is called the morning and evening star. Mars is the Matamemea, or the star with the sear-leafed face. The Pleiades are called Lii or Mataalii, eyes of chiefs. The belt of Orion is the amonga, or burden carried on a pole across the shoulders. The milkyway is ao lele, ao to’a, and the aniva. Ao lele, means flying cloud, and ao to’a, solid cloud. Meteors are called, fetū ati afi, or stars going to fetch a light; and comets are called pusa loa, or an elongated smoke (1884, pp.202-203).

Sāmoan fetū are connected to myths and legends, but also reveal an active knowledge and language about stars critical to life. The Amonga (Orion’s Belt) was key to guiding travel between Sāmoa and Tonga (Taonui, 2006); a highly visible Le Tāelo (Mercury) translated as a warning for cyclones (Stair, 1898); the direction of fetū ati afi (meteors) could indicate death to a specific family or village (Turner, 1861); and pusa loa (comets) created much ebullience as it was understood to be the precursor of a prominent death or event (Stair, 1898).

In lieu of information about Mataali‘i, many Sāmoan commentators have compared Matariki here in Aotearoa with the spawning and fishing of the annelid worm Eunice Viridis – Palolo (mbalolo in Fiji, balolo in Tonga). Palolo live in shallow coral reefs and emerge once or twice a year for two to three nights. The occasion is marked by celebrations.

The importance of palolo is reflected in the historical Sāmoan names for the months of Palolomua (June–July) and Palolomuli (July–August), a period when families would utilise the palolo they had preserved from the year prior. The actual act of fishing and feasting on palolo occurs during Taumafamua (October–November) which means ‘the first of plenty’ (see Member of the Samoan Society, 1928 for a compilation of lists labelling Sāmoan months of the year).

There are varied accounts of how to calculate the timing of palolo, but generally-speaking palolo is dictated by the waning moon of Taumafamua. Other environmental factors that influence the event include the sea’s temperature, moonlight, tides, and weather; read alongside signs that can include the flowering of the moso‘oi tree or the closing of the morning glory flower (see National Park of American Samoa, 2005 for further information).

Today, palolo continues to be an important Sāmoan marker of the year and a dedicated time for families and feasting.

I have been unable (so far!) to locate taonga and museum catalogue records that reference Mataali’i or Matariki from a Pacific perspective. However, we do have a significant number of taonga connected to the universe and Indigenous beliefs.

These taonga are primarily made from whale teeth, and historically worn by i-Taukei chiefs. Researchers note that the shape of tabua is significant as it resembles the crescent of the moon and is thus a marker for weather and crop fertility.

Civavonovono are highly valued forms of adornment that connect chiefs to divinity through cosmic symbols that include stars (as featured in the example above), serrated suns, and full or crescent moons (see Clunie, 2013 for further information).

Textiles including ngatu, tivaevae, and woven mats feature motifs and iconography that record activity in our atmosphere.

References are also evident in the design and form of taonga. The nbouet were owned by chiefly families and are said to represent the Kanak view of the universe. The blade represents the top of a tree (the world above) and the stub at the bottom of the handle represents the Earth. The handle is an important link between Earth and the sky, connecting the physical and spiritual worlds.

In the spirit of Hiwaiterangi, I end this blog by making the following wish:

That I will slowly but surely build my knowledge of the stars, and that next year’s Matariki blogs will feature epic Pacific storytellers from across the region.

If you or someone you know has something to say about living by the stars in the Pacific – we want to hear from you!

Please get in touch with the author via the comment section or enquiries@tepapa.govt.nz

Find out about the connections to our collections for the other eight stars in the Matariki star cluster.

2022-07-01
Previous Post: Stars of the Matariki cluster: Waitī
Next Post: Women’s rights are human rights: How women in Aotearoa New Zealand gained the right to choose