Stars of the Matariki cluster: Ururangi

There are nine stars in the Matariki star cluster. It has many different names around the world, and is known as the Pleiades – its ancient Greek name – or the Seven Sisters in English. The Hawaiian name is Makali‘i, or ‘eyes of royalty’, and in Japan it is Subaru, meaning ‘gathered together’.

The star Ururangi (Greek: Merope) associated with the winds. Curator Mātauranga Māori Isaac Te Awa talks about how the star Ururangi connects to taonga in our collection. 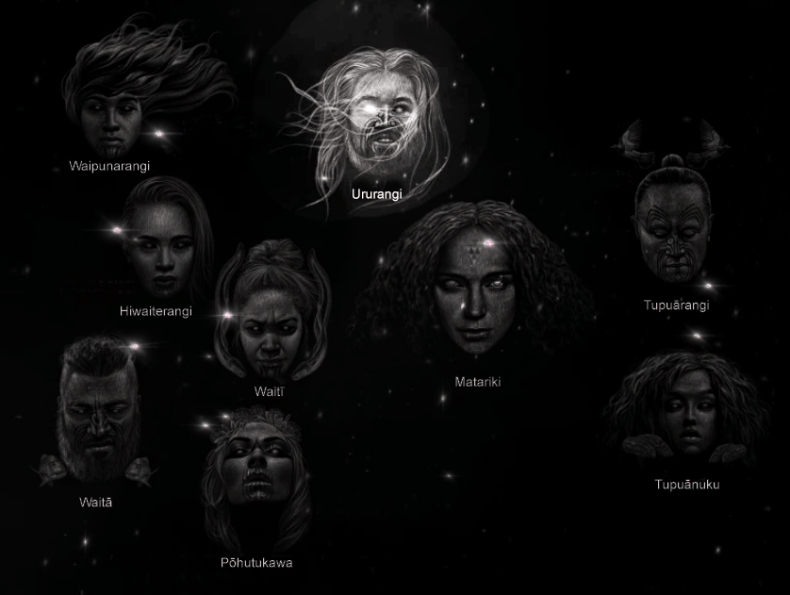 Hoki atu ki tō maunga, ka purea ai koe i ngā hau i Tāwhirimātea.
Return to your mountain, and be cleansed by the winds of Tāwhirimātia.

Ururangi is one of the nine stars within the Matariki cluster. This star is connected with the winds and predicts their movements, and this is reflected by its position as the highest star within the cluster.

In Māori narratives, the winds are ruled over by the atua Tāwhirimātea. While he and his winds are well known for their destructive power, the above whakataukī reflects on the importance of returning home while also reminding us that the winds of Tāwhirimātea can also be gentle, guiding, cleansing, and healing.

Although Ururangi is the star that foretells the winds within the cluster, it is impossible to mention Matariki without referring to Tāwhirimatea – in fact, the name ‘Matariki’ is a shortened version of the name ‘Ngā Mata o Te Ariki Tāwhirimātea’ or ‘the eyes of the ariki Tāwhirimātea’.

Matariki is a time for people to come together with their whānau and friends and in the past, it was a time for people to wānanga and learn. In order to continue the tradition of wānanga, I will reflect on some taonga from our Taonga Māori Collections guided by the kaupapa of Ururangi and the winds.

Tauihu are the carved prows of waka and through complex visual language, they communicate whakapapa and stories. One of the more common design elements of many tauihu is the presence of two takarangi spirals symbolising the winds of Tāwhirimātea; these are placed on either side of a central human-like figure representing Tāne Mahuta during the separation of his parents Papatūānuku and Ranginui.

Tap on an image to view the slideshow

Understanding the wind has always been a fundamental aspect of life for Māori and it is through understanding and utilising the wind that we were originally able to make our way from the pacific to Aotearoa. Though these tauihu adorned smaller waka instead of the pacific navigating waka hourua of the past, they pay homage and acknowledge the importance of the winds in sailing and navigation.

Pūrerehua are a type of taonga pūoro and are sometimes used as a wind instrument. They are spun on a cord in a circular motion, usually above the head, producing a vibrational sound likened to the voices and winds of Tāwhirimātea.

Tap on an image to view the slideshow

There are many uses for the pūrerehua, including calling rain, communicating or enticing lizards and birds, and telling stories. These taonga are also utilised by those experiencing great grief, anger, or emotional turmoil. Through the playing of the pūrerehua, feelings or emotion built up within a person was released into the winds of Tāwhirimātea as part of a healing or recovery process.[ii]

Manu Tukutuku or manu aute are Māori kites and were seen as the connectors between the heavens and earth. They played many diverse roles within te ao Māori including practical and spiritual. Manu tukutuku were used to communicate over distance, predict the wind, or for divination and to find wrongdoers.[iii]

In addition to these functions, manu tukutuku were also flown for fun. Matariki was a time known for the flying of kites and competitions were once common among Māori. The use of kites for recreation also assisted built children’s understanding of the wind.

According to the research of Bob Maysmor, 17 named types of manu tukutuku were once flown by Māori. Today only 7 old examples have survived in museum collections. This one held in our collection is known as an upoko tangata, and is woven from raupō  and muka. It is an example of a rare taonga connected to the winds of Tāwhirimātea.

There are many taonga, stories, and influences of the wind in te ao Māori. As we come together and celebrate Matariki, and if you see Ururangi in the sky, consider the role of the winds of Tāwhirimātea in your life and reflect on its ability to guide, cleanse and heal.

I te puāwaitanga o te tahuna i te hau.
The raupō flower blossoms in the wind.