The story behind the Ko Rongowhakaata typeface

The typeface used in the exhibition Ko Rongowhakaata: The Story of Light and Shadow was developed in 2017. But its origins date back to the early 1800s, and is intimately connected to the iwi. Here is its story, told by Te Papa graphic designer Wol Jobson and Rongowhakaata’s Karl Johnstone.

Two of Rongowhakaata’s great carvers were Raharuhi Rukupō and Te Waaka Perohuka. Both were chiefs and tohunga whakairo (master carvers), and their creative spirit and innovation was an essential aspect of their leadership.

In the 1800s, Rukupō, Perohuka, and other carvers built the church at Manutūkē, and carved the renowned waka | canoe Te Toki-a-Tāpiri. Rukupō, alongside 18 other carvers, built and carved the meeting house Te Hau-ki-Tūranga, which you can see at Te Papa.

Te Hau-ki-Tūranga represents a high point of the great carving tradition of Tūranga – and of innovation. Rukupō, alongside 18 carvers, also embraced the potential of metal tools, creating a new and dynamic phase of Māori wood carving.

Rukupō could read and write, and saw how the written word could enrich customary knowledge keeping. He was the first to carve words, based on the Māori Bible typeface, into panels of wharenui | meeting house – the first Māori typographer. He also embedded the written word into carvings of ancestors.

Colenso made his first overland trip down the East Coast of the North Island, from Hicks Bay to Poverty Bay, in 1838. His main objective was to find a mission site, but he also established contact with East Coast Māori. He took his religious publications with him.

The typeface Colenso used in these religious publications was Caslon – probably Caslon Modern. This is the base for the Rongowhakaata typeface we developed for the exhibition.

Examples of Rukupō using type in his carving are in Te Hau-ki-Tūranga. Rukupō wasn’t random with these type forms – characters were consistent and patterns maintained.

Rukupō played with the widths of the type stems. With R, H, and P, the stems were thick. The N and O were often tilted. He saw each letter as a shape to be adopted and adapted.

Below are the developments of the typeface we created, referencing Rukupō and other Rongowhakaata artists’ type forms. The first is an open-face type. This was developed with a hand-chiselled, hand-crafted look.

Below are developments of the closed face type. 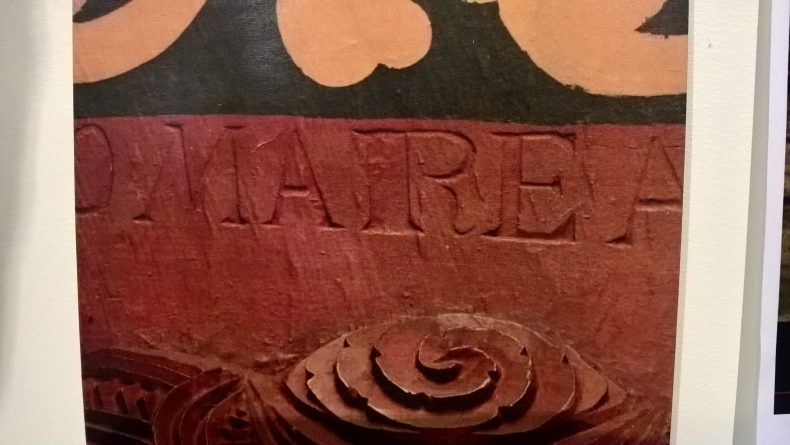 We then included elements of Te Hau-ki-Tūranga’s type.

The final font was rendered up in Adobe Illustrator and converted into a typeable font.

The font also forms the basis of the unique Rongowhakaata exhibition identity. It is used in upper level headings throughout the exhibition, anchoring the graphics – a symbolic and visual link to Rongowhakaata. 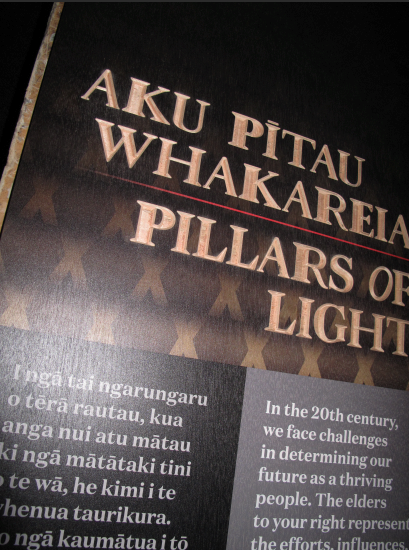 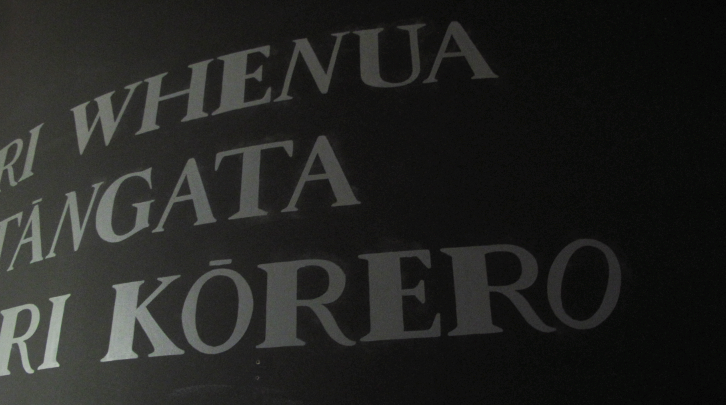 Background to the identity

The space in between

Light and shadow is ever present in all spaces – negative shapes are as essential as positive. When looking at nature – tree leaves, for example – the negative shape between the leaves and the sky is as important as the positive shapes of the leaves themselves. In a visual and cultural sense, this is the space in between.

The space in between is an important element, with plurality being a strong theme. There are many ways of looking at the same thing – the sky and the land, but the dimension in between is also essential to Rongowhakaata.

Alongside balance, organic shape and innovative design also have an important place within Rongowhakaata. This is evident with Rongowhakaata maihi, tukutuku panels, and carving.

Manu Aute are an important tradition for Rongowhakaata. They represent the movement between the realm of the gods and the world of light. They inhabit the space in between. 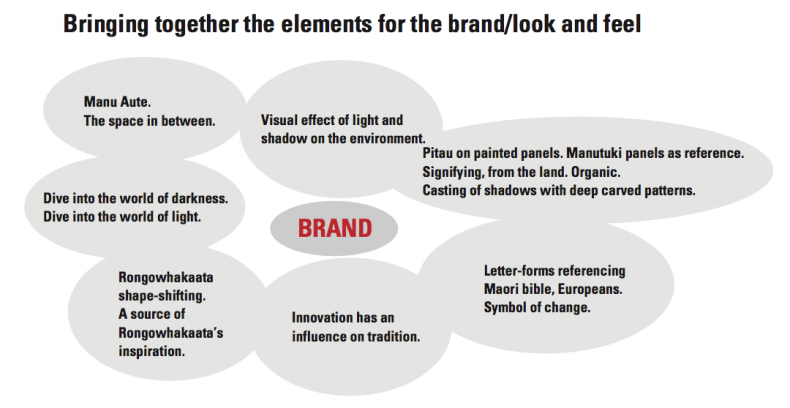 Manu, or birds, and their artistic parallel manu tukutuku, or kites, are important markers of the transmission of knowledge. Manu, with their capacities for flight and language, are symbols of the transcendent power of communication. Manu kōrero – orators – convey our histories, connections and knowledge in fine speech. Manu tukutuku are channels of knowledge between celestial and earthly realms, and expertise in kite-flying is a Rongowhakaata tradition.

Rongowhakaata himself was a kite expert and a shape shifter who could move between realms, changing from man to bird. Kites feature in our stories as agents of perception, protecting our tribal interests.

The design within the Manu Aute was developed by Johnny Moetara, a Rongowhakaata artist, and was subsequently developed with the support of the Te Papa design team. A play of light was added to the shape and also to the type to achieve the final result. 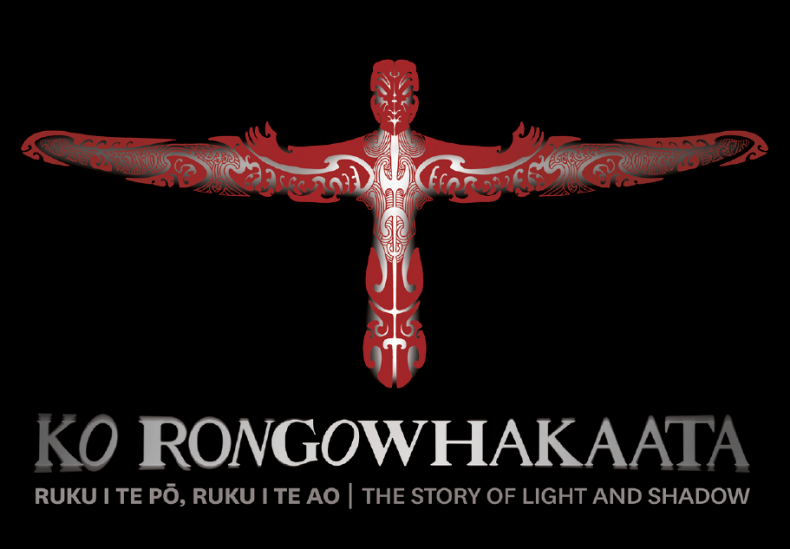