A rare sighting has been made by one of our hosts Perry Hyde, and the rest of the crew of the JOIDES Resolution.

While collecting hard-rock core samples from Brothers volcano in the Kermadec Arc, a ghost shark never before seen in this area, was caught on camera 1,200 metres under the surface.

Collecting from an underwater volcano

I’ve been lucky enough to have the opportunity to join crew and scientists aboard the JOIDES Resolution for two months as the New Zealand Education and Outreach Officer.

Our current expedition is a world-first. We’re collecting hard-rock core samples from an active submarine volcano. These samples will give scientists unprecedented insight into the hydrothermal systems hosted by volcanoes like Brothers.

Whenever we move to a new site, we send down a survey camera to ensure the target is appropriate for coring and that no sessile animals, such as long-necked barnacles, are living close-by.

The feed for the survey camera can be viewed via many screens around the ship, including the dining room.

Occasionally, we get a fleeting glance at a shrimp, or perhaps a flash from a (not-so-colossal) squid.

But earlier this week, as some of us were indulging in breakfast, something spectacular drifted into view.

In this sunken volcanic pit crater, at 1,200 metres depth, we spied an angelic ghost shark (Hydrolagus) blissfully cruising about in the deep.

This beautiful creature seemed to be curious of our survey camera, and returned many times to the field-of-view.

Hydrolagus are members of the order Chimaeriformes, a group largely confined to deeper waters.

Their closest living relatives of this isolated order are sharks and rays, although their last common ancestor with them was nearly 400 million years ago – long before the dinosaurs.

Do you know what species this ghost shark this is?

It’s possibly the purple ghost shark (a.k.a. pointy-nosed blue chimaera), Hydrolagus trolli. But we don’t have any records of that species from the Kermadec Arc.

What out of the ordinary things are known about ghost sharks?

They swim more like a skate than a shark – flapping their huge pectoral fins like a bird.

The volume of muscle involved in generating the flapping is greater than in a dogfish.

The tail has no function in swimming, and the pelvic fins probably generate lift and allow turning, like the flaps on an aircraft.

Are they really sharks?

Ghost sharks and their relatives were an evolutionary side-line from the lineage that gave us sharks and rays.

They have a number of traditional ‘sharky’ features such as the males having claspers and a skeleton made of cartilage but they have notable differences such as only a single gill opening each side, (in most cases) lacking a forked tail and the teeth are fused into a parrot-like beak.

Their heyday was back in the about the Devonian to the Jurassic, with 15 families in the fossil record. Most became extinct during the Permian.

Today there are only three families, but the number of species has been increasing with greater sampling to over 50, most in the family Chimaeridae.

Are they a common species in New Zealand waters?

This appears to be the first record of the group from the Kermadec Ridges system, but given its distribution up the Lord Howe, Norfolk, and Three Kings Ridges, it doesn’t come as a huge surprise! It would be great to get voucher specimens though to confirm the identification.

It’s pitch black down at the volcano – can these creatures see?

They have very large eyes, but the majority are living well below the limits that sunlight can penetrate. In that case they would be tuned into bioluminescence at about 450 nm wavelength. Their heads are also covered with well-developed system of sensory pits and canals that would pick up on the slightest vibrations. The snouts have what appear to be Ampulla of Lorinzini which would suggest electroreception.

What isn’t known about them that you’d like to know?

What species are there and how far up the ridges do they extend?

How long do they live?

How old are they when they start reproducing?

How many young are produced over the lifetime of a female?

You can hear more from Perry in our new lunchtime talk series, Science for Lunch, where Perry will be live-streaming in from the JOIDES Resolution on Wed May 30, Jun 13 and Jun 27, 12.15pm–1.30pm.

Further information on the expedition 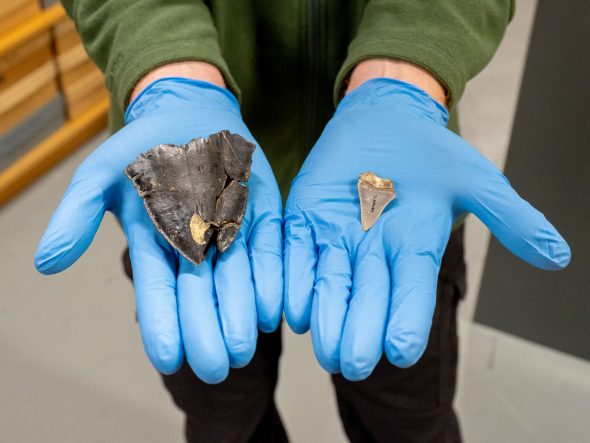