Conservator Linda Waters, and her colleague Tijana Cvetkovic, have been helping Bronwyn Holloway-Smith of the Mural Search and Recovery Project investigate whether a 1960s mural by Mervyn E Taylor called  ‘First Kumara Planting’ ’ is still intact, hidden under white paint in the old Soil Bureau building in Taita. 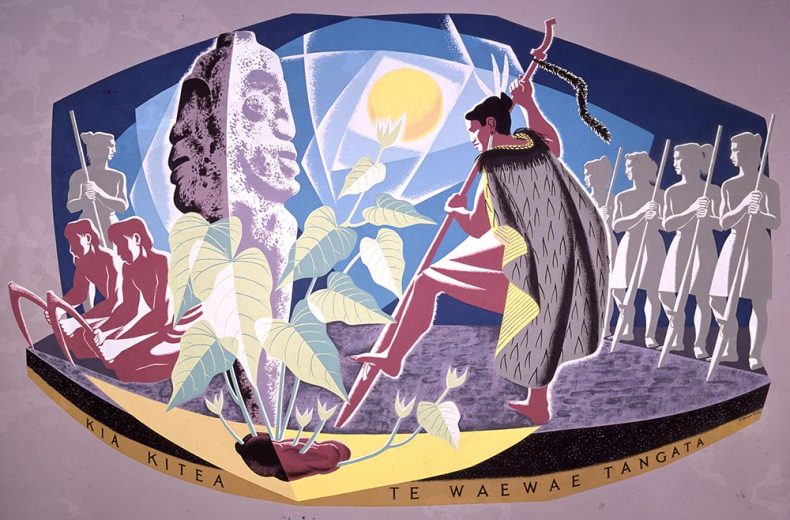 The story so far

In my previous post I described how we used infra-red technology to attempt to see through the paint over the mural on site.

It soon became clear this wouldn’t be possible due to the nature of the artist’s paint and the house-paint over the mural.

So we then decided to take a tiny sample from the wall to put under the microscope to see if this technique yielded more results in seeing paint from the original mural. This proved a success!

We now wanted to get an indication of whether the mural was there in its entirety so we went back for a second visit and took samples from elsewhere on the wall.

We had suggested that Bronwyn map out where the edges of the mural were expected to be using an old photograph as a reference. She had done this, so we could then aim, albeit approximately, for particular areas to sample.

We took one from the extreme left, and one from each of the top and the bottom. Our initial sample taken on the first visit had come from the right side, so there was no need to take another from there.

Here are the results, with which we’re very happy, as it means the mural is likely there, complete, on the wall…you can see, under the two layers of white paint, blue, yellow and red paint artist’s paint from the different areas.

This strong blue is from the top of the mural.

There is bright yellow at the bottom, which may have line work on top of it related to the foliage seen in that area.

The red ‘ochre’ (descriptive of the colour, not ochre per se) is from the two figures and their implements on the left of the mural.

Unfortunately the mural cannot be easily uncovered, either chemically with solvents or mechanically with scalpels.

Essentially this is due to the nature of the materials and the uneven concrete substrate.

The artist’s paint layer is very thin compared to the layers above it, and it sits on a rather textured, sort of pitted, concrete substrate;  because of this mechanical removal would result in damage to the original paint and a very unsatisfactory incomplete or uneven finish.

Listen to Bronwyn Holloway Smith, my fellow painting conservator Tijana Cvetkovic, and I, talk about our second visit to Taita in a radio interview by Lynne Freeman on RNZ