What will make people want to look at a photo in 100 years time? Which ones will people be interested in? These were questions we posed to visitors of the exhibition New Zealand Photography Collected that was recently shown as part of Ngā Toi | Arts Te Papa on level 5 at Te Papa.

“Do you have a photo that people will want to see in 100 years?
Share it on Instagram with #tepapaphoto
In your caption, tell us why you think it will last the distance.”

We noted that museum collections are acquired with the very long term in mind and that photographs worth keeping might show something rare or unrepeatable; capture a historic moment; or express something about ourselves.

Visitors posted 803 photographs on Instagram in response to our invitation, and every fortnight we picked out ten or so of these to feature on a video screen in Ngā Toi. In this blog I select ten of my overall favourites. 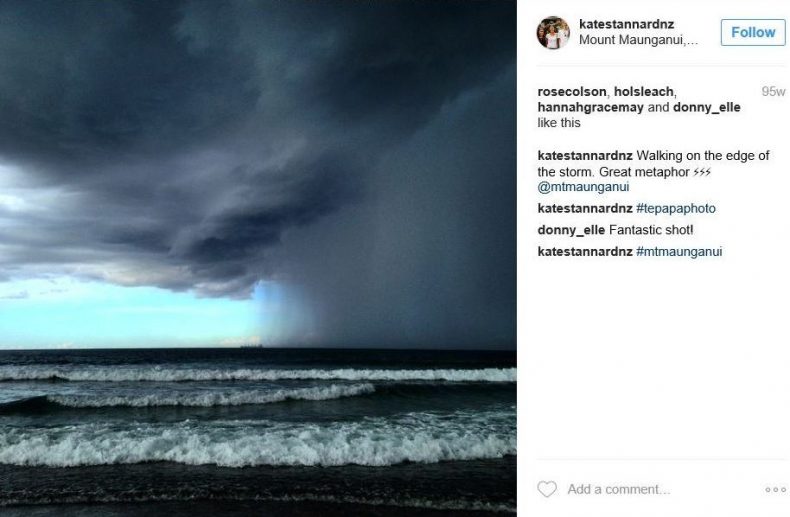 Many dramatic or spectacular landscape images were submitted. A very large number were of sunsets or sunrises. I like the photograph above for being a bit different, including its almost monochromatic nature, its division of the scene into three blocks of tone and detail (four if you count the clear sky) and for the way the heavens seem to literally fall to earth. 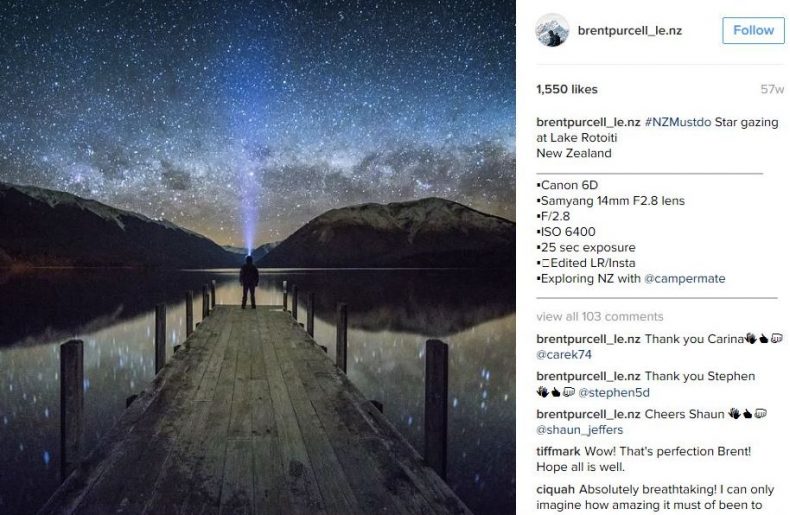 There were also a sizeable number of photographs of stars at night. The way their blurred reflections are seen in the water adds something here, as does the light beaming up from in front of the figure – presumably from their headlamp.

As in the night sky photograph, the landscape was enlivened with people in some cases. Their presence here keys the image, telling us how steep and high the terrain is in a breath taking way. At the same time, it may tell viewers in 100 years something about the sort of crazy sports people got up to in the 2010s.

Visual ambiguity is something I’m always a sucker for and featured in a number of images. This moss-covered arch of a bridge looks watery and glowing. Its lack of features make perceiving depth difficult, and its shape and size puzzling. 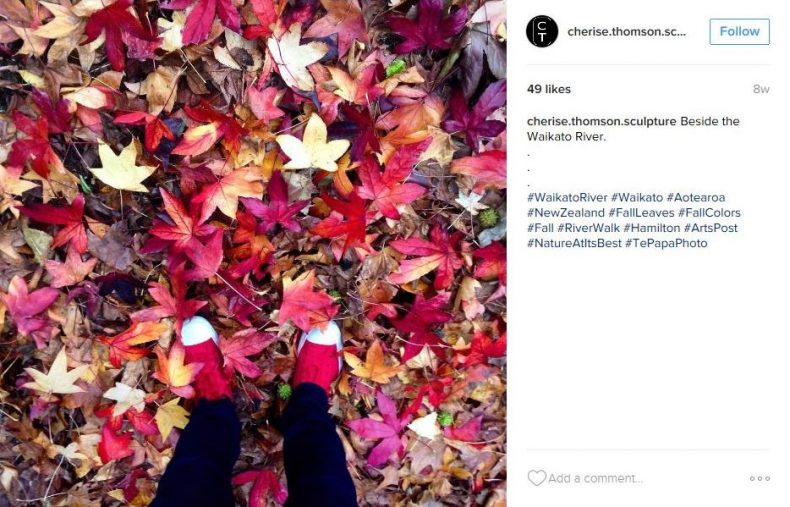 Here is another disorienting photograph. The way the leaves are larger at the top than the bottom disrupts our usual expectation that the more distant (and hence smaller) things are in the upper part of a picture. The red shoes nicely match the leaves and there are small green fruits in amongst the red if you look closely. But it’s the sense of the top of the photograph leaning out, and the giddy way the legs fall back that gets me.

And now we get a different sort of ambiguity. What appear to be rusty trailer couplings look halfway animate. They remind me of cows’ heads, or something out of a dystopian sci-fi, where robot heads have been abandoned to rust and decay – maybe something we need to see 100 years ahead of time, not 100 years later! 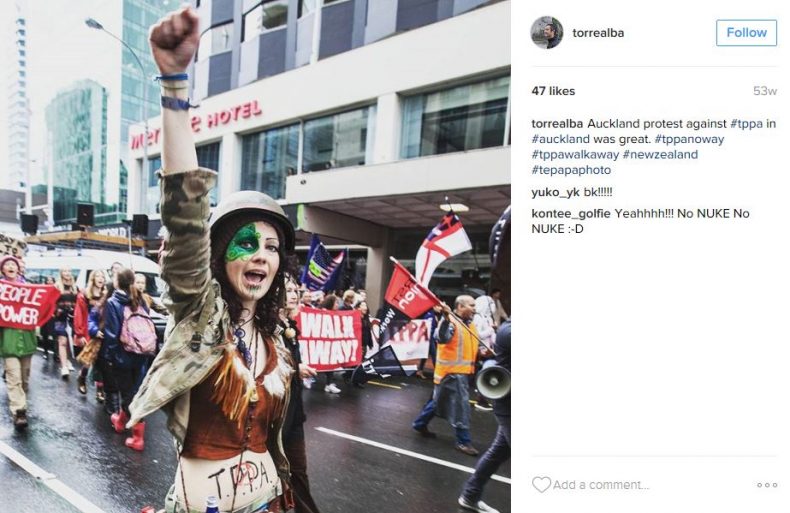 This photograph and the two following are very definitely about our time and place today. One hundred years in the future they will tell us what people were doing now: what the issues were and how people responded to them in the TPPA protest. And, below, everyday activities as commonplace as going to the supermarket or playing with a sprinkler in the backyard. 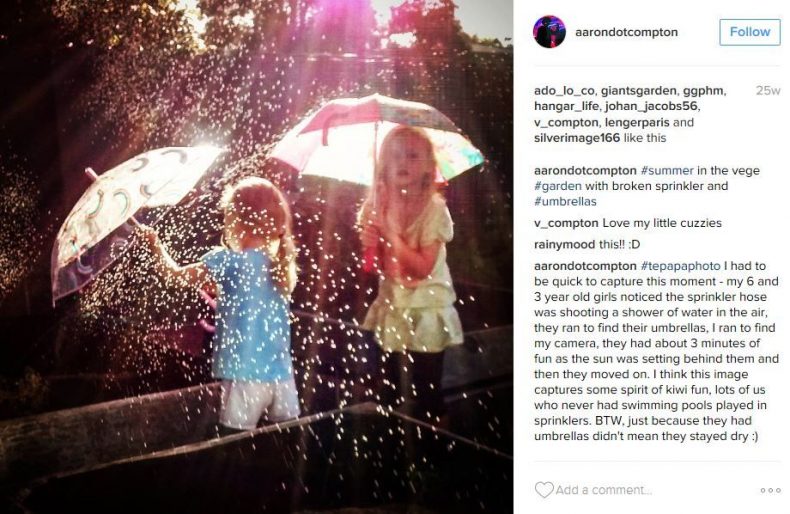 Lastly, one photograph that catches my attention is not exactly the most attractive image, but it is very intriguing. It is of a man standing at a beach pointing into the sky for some reason, with a large blazing sun behind him. Except it is not. If you visited New Zealand Photography Collected you will know that he is standing before a 1960 photograph in the exhibition by Brian Brake of Oriental Bay, Wellington. And according to the Instagram caption he is pointing to a place where he used to live. With this information you can see that the shadow of his arm lies across the photograph and the ‘sun’ in the sky is larger than life and is easily explained as glare from an exhibition light on the print. But even so, there is something uncanny about the image. With contextual clues around the scene cropped out, the man feels halfway in the Brake photograph and halfway out. Photographs freeze a moment in time, but this man seems to have broken that spell. 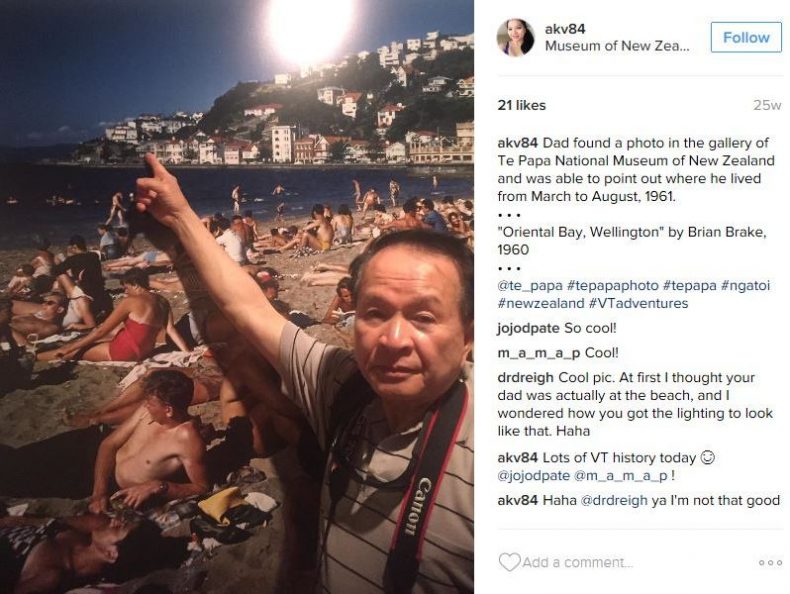 Now, you might ask what makes some of these photographs the sort that people will want to see in 100 years. Certainly it was rare that the submitters provided a caption to explain this. More often it seemed these were photographs people thought worth sharing now – the logic perhaps being that they were cool shots, and people in the future might therefore also be interested in seeing them. But there didn’t seem to be much sense of history, except for the last few images above. Of course it is difficult to think of our own lives as history while we are living them. It can take something like the time-freezing effect of a photograph for us to understand that. So the value of preserving old photographs is that they remind us of this. And, crucially, they show what the past looked like, even if they were not intended to operate that way at the time.

However, what is often missing from historical photography is images of everyday life – of people at work in the office, eating breakfast, going shopping. Photography has tended to be used for special occasions. Some argue that the mobile phone is changing this, for we are reaching the point where everyone has a camera with them all the time. But I’m not convinced, for I think we will still use the camera in socially defined and ritualistic ways, including special family occasions, selfies and even the pursuit of the ‘great shot’. The submissions to this project, though certainly striking images at their best, tend to confirm that few of us are recorders of what might be of greatest interest in 100 years time: the everyday life of the present.