Spending time at the Evergreen

Kia ora and welcome to my final reflections on my time working on the Remembering the Evergreen project at Te Papa.

I have to admit the title of this post is a flight of fancy. I am unfortunately too young to have ever visited the Evergreen Coffee Lounge (I was about nine years old when the Evergreen closed). But while researching I found myself imagining sitting in the café, and especially tasting those famous toasted sandwiches!

At the beginning of the project it was difficult to grasp what the café looked like. We knew that the collages originally hung inside the café, but initial archival and web searches found no images of either the exterior or interior. The only visual source I could find was a short video featuring the café’s interior in a 1989 documentary called The Night Workers.  One other image was a portrait by New Zealand art photographer Fiona Clark. It features the cafe’s owner Chrissy Witoko seated in her upstairs apartment above the Evergreen.

The collages became the focus for my research and enabled me to explore the surrounding contexts, people, places. 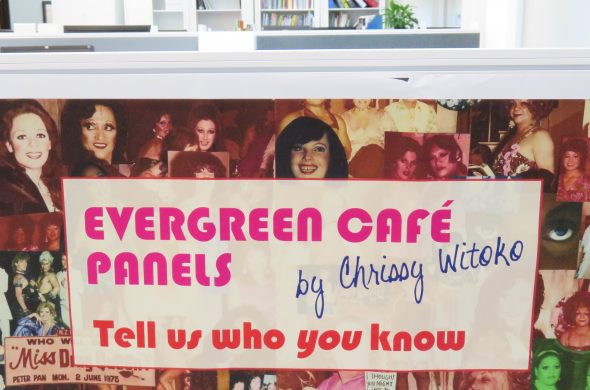 I didn’t work directly with the original collection objects, but instead used enlarged printed copies of the collages in order to preserve the originals. When I took a trip to the history collection store and saw the collages in person – their size, their fragility and detail – I could visualise them hanging on the walls of the café.

More importantly, upon closer inspection, one of the collages actually included photographs taken inside the Evergreen, showcasing the collages as they originally hung on the walls in the background. Seeing the collages in person revealed glimpses of the café’s interior décor, and showed the original in situ representation of the collection.

Look closely, this image of one collage includes photos of the interior of the Evergreen Coffee Lounge, circa 2001, Wellington, by Chrissy Witoko. Gift of the Witoko family in memory of Chrissy Witoko, 2012. Te Papa (GH015976)

Focus groups with Chrissy’s friends identified many of the people in the collages and helped us record some of the stories associated with the people, places and events depicted in the collages. The workshops were recorded and then transcribed for Te Papa’s internal research use. We used sticky labels to note the names of individuals and groups on photocopies of the collages. These were then photographed, and uploaded to Te Papa’s database for future reference.

Our workshop sessions revealed information on other Wellington (and Auckland) nightspots popular between 1960 – 2000. Combined with archival research using the Wises business directory and Universal Business Directory (UBD), I was able to assemble a more detailed timeline of the various nightclubs, strip clubs, late night coffee bars and hotel taverns referenced in the Evergreen collage panels. You can find information on Wellington’s late night entertainment establishments here.

While working on this project, I discovered that the Evergreen was many things to different people. The Evergreen’s history spanned the passing of the Homosexual Law Reform Act, and was in fact a key place in which all people could debate contemporary issues in a safe, accepting environment. But it was also family space, the source of fond childhood memories, and a physical home away from home for many of Wellington’s LGBTI community.

As I end my placement I am left with my own memories, some wonderful work experiences and a wish to have met the generous and indomitable Chrissy Witoko.