Connecting Past and Present

This photograph below was lost the moment it was taken in 1929 or 1930. Mary Sporle, known as Dolly, proudly showed off her son Leslie for the camera at Wellington’s Berry & Co. studio with the intention of giving his grandparents a photograph of him. But her family believes she never returned to order prints, perhaps because the Depression was beginning and she didn’t have enough money to pay for them.

Four shots were taken in the sitting, and though clearly this one was a failure in capturing a good likeness of Leslie, the studio kept it, along with the others. The Sporles moved to Feilding a couple of years later, and the studio ceased trading under the Berry name. A succession of other photographers used the same space up until the early 1950s, and they may have taken on the collection of negatives in the hope of earning sales of prints from previous customers. But eventually the building, constructed in 1900 for William Berry specifically as a photography studio, was turned to other purposes, and the cameras, backdrops, and negatives were long gone. Or so it seemed, for in the 1990s, when the top floor was being renovated, a stash of glass negatives was found in an attic space and sold to Te Papa.

When they were scanned some years later I was immediately attracted to the image of the blurry toddler. Despite being a dud by any standard of studio photography, it wonderfully captured childhood joy and exuberance, along with maternal pride. I eventually chose it for my book New Zealand Photography Collected and the associated exhibition at Te Papa. Then by chance one of Dolly’s granddaughters was looking through the exhibition and had a shock of recognition seeing her grandmother blown up life-size. Checking with other members of the Sporle family confirmed her impression that it was Dolly. What’s more, the energetic toddler, now 87, was still going strong, and he paid a visit to see the photograph on show last week.

As it happens, the building where the photograph was taken is also well preserved. It is a rare example of a photography studio from the era of natural light photography still in existence. You can see it at 147 Cuba St. In the front rooms on the first floor is the Peter McLeavey Gallery, occupying what were previously reception and dressing rooms of the studio. At the back is Enjoy Gallery, and this is the former main studio (there was a smaller one on the second floor). You can still see the large bank of floor-to-ceiling glass windows that face south to avoid direct sunlight and which provided the lighting for each pose. On the front of the building, at the very top, the words ‘Berry & Co. Photographers’ are still visible. (For more on the Berry studio see Te Papa’s book Berry Boys.) 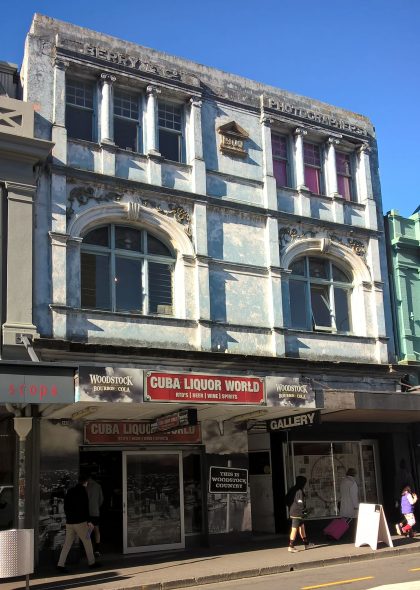 A photograph taken more than 80 years ago still finds connections with the present – not only to where it was taken, but also to one of its subjects, Les Sporle. For the first time, he has been able to return to a long forgotten moment in his own life – one erased from his young memory soon after he unintentionally erased his face from the photograph.