Brothers and sisters: The scale of our war

Through military nursing, a group of more than 500 New Zealand women participated directly in the Great War, including Lottie (Charlotte) Le Gallais, who is our seventh larger-than-life figure in Gallipoli: The scale of our war (above). This blog is about her war and the impact it had on the Le Gallais family.

Lottie was on the nursing staff (above) of Auckland Public Hospital when war broke out, and was one of 79 in the second contingent of New Zealand nurses chosen, in June 1915, to serve overseas. From this group of 79, Lottie was selected to work on the hospital ship Maheno, which would transport sick and wounded soldiers to hospitals away from Anzac Cove.

The Maheno left Wellington on 11 July 1915 (above). Many on board the Maheno signed this linen cloth (below) during the voyage. The nurses embroidered the names in red, and the cloth was sent back home to be sold to raise funds for the war effort.

When the Maheno arrived in Egypt in August, Lottie contacted her sweetheart, Charles ‘Sonnie’ Gardner and described the effects of the fighting on Gallipoli:

‘It was terrible to see the wounded, they all say Gallipoli is hell and death…from what we can hear, the losses are awful’ (23 August 1915).

For three months, Lottie endured ‘terrible clean ups’ on the Maheno as the ship shuttled sick and wounded men between Gallipoli and hospitals on Lemnos island and in Egypt, Malta, and England.

Two brothers and a sister

Like many others, more than one member from Lottie’s family volunteered for military service. Lottie’s brother Leddie departed in April 1915, and Owen left later that year. The third Le Gallais brother, Kenneth, was keen to join up, but Owen discouraged him.

Before landing on Gallipoli in June, Leddie’s troopship anchored off the island of Lemnos, where he composed a final letter to his family:

Leddie was killed in action on 23 July 1915 – a month before Lottie arrived in Egypt, where she thought she might meet up with him. His father found out about his son’s death on 4 August. Lottie didn’t know until November, when her unopened letters to Leddie were returned to her, one of them stamped ‘KILLED RETURN TO SENDER’ (below)

At the end of November 1915, the Maheno carried invalided troops and a bereft Lottie back to New Zealand. After arriving home on 1 January 1916, Lottie worked again at Auckland Public Hospital and cared for her ailing father.

Her sweetheart ‘Sonnie’ was conscripted at the end of 1917 and, despite an appeal went into Featherston Military Training Camp six months later. Married by now, to Sonnie, Lottie had a final stint of military nursing at the camp’s hospital (below) during the 1918 ‘flu pandemic. 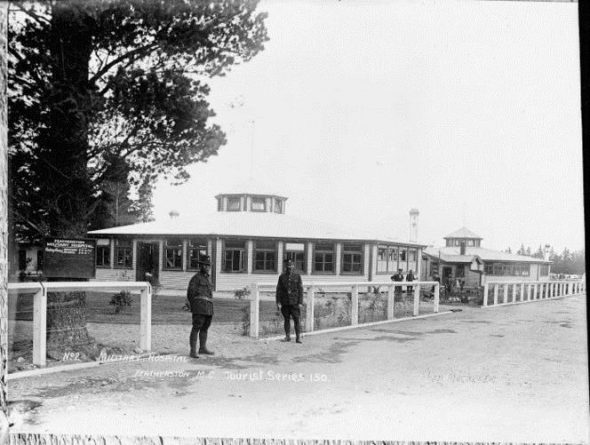 After the war, Lottie supported her local Returned Soldiers’ Association (RSA). She was also involved with the Auckland Ex-servicewomen’s Association, which sold poppies for Anzac Day. Material related to her military nursing is held in the library at the Auckland War Memorial Museum.