Cook Islanders at War: From Rarotonga to Belgium 1917

This blog is dedicated to one of the more than 450 Cook Islanders who enlisted in WW1 and one of the earliest Cook Island soldiers killed in action far from his Ipukaraea, his homeland.

In the early 1900’s Kiro Luke ADAM sailed from Rarotonga, Cook Islands to work as a gardener in Parnell, Auckland for a Mr H.E. Bloomfield. He enlisted to go to war on the 1st July 1915 and his declared age at that time was 21 years old. He joined A Company, 2nd Maori Contingent, that was later renamed the New Zealand Maori (Pioneer) Battalion, New Zealand Expeditionary Force. This company departed New Zealand on the 19 September 1915 on the ship, Waitemata for Suez. In his military record it appears that Kiro was attached to the Auckland Infantry Battalion on 18 Jan 1916. Later that year on 8 August 1916 Private Kiro was appointed a Battalion Bomber – a specialist in hand grenade throwing, (grenades were called bombs at that time).

He was likely to be serving with the Pioneers at Passchendaele in Belgium the following October and sadly he was killed in action there on 7 October 1917. The Battle of Broodseinde was fought as part of the Passchendaele Campaign on the 4th October 1917 by the New Zealanders who took Graventafel and opened up the way to Passchendaele.

View ‘Slide show of transport on the battlefield‘, (Ministry for Culture and Heritage), updated 14-Oct-2014.

The autumn of 1917 had been the wettest in Belgium for 70 years and the flat landscape around Passchendaele was a sea of mud. As soon as the roads were destroyed by heavy rain and artillery, the Maori (Pioneer) Battalion were there ready to rebuild and laying down fascines or logs of wood to provide a steady road surface. Maori pulled many guns and horses out of the boggy ground.

The New Zealanders and others gained a kilometre in territory at Graventafel which was a huge success in world war one terms and took a thousand prisoners. They lost 320 lives however, including Dave Gallaher, the captain of the 1905 original All Blacks. Between 4 and 13 October over 2600 men on stretchers were moved from the front line. It took stretcher-bearers three days to clear the field of wounded after the opening salvo of Passchendaele at Gravenstafel on 4 October and maybe it was there that Kiro was one of the wounded waiting to be attended to. 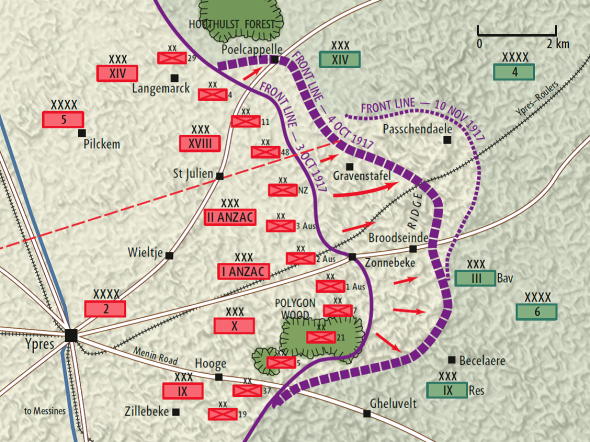 Sean Brosnahan Curator at Otago Museum, writes that,
“On 7 October 1917 Kiro Adam would no doubt have been slogging his guts out in the rain and mud trying to build the roading system that was essential for the coming attack.  The Germans continually bombed these roading parties and they took heavy casualties.  Every time a piece of road was blown to smithereens, the Maoris would pick themselves up and start again.  It was arduous, soul destroying work and they were famous for the way they did it.”

In May 2015 New Zealanders Sue and Colin Brown from Levin were going to the Western Front on a special trip to find the graves of New Zealand soldiers’ and lay on them a handspun silk poppy made by the ladies of Levin. Myself and Sara Guthrie from Te Papa met them both when we travelled to Levin in May this year to collect a new acquisition. Sue and Colin told us they were going to cycle to the various cemeteries in Brussels and find any New Zealanders’ graves and would place beside the headstones one of the special poppies and take a photo. They promised me to find Private Adam’s grave and place a poppy beside it. They did and Sue wrote “Colin and I biked to Ypres today to visit Kiro Adam’s grave. It was a very moving place, and I left my last handspun silk poppy on his grave. New Irish Farm was particularly moving for us, both because Kiro was so far from home and because at least half of the graves seemed to be for men whose identity was not known. Those graves had the inscription “Known unto God”. The grave yard is close to Ypres (Ieper to the Belgians) and the city is moving closer but the cemetery is peaceful and Kiro’s grave is in the first row and under a tree. I hope these pictures give you some idea. I had been putting the poppies that the ladies of Levin had made on New Zealander’s graves but at this cemetery I just put them on the graves around Kiro’s because so many were unknown and some of them could have been New Zealanders.”

Meitaki ma’ata (Thank you) Sue and Colin Brown for these beautiful photos of one of the Cook Islands men killed in action in WW1 as we approach the anniversary of his death and so far from his Ipukarea (his homeland). Te Atua te aroa. We will remember them.