‘Dante Gabriel Rossetti. Even the name is extravagant, evoking Italy’s greatest poet and the angel of the Annunciation. It well suited Rossetti, for he was an extravagant man – in his art, in his poetry and in his emotions. Brilliant, witty, generous and loyal, he was irresistible to friends and to lovers’. So writes Rossetti specialist Alicia Craig Faxon, and in my past experience as a university teacher, I can confirm she is on the money. Not a few of my (predominantly female) students obviously fell in love with Dante Gabriel and his art in the course of writing their 3000-word essays. Who was I to discourage them?

Te Papa possesses just one work by Rossetti. It isn’t a major one by any stretch of the imagination, and would probably appeal to relatively few of the necessarily wealthy collectors who eagerly pursue his drawings and paintings. It doesn’t depict their priority, the signature Rossettian femme fatale. It isn’t even particularly beautiful. But it has considerable historical significance, a power and an integrity when we look at it and learn the story that it tells…

Rossetti, Morris & Co
The Te Papa Rossetti is a fairly large drawing (797 x 478 mm) depicting the Biblical episode of The Visitation, in ‘used’ condition, with scrawling on it. The last thing Rossetti envisaged when he drew it was for it to be cherished as an art work, the proud property of an aesthetic connoisseur, or even something that a museum would be proud to own. It was, literally, a working drawing, a cartoon for a church stained-glass window. Rossetti produced 36 such cartoons between 1861 and 1864 for the newly- founded art firm of Morris, Marshall, Faulkner (MMF) & Co, later better known as Morris & Co. This places it at the epicentre of 19th century design and one of the earliest exemplars of the Arts and Crafts Movement which, through Morris himself, Liberty, Sanderson and, yes, in recent years Laura Ashley, has made our lives and lifestyles more beautiful and meaningful. Its cultural inheritance is thus considerable. But what did it mean at the time it was made?

Jolly japes
MMF & Co came about almost by accident, in the course of the fun and games, poetical, musical, medieval and thoroughly jovial times enjoyed by William ‘Topsy’ Morris and his talented, arty array of friends, who included Edward ‘Ned’ Burne-Jones, Philip Webb, Ford Madox Brown and of course Rossetti, at the newly-wedded Topsy and Janey’s brand new residence, Red House, Bexleyheath, which today is in outer London.

How should Red House be furnished without looking horribly vulgar and nouveau riche? How could it embody the budding artistic creativity of Morris and his merry company? According to Rossetti, as mulled wine doubtless flowed, ‘we got talking about the way in which artists did all kinds of things in olden times, designed every kind of decoration… and someone suggested, as a joke more than anything else – that we could each put down five pounds and form a company.’ The rest is art history.

The glory of God
MMF & Co was an overnight sensation, winning two medals for its products at the huge South Kensington International Exhibition of 1862 and soon having commissions coming out of its ears. In its prospectus, the Firm offered to ‘design and execute wall paintings and decoration… metalwork and jewelry, carving, embroidery and furniture’ for houses and churches ‘at the smallest possible expense’. To this list, add stained glass. We godless and materialist New Zealanders underestimate at our peril the intense devoutness of this era in history. Churches (almost all of them Gothic Revival) were being erected in greater numbers than at any time in the past. They obviously needed to glorify God with beauty and dignity. At this still young stage in their lives Morris, Rossetti and Burne-Jones would not have admitted to any disbelief in God, and they would never fail to serve believers through their creations. Both Morris and Burne-Jones had originally intended to become clergymen before finding a new article of faith in art, while Rossetti’s sisters, Christina and Maria Francesca, were both intensely devout High Anglicans. Rossetti had behind him his iconic Ecce Ancilla Domini (The Annunciation), and was from 1858 to 1864 engaged in painting a lavish altarpiece for Llandaff Cathedral in Wales. Therefore a stained glass window design on the lines of Te Papa’s Visitation was meat and drink for him.

The iconography of The Visitation
The Visitation is part of the cycle of scenes in the life of the Virgin, and is frequently depicted in art. Just after the Annunciation, Mary and her cousin Elizabeth meet at the latter’s house (Luke 1:36-56). The visit is one of mutual rejoicing: Mary had recently conceived, while the considerably older Elizabeth was six months’ pregnant with John the Baptist following a lifetime of barrenness. The scene usually takes place outside the house of Zacharias, Elizabeth’s husband, who is often present, as is Joseph, the husband of Mary. Rossetti’s depiction ticks all these boxes. But what he adds, in a self-consciously archaic way that echoes depictions of the theme in early Christian art, is to represent Christ’s Incarnation in Mary’s womb, and John the Baptist’s in Elizabeth’s. This takes the form of tiny, medallion like effigies of the respective babies, hanging over the drapery covering the expectant mothers’ bellies. This visual symbolism had died out thanks to disapproving, puritanical churchmen in the 15th century and we do not even see it in Giotto’s famous rendering of the subject. By reviving it, Rossetti is being ‘Pre-Raphaelite’, i.e. working in the spirit of art before Raphael, in the most powerful and literal way.

The power of The Visitation
If we are to be brutal about Rossetti’s works in the twenty years of his career following The Visitation, we would risk calling his art repetitive, obsessive and unhealthily concerned with the depiction of powerfully beautiful and sometimes sinister women. It still strikes some critics as affected. This accusation could never be made of the preparatory drawing of The Visitation. 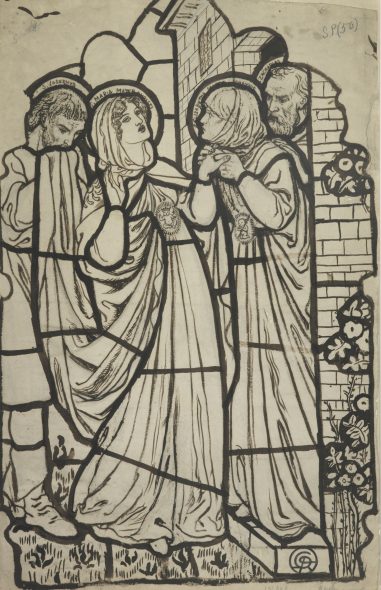 While the facial features of the Virgin Mary are beautiful (somewhat evocative of Janey Morris, indeed), telling the holy story, simply, directly and powerfully to congregations that were not necessarily literate was Rossetti’s main aim. There is a directness, even vivacity, in the compositional narrative, and nobody can mistake the theme. The tender embrace and the intense gaze of Elizabeth towards Mary are convincingly conveyed. Zachiarias and Joseph, labelled in their haloes, look on dutifully. Rossetti risked looking awkward, and ‘unbeautiful’ in his figures’ depiction; but the meaning was much more important here than aesthetic sensibilities. I don’t think it’s fanciful to imagine that such a drawing would have appealed for precisely these reasons to our own Colin McCahon a century later. He would have also liked the way ‘SP 50’ (or possibly ‘56’) has been scrawled on it at top right. ‘SP’ stands for ‘Subject Portfolio’ and was inscribed on stained-glass cartoons by the Firm for unmounted storage in portfolios until the cartoons were sold in the early twentieth century. ‘SP 50’ thus says what it is, and is part of the drawing’s integrity.

Visiting the The Visitation
Rossetti’s cartoon, translated into the actual stained glass, can be found among the MMF & Co fabric at All Saints’ Church, Selsley, Gloucestershire, whose architect was Morris’s friend, the leading Gothic Revivalist George Frederick Bodley. For an image of this go to Flickr

Other windows in the same church include designs by Philip Webb (The Creation) and Morris himself (The Annunciation). All Saints’ awaits my own eager visitation. Although we are celebrating Rossetti here, Morris himself must take much of the credit for the final product. It was he who consulted the patron and the architect, he who distributed parts of the job to the artists, he who vetted the cartoons (probably drawing the heavy lead lines over Rossetti’s figures), he who selected the ‘pot metal’ glass and its colours, and he who supervised the windows’ installation. Later Morris ecclesiastical stained glass possesses a majestic fluidity and sophistication. But does it impact on our hearts, minds and lives in quite the same way as the drawing (or window) of The Visitation?