Len Lye: under the sea and in New Plymouth

This is a momentous week for modern art in New Zealand – on Saturday, the Len Lye Centre at the Govett-Brewster Art Gallery in New Plymouth will open to the public, the first ever space in New Zealand dedicated to a single artist. To toast this exciting occasion, it seems like a good opportunity to take a look at Lye’s Untitled (Life under the sea), the only painting of his in Te Papa’s collection.

In this wonderful work, strange biomorphic shapes float languidly against a nebulous green background. It is almost as if you are peering through a microscope at the tiny organisms in a sample of seawater. Yet these aren’t your average specimens from science class – Lye has given these protozoean creatures a whimsical (dare I say even Dr Seuss-like?) character that makes them appear fantastic and a bit festive.

Lye painted this work around 1930, a few years after leaving New Zealand for London. During this time, he was loosely associated with the British surrealist movement, which culminated in his participation in the London International Surrealist Exhibition of 1936 alongside artists like Marcel Duchamp, Salvador Dalí, René Magritte and Max Ernst. You can see some of those surrealist influences in Untitled (Life under the sea), in which the evolution of organic life acts as a metaphor for unleashing creative processes from the unconscious mind. This work shows a particularly strong link to the biomorphic forms in the paintings of Spanish surrealist artist Joan Miró, whom Lye admired and later befriended. Both artists took a somewhat painterly approach to surrealist forms, sharing an interest in ‘primal’ images ruled by primordial organisms 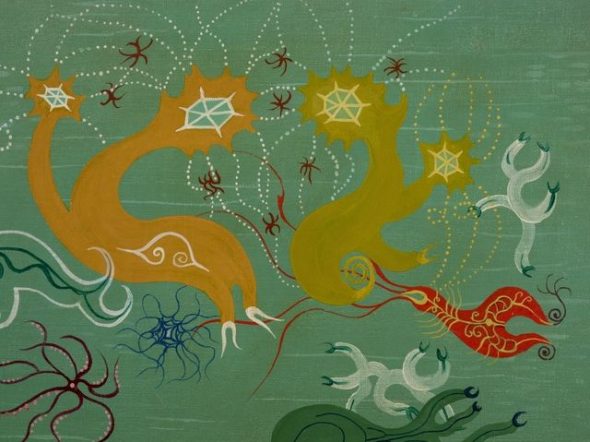 Unlike Miró, however, Lye was not best known for his painting. Rather, it was his radical experiments in avant-garde film making and kinetic sculpture that earned Lye his place as an important figure of modernism. Untitled (Life under the sea) links strongly with one of his most famous works, his ambitious animated film Tusalava of 1929. In this film, amoebic creatures pulsate, wriggle, dilate, bloat and replicate as they evolve from simple cellular organisms into complex humanoid forms. Untitled (Life under the sea), made around the same time as Tusalava, seems almost like it could be a colour still from the film. However, ‘still’ doesn’t seem like quite the right word, as Lye captures a distinct sense of movement in the painting. You get the impression that the creatures are alive – floating, gliding and spinning around each other like dancers in a primordial soup. This interest in movement is one of the most defining characteristics of Lye’s oeuvre, connecting Untitled (Life under the sea) with everything from his film-making to his kinetic sculptures.

This is one of the only major Len Lye paintings known to exist outside the Govett-Brewster collection. It was originally owned by painter John Aldridge, a British artist who collaborated with Lye on an unfinished surrealist film in the early 1930s, and it was purchased by Te Papa in 2003. So to see more by this remarkable artist, you will simply have to head to New Plymouth to check out the new Len Lye Centre and enjoy their extensive collection of his work.

A hearty congratulations to our wonderful colleagues at the Govett-Brewster Art Gallery, for all their hard work preparing for the opening of the new Len Lye Centre! If you’d like to join in the celebrations with them, they have a full weekend of events planned around Lye and his work from July 25th-26th.