In June last year we began making high-resolution images available for download, for collection items where copyright (or cultural rights) would allow us. We went live with 14,000 images under a Creative Commons licence, and 17,000 under No Known Copyright Restrictions statement. You can find out a bit more about what those statements mean on the blog from the launch.

We’re releasing more and more as we can, as we digitise more, acquire more, or clarify copyright for others. We’re now up to over 20,000 under Creative Commons BY-NC-ND, and over 25,000 under No Known Copyright Restrictions.

Well that’s great you say, but is anyone actually using these images? Well, yes, yes they are.

There’s a couple of way to look at this; pure numbers, which are useful for some people but can be meaningless without context; and stories and examples, which are a bit more relatable. Let’s start with the numbers (and some graphs).

It’s been nearly 10 months since launch, and we’ve had nearly 14,000 downloads of nearly 8,000 images. We were hoping for around 5,000 images a year downloaded, so we’re pretty stoked. And the rate of downloads hasn’t really slowed down either. After a big launch, we’re still getting around 1000 downloads a month, with no ongoing publicity. We’ll continue to monitor this to see if the trend continues or changes, as we add more images to be available for download. 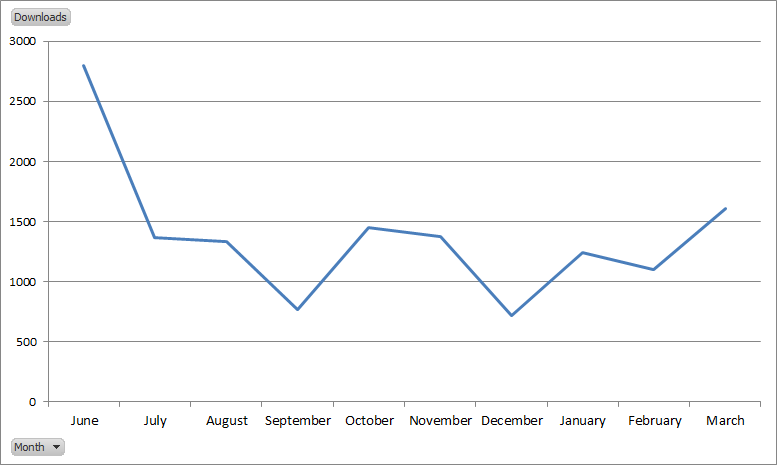 The majority of the images downloaded, over 7600, are images from our photography collection. That makes sense because the majority of images available for download are from the Photography collection, but also of course historic photographs are immensely popular and very reusable. Nearly 3000 images have been downloaded from the Art collection, and nearly 2,500 from the History collection. After that, it’s a big drop to our other collections, which again is understandable as there are less images of, for example, molluscs available, and they tend to be of slightly narrower audience use than the photography and art collections. But they are being downloaded and used for interesting and valuable reasons, and that’s important, even if the numbers aren’t high. 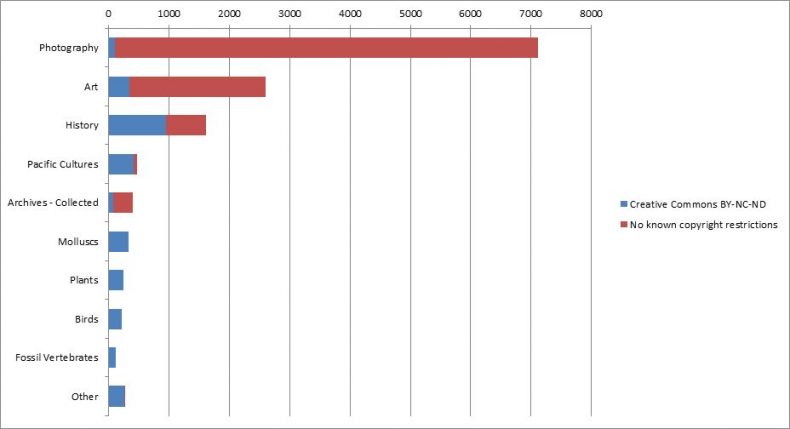 Now, the all important popularity contest, the top 10 most downloaded collection items:

So the top ten shows an obvious trend towards World War One material, which is not surprising as we are well into the centenary of the First World War. The three Huia and Cleopatra images were used to promote the download project at launch, and have been very popular since. And of Course the Colossal Squid will always be popular, because it’s a Colossal squid! And of course the numbers for the top 10 aren’t huge (number 1 has 108 downloads out of 14,000 in total), which shows there is a very long tail, i.e. that many images have been downloaded a few times, rather than just a few highly popular images downloaded many times. This essentially means the range of images we have available appear to be of use to be quite usable.

That gives you a taste of numbers, but as I said before they can be a little meaningless without some benchmarks, or a longer time to see trend.

When people download images from Collections Online, we ask them if they wouldn’t mind telling us what they are going to use the image for. Here are a few quotes from the responses, and links to the image the person is talking about:

That’s just a small sample. There are lots of comments about using images for school projects, to help identify plants or animals, to make new arts and crafts, genealogical research, creating apps, use in exhibitions, writing blogs, and lots of comments about how the person simply thinks the image is beautiful or interesting. We still need to do a fair bit more analysis over the upcoming months, and come up with some realistic benchmarks, but for now we can see by releasing these images Te Papa is actively supporting people to create, research and enjoy New Zealand culture and science. Based on some of the comments we have, we also know we are also making it a little easier for for other museums and galleries to use our images in exhibitions, and to support research.

For Te Papa, that is nearly 14,000 image requests we haven’t had to manually approve. At least 28,000 emails we’ve saved. We’ve built a robust, cost efficient, centralised system that users have said they find easy to use. And it hasn’t fallen over. We’re pretty pleased with that. One piece of feedback we’ve had is people would like to be able to search only for Creative Commons licenced or No known Copyright Restriction images as right now they are lumped together in search results, which isn’t ideal. We’ll be giving the Collections Online search an overhaul this year, so hope to include that functionality when we address that.

For anyone who is really interested, we have made the anonymised data around the downloads available from the Te Papa Github repository. I’ve taken out anything that might identify any people who have downloaded images, but there’s still lots of data around the collections objects, images, filesize, dates etc. If you’re into that kind of thing.

You might also be interested in heading over to the excellent folks at DigitalNZ, who have also recently blogged more generally about the issues of collection image reuse. It’s a clear introduction to some of the issues around copyright and reuse.

Oh, and you may be wondering why we’ve done this initial analysis at nine months instead of a year. Basically because we were too excited and wanted to get this out there. We’ll do a more rational update at 12 months!