Prints fit for a prince: a missive to Prince Charles

Sir, I realise that your punishing royal itinerary regrettably prevents any visit to these far-flung shores during Nga Toi Season 4. Nor does our digital technology as yet permit a truly intimate interaction with the delightful art works discussed below. However, I trust that this blog goes some way towards wafting you into a little world that we have specially created, and where you will feel at home…

This installation of etchings and drypoints highlighting the architectural vision of Louis Conrad Rosenberg (1890–1983) helps to rescue from undeserved obscurity an artist with a fine eye, a sure hand, a rare sensibility and a considerable intelligence. Although he grew up in a tough gold-mining encampment in Oregon, he turned into a really urbane and sophisticated early-to-mid 20th century artist. His ability was recognised early on – he won a scholarship to the Massachusetts Institute of Technology in 1911 – and the drawing skills required there for the architects of the future were just as exacting as those of the Prince’s School of Traditional Arts a century later!

Cast your eyes on the introductory grouping (and do please click on the image for closer scrutiny). Rosenberg moves from the precise topographical depiction of Notre-Dame-du-Val and the marketplace of the charming, UNESCO-protected town of Provins in France, to the freer, more atmospheric renditions of Stockholm and the heart of old Saint-Malo, Brittany, cleverly deploying shadow and scale. Although comparison with a postcard proves that Rosenberg makes the gable in Saint-Malo far steeper than it ever was in reality, it looks so right. Artists are forever manipulating reality (I’m sure even you do so, Sir, in your watercolours), only some do it more subtly (Rosenberg) whilst others are more blatant (Picasso). But I digress. What I believe Rosenberg shares with you is an intelligent eye for architectural character and personality, the sense of accretions of building over the centuries, which modernists with their ‘start from zero’ approach often ignore at their peril.

Did you know, Sir, that the art of etching was revived in the mid-19th century by three great artists who were your namesakes: Charles Meryon, Charles Jacque and Charles-François Daubigny? In this installation, I have ‘bridged’ the first of these, Meryon, with his later admirers, Randolph Schwabe and Rosenberg himself. As something of an antiquarian, you will appreciate the humour of Pont Neuf (New Bridge) through the passage of time becoming the oldest bridge in Paris, even though at a more serious level its survival reflects a respect for the past. Likewise, the Pons Fabricius in Rome, the subject of Schwabe’s and Rosenberg’s prints, has been doing its job perfectly well in spanning the Tiber since 62 BCE. May it so continue! I felt that the Porta San Paolo (Porta Ostiense), an equally venerable Roman structure, provides a satisfactory visual ‘full-stop’ to this group. 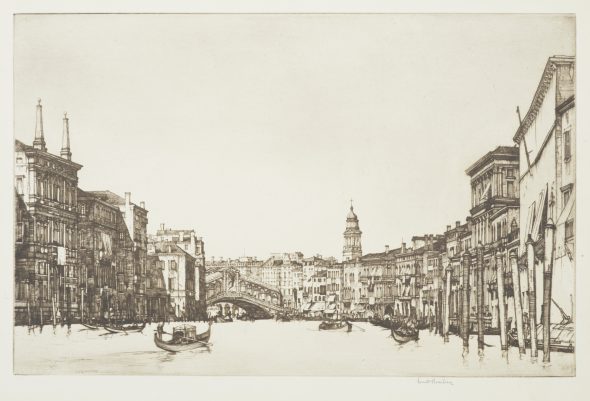 Moving on to the next few prints, you will surely be reminded just a little of one of your favourite artists, Canaletto, in Rosenberg’s Grand Canal, Venice. This understated work, even for this understated artist, avoids conveying rippled effects on the water, but we forgive Rosenberg for this austerity because the drawing is so beautifully assured. Etchers of the period (the 1920s) often focussed on the same famous heritage sites, but each brought a particular ‘twist’ of the needle and mood to their work. Rosenberg doesn’t give away much about his thoughts and feelings; indeed, he is one of the least expressionist artists of his era. The building, the light, the texture, the masonry is the thing, and it’s the artist’s duty to recapture them. A sense of humility before a building is far more important to him than baring one’s soul, or indeed using art as a searing vehicle of protest, such as we see elsewhere in Nga Toi 4. Somehow, if I may say so, I think you will identify a kindred spirit in Rosenberg.

In the installation, I have placed two Rosenberg prints opposite one by his fellow American, James Whistler, whom your great-great Aunt, the talented sculptress Princess Louise (1848–1939) much admired. I suspect her more conservative mother, Queen Victoria, was less of a fan! Like Meryon, Whistler was revered as an etcher by Rosenberg and his contemporaries. From his example, Rosenberg learned that you shouldn’t overload a print with detail. Negative space, ground and void can be as powerful as figures and objects. In Santo Stefano, Capri, Rosenberg deliberately omits some of the surrounding architectural features which we all know are present. The print is conventionally unfinished, and yet it is satisfyingly complete. From the nearby Arab Coffee House, Tangiers, we can see that it is too bright and hot for the djebella-clad coffee-drinkers to be doing very much. This very human, atmospheric scene resonates with your views, Sir, on ‘the cause of traditional Islamic architecture’, and the values of Egyptian architect Hassan Fathy, who demanded ‘human scale, human reference and musicality’ in the built environment.

Two small drypoints, one by Rosenberg, the other by his elder Scottish contemporary, D. Y. Cameron, show you how the dictum ‘less is more’ can be perfectly applicable to art before hard-core modernism. You will appreciate, indeed envy, Rosenberg’s witty ability to make the mighty Acropolis almost intimate in scale, emphasising the dark trees thickly lining the shore with deft application of printer’s ink. It is a contrived, symmetrical composition, but without a hint of stiffness.

At home with Dürer

A final reason why I believe you might feel slightly in awe, Sir, of Louis Conrad Rosenberg, is his consummate technical mastery of the drypoint and etching mediums. Your advocacy of good architecture is underpinned by a passionate belief in traditional craftsmanship, and with regret at its neglect by modernism (Bauhaus rhetoric notwithstanding). You will certainly share Rosenberg’s fogeyish fetish for working on fine old ledger paper, but it is how he gets there with the scratching, biting and inking of the print process that really counts. A time-travelling Rosenberg would feel perfectly at home in Dürer’s or Piranesi’s workshops. Yet I believe that he also connects aesthetically and perhaps even spiritually with your far more recently expressed architectural values. Practising architects, whether pro-modern or not, would do well to spend a little while in the company of Rosenberg’s prints. To quote St Paul (Philippians 4:8), may they – and indeed a wider public – ‘think on these things’. Here endeth the blog.