While May marks the beginning of winter, it also more cheerfully heralds New Zealand Music Month – that is a 31 day celebration of home-grown talent across the length and breadth of the country.

With so much Kiwi music now ‘blasting through our airwaves, soaring off stages, and rumbling out of ludicrously lowered cars at the lights these days’, the organisers have asked ‘why things weren’t like this earlier’? it has been something of a slog. One of the turning points along that road to recognition and success was in 1949, when TANZA, which nobly stood for ‘To Assist New Zealand Artists’, released ‘Blue Smoke’. Composed by Ruru Karaitiana,’Blue Smoke’ was the first commercial record to be entirely recorded and produced this country.

Ruru Karaitiana (Ngati Mutuahi), was a jazz pianist, and toured locally as part of a dance combo. With the advent of World War II, he joined the army and served as a private with the 28th New Zealand (Maori) Battalion.

He was on the troopship Aquitania, heading for the Middle East, when a friend pointed out the smoke trailing from the ship’s funnel. Karaitiana was inspired. Within a couple of days he’d composed the melody and written the words for ‘Blue Smoke’ in his head.

Blue Smoke goes drifting by into the deep blue sky
And when I think of home I sadly sigh
Oh I can see you there with loving tears in your eyes
As we fondly said our last goodbyes.

The song was performed at troop concerts, and Karaitiana tried unsuccessfully to get it published in England.

With the war over, Karaitana returned to New Zealand in 1947 and started the ‘Ruru Karaitiana Quintette’. In 1949, TANZA picked up ‘Blue Smoke’, and the Quintette performed it with Pixie Williams (from Mohaka ki Ahuriri) on vocals.

The backing music was Hawaiian-style, a popular sound at the time. It used lap steel and rhythm guitars, ukelele, and double bass.

In those days, recording could be a nerve-wracking experience. The recordings went directly onto masters and if a mistake was made, a new one had to be cut – which was expensive. And the studio wasn’t sound-proofed.  According to Williams, during her first recording session with the Ruru Karaitiana Quintette, they had to keep taking breaks because loud machinery was operating next door.

Evoking the melancholy of parting from loved ones, ‘Blue Smoke’ appealed to the public’s post-war sentiments. It became a local hit, selling over 50,000 copies. It went on to be covered by a number or overseas artists, including Dean Martin. In 1951 it was rated the fastest selling music in the USA!

‘Blue Smoke’ remains a true New Zealand classic – so much so that Chris Bourke named his award winning book on the history of popular music in New Zealand, Blue Smoke. 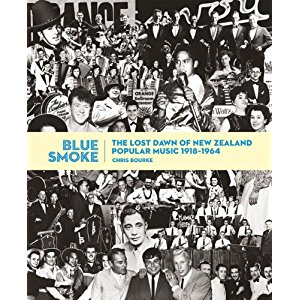 For more on New Zealand Music Month, including info on upcoming gigs check out their website.