The history of Tokelau tatau and tattooing

Senior Curator Pacific Cultures Sean Mallon looks at what the archival and published record tells us about tattooing in Tokelau.

One of my main research interests is in Sāmoan tattooing and during the course of my work in archives and museums, I’ve come across many little snippets of information about tattooing in the Pacific Islands.

This includes a few, but only just a few, accounts and images of tattooing in Tokelau. They may be well-known to some readers, but perhaps new to others.

The key accounts of tatau (tattooing) in Tokelau were recorded in the 1800s by European explorers and other observers.

They say the tattooist’s ink was made from a mixture of soot from a charred coconut mixed with water. According to one account, the pakiau (puncturing instrument), was made of a short stick with a set of fine teeth of turtle bone lashed at right angles at one end. It was tapped with another stick to deliver the pigment into the skin.[1] 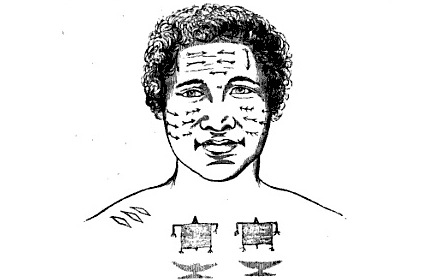 In 1841, members of a United States exploring expedition recorded that the main tattoo image tattooed was a triangular motif ‘with the apex downwards imprinted on each haunch’.

A double row of lines with little crosses between was drawn down obliquely upon each cheek, and images of turtles were tattooed on the breast. The arms down to the elbow were also tattooed with small triangles.

Alfred T. Agate, who was an artist on the expedition, made a pretty good drawing of some people decorated with tattoos. He titled the drawing Bowditch Islanders (a European name for the atoll of Fakaofo).[2,3]

The arrival of Europeans

The art of tatau in Tokelau waned and eventually disappeared after the arrival of Christian missionaries. However, according to observations made by J.J. Lister on the atoll of Fakaofo in 1889, ‘Many, if not all, of the old women, were tattooed with triangular markings around the mouth, each triangle having its base to the margin of the lip, and the apex pointing up or down. There were ten of these, five above and five below.’[4] 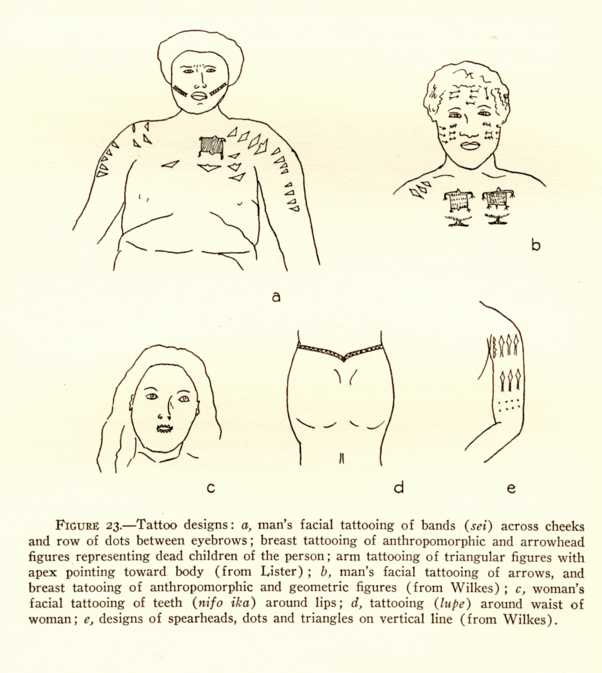 Lister also saw a tattooed old man with ‘two bands across each cheek, passing from in front of the ear forwards and downwards towards the mouth. Each band consisted of an upper and lower line, the space between being filled in with oblique cross lines. A similar band encircled each wrist, and several interrupted lines were traced round the lower part of each forearm. There were two horizontal bands across the gluteal region, a representation of a fish over the hip-joint, and a circular ornamentation above, at the crest of the ilium. A transverse band was tattooed across each calf, limited to the back of the leg, and there were interrupted lines above and below it; a single line surrounded the leg above-each ankle.’ 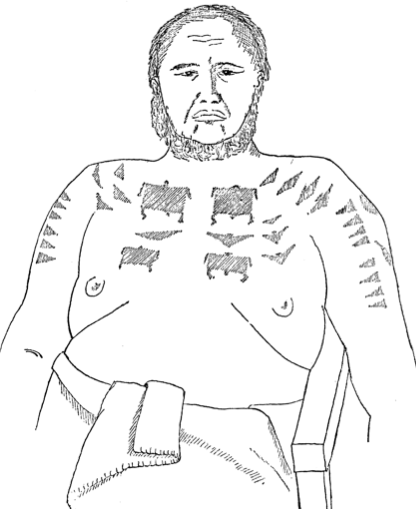 Writing in 1932, ethnologist Gordon Macgregor noted that, ‘After the death of a member of the family, particularly a child, it was customary to have a “picture” of the dead person tattooed on the left side of the chest […].’

At the time of Lister’s visit the high chief had four such figures: one for the past king, one for a dead female relative, and two for dead children. He had also smaller triangular or geometric figures for children who had died at an early age.

This final image is from the National Library Collections in Wellington. It’s titled [Lister family]: Tattooing on an old woman of 60-70 at Fakaafu – one of the Union Islands… [ca 1888]. Notice the close-up detailing of the motifs.

These are tantalising glimpses into the tattooing practices of Tokelau’s past, collected over a few short decades during a time of great change. As more museum and archive collections are digitised and put online, more Tokelau tattooing stories, images, and artefacts are bound to come to light. Let’s watch this space.