Photography, chemistry and technology – 4 days peering below the surface

Last week, along with 15 other people from museums and galleries around New Zealand who work with photographic collections, I attended a course on the care and identification of photographic prints and negatives. The course was taken by Gawain Weaver, a photographic conservator from San Francisco and he also gave another course in Auckland two weeks earlier.

The course was a rare and unprecedented opportunity to undertake training like this in New Zealand and it also opened up this kind of learning to staff from organisations around the country that might not be able to afford to travel to the USA to complete the course. The course was organised by the committe running the 2013 ICCOM joint meeting in Wellington this month and the cost of the course was subsidised by National Services Te Paerangi and the National Preservation Office.

One of the issues with cataloguing large collections of photographs from the 19th and 20th centuries is the array of different processes the prints and negatives are made from. Learning to tell the difference is key to being able to catalogue and care for them properly. In the simplest terms, the course set out to find out why some photographs never seem to fade and others do.

One of the reasons I attended the course was to help me identify the different POP (or ‘printing out paper’) processes that were used for a short period between about 1895 and 1905. This might seem like a short time to be concerned about but this was a time of transition in commercial photography that saw the 19th century albumen processes phased out and eventually gelatin silver settling into its role of dominance for the 20th century. Until that finally happened other processes were developed that eventually lost out to gelatin silver.

One of the first questions to ask about a print is whether it is ‘POP’ (printing out paper) or ‘DOP’ (developing out paper). Prints developed via ‘printing out’ were made from sensitised paper that was exposed in sunlight while ‘developing out’ paper was generally later manufactured papers that are developed in solutions in dark rooms. Learning the difference can help you decide whether the ‘look’ of the print is due to the process or whether it is faded.

The course was a timely reminder of the complexity of the technology and chemistry of photography, especially in colour. From the early autochrome process and three colour separation processes to later ones like Kodachrome and Kodak Dye Transfer prints, the trick really was to make it look easy to encourage customers to take photographs even if processing them back at the factory was exceptionally complex.

The colour in colour photographs is manufactured to look like what we see – it isn’t actually what we see. From the start the chemistry concerned with colour photography has struggled to gain good levels of saturation, stability and colour accuracy.  This continues today with the printing of inkjet prints for domestic or fine art uses which highlights some of the issues with modern processes. Family records and fine art prints need to have longevity. This might not be so much of an issue for commercial uses which tend to be immediate (through for historical purposes it is good to be able to read old magazines and newspapers).

When the Polaroid SX-70 arrived in 1972, the marketing described the camera as delivering colour prints in 60 seconds – developing while you watched – as if by magic. This recalls photography’s historical relationship to the production of what appeared to be ‘magic’ through the use of chemistry.

When we look at a photograph we tend to ignore the technical expertise and difficulty involved in using processes such as wet collodion negatives in the 19th century and early to mid 20th century colour prints. As Geoffrey Batchen has pointed out, one of the tricks of photography is that it hides behind itself – the image steals all our sight and we don’t see the physical realities of the photograph as a physical object. We forget we are looking at a photograph and only see and talk about what the image shows.

Therefore it is important too:

-Look carefully at photographs and think about the visual clues on them.

-Compare photographs with each other – don’t just look at them in isolation.

-Take care to prevent damage and deterioration – don’t expect to be able to fix it once change or damage has occurred.

-Never make any physical changes, repairs, ‘improvements’ or clean the prints and negatives yourself – consult a suitably qualified conservator if necessary.

Thank you for a great week Gawain. 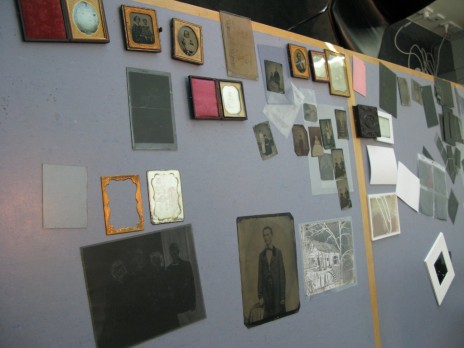