As part of Cook Islands language week we are highlighting artefacts from the Cook Islands collections. One of the treasures we look after here at Te Papa is a stunning canoe that appears at the entrance of the exhibition Tangata o le Moana: the story of Pacific people and New Zealand on level four. This vaka (outrigger canoe) is from Manihiki in the northern Cook Islands and is one of only three such vaka that survive in museums worldwide. It is called Tauhunu after the main village on Manihiki. 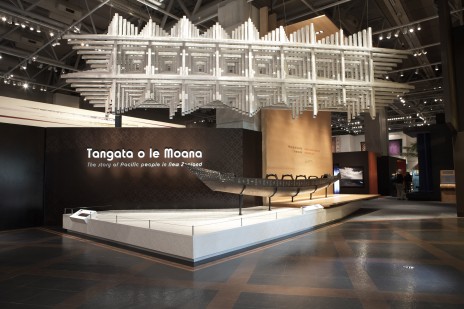 Tauhunu is made from wood lashed together with sennit (coconut husk fibre) and is decorated with inlaid pieces of pearl shell. Canoe building continued on Manihiki until recently, but modern vaka do not match the quality of workmanship of Tauhunu.

Tauhunu was displayed at the New Zealand International Exhibition of Arts and Industries, held in Christchurch in 1906. It was sent there by Lieutenant-Colonel Gudgeon, a New Zealander who was Resident Commissioner in the Cook Islands at the time. It was bought for the DominionMuseum, Te Papa’s predecessor, in 1907. Unfortunately, nothing more is known about the history or makers of Tauhunu.

In 2006, the Manihiki community celebrated the hundredth anniversary of the arrival of Tauhunu in New Zealand. They presented Te Papa with the gift of a pearl necklace to mark the occasion. The event renewed the connection between the people of Manihiki and their rare cultural treasure.