Our Far South: What it boils down to

We arrived at Macquarie Island – the sheltered waters in the lee of the island provided a welcome relief from the open ocean we had crossed between here and the Auckland Islands.

The Australian antartic explorer Mawson petitioned for Macquarie Island to be classed as a wild life sanctuary. A recent publication reported in New Scientist shows that the population has recovered surprisingly well over the last 80 years, and now numbers are back to half a million after dropping to around 4,000; and genetic  diversity is close to pre-slaughter levels – vital to long-term survival.

Four species of penguin now breed on the island as do 2 species of fur seal and of course the giant elephant seals.

Although we did not get a chance to see any Antarctic or sub-Antarctic fur seals, we did get a chance to see more king penguins, swimming and on shore and the much smaller Gentoo and Rock-Hopper penguins that were close in around the Australian base at the northern end of the island.

The base is used forvarious scientific experiments and monitoring and is also the base for the hunters who are working to finally eradicate all the introduced rabbits.

The have not seen any sign of rabbits now for two months, but this monitoring will go on for probably another 2 years.

Although all of this years Elephant seal pups have already left to go to sea, there are a few yearlings from the previous year, tiny compared to the enormous males that are still hanging out in their wallows. The few females scattered amongst them are dwarfed by the males as they are only about a quarter of their size.

The project of pest eradication on the island is an amazing success story, as they have now succesfully removed all the mice, rats, cats and hopefully now all of the rabbits.

The areas that were fenced off to keep rabbits out are full of the tussock plants that would have once covered the island. 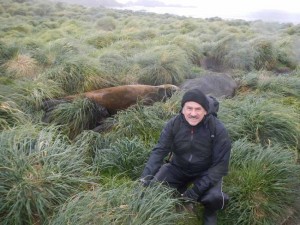 We are now heading out to sea and leaving the lee of the islands for a four day journey down to Antartica itself.

This island shows how fragile this ecosystem is but also that with considerable effort what can be done to restore them.