This silk chiffon and satin dress was worn by Lucy Eleanor (Lulu) Cracroft of Hataitai when she wed James Meade Ferguson at St Mark’s Church in Wellington just after Christmas on 29 December, 1914.

While the dress is machine sewn, it features a significant amount of hand detailing and finishing, including a ‘true lovers’ knot’ or bow embroidered in faux pearls on the train.

The train itself is padded and has small weights sewn into the hem to ensure a smooth journey down the aisle (and no doubt strong enough to defeat Wellington’s unpredictable winds). She completed her outfit with ‘something old, something borrowed’ – her grandmother’s Limerick lace veil.

An account of the Cracroft/Ferguson wedding appeared in the The Evening Post. The reporter noted that the bride was given away by her mother – her father Captain Henry Cracroft had passed away in 1909 – and avidly describes the ladies’ attire. Rather than carrying a dainty posy, Lucy carried a large spray of trumpet lilies and maiden-hair fern, the splendour of which is captured in this wedding portrait by Hardie Shaw Studios, which is also in Te Papa’s collection (below).

Unveiled: 200 Years of Wedding Dress from the Victoria and Albert Museum, London also features a dress from 1914. While there are some similarities between the two dresses, they are also world’s apart. The V&A’s dress is by Aida Woolf, an exclusive London couturier. Embellished with sparkling glass beads, the gown reflects the growing influence of evening wear on bridal clothes. While both gowns feature a fashionable V neckline and lover’s knot on the train, Woolf’s layered construction and ankle revealing scalloped hemline, show her to be at the forefront of pre-war fashion. 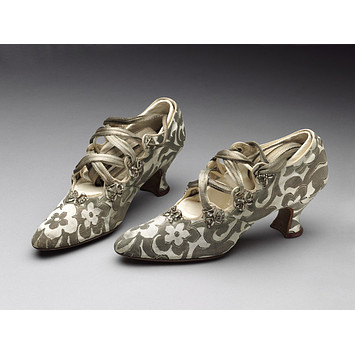