On Monday, the Unveiled installation team unpacked what must be considered one of the exhibition’s most glamorous gowns – a glorious number designed by Norman Hartnell for Margaret Whigham, a British society beauty who married Charles Sweeney, a movie-star handsome American, in 1933. While one of the most glamorous, it is also the most tricky to pack and display due to the sheer size of its lavish train – all 12 feet of it.  While the bride’s security guards unceremoniously bundled the train into the wedding car, the V&A have treated the gown with the respect it deserves – after all it took 30 seamstresses six weeks to make! Here are some images of the installation team unpacking the gown before an entranced group of media.

All of the gowns in Unveiled have travelled on their display mannequins in specially fitted out crates. The Margaret Whigham crate, pictured below, is affectionately known as the ‘toast rack’.

The M of the ‘toast rack’ has been cleverly designed to evenly support the weight of the gown’s 12 foot train.

For travelling, the gown is completely wrapped in a layer of Tyvek, a protective material.
After untying a myriad of little bows, the conservators removed the cover from the train, and began to remove the protective Tyvek and silk layers from the mannequin (below).
After revealing the gown, Keira from the V&A and Anne Peranteau, one of Te Papa’s Textile Conservators, turned their attention back to the train. After removing the Tyvek, they removed the padded ‘duvet’, which ensures that any folds in the train are ‘soft’ rather than ‘hard’.
The silk satin gown and train are studded with pearl-embroidered, transparent and appliqued stars. Both the train and ‘angel’ sleeves are trimmed with tulle, the frothy nature of which provides a dramatic contrast to the slinky sheen of the satin.
The train was designed by Hartnell to make the maximum impact in the aisle of Brompton Oratory, a Roman Catholic Church in South Kensington, just next to the Victoria &Albert Museum.
In order to display the gown, Te Papa has built a special case.  Fittingly, the gown will be shown at Te Papa alongside the wedding gown of her bridesmaid, Baba Beaton, whose Charles James dress features a dramatic split train.

While Margaret Whigham became a figure of scandal, Hartnell became one of the Royal family’s favourite designers. He designed Princess Elizabeth’s wedding and coronation gowns. Such commissions confirmed his position as London’s leading couturier.  Unveiled features two gowns by Hartnell.

Unveiled opens to the public this Saturday. At 1pm on Saturday, Keira Miller will present a talk on preparing the gowns for exhibition. 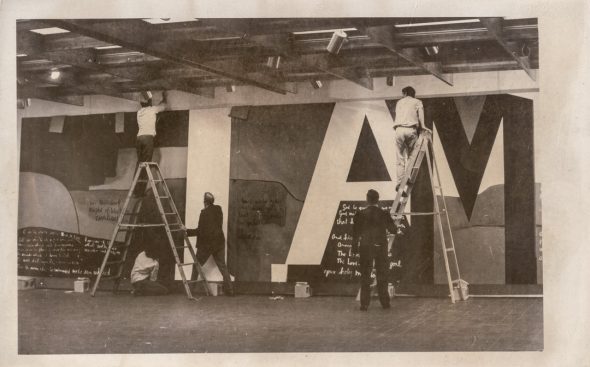 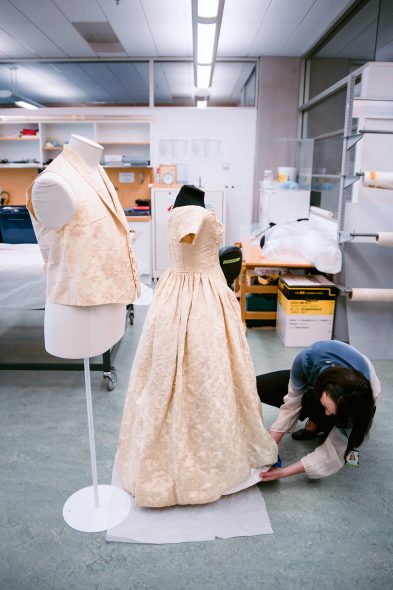