Many people at Te Papa were saddened to learn of the death this morning of Julian Dashper. Julian had suffered serious illness over the past few years. He fought cheerfully and bravely, all the while continuing to make and exhibit new work. Our deepest sympathies go out to Julian’s family. 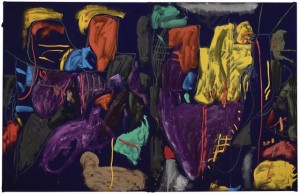 Julian’s wonderful painting Purple Rain at Glorit is currently on show in Toi Te Papa. It has to be one of the most popular works in the contemporary part of the exhibition.

Describing those rich painterly abstracts, Julian later remarked that ‘they were all made by holding the tube and squeezing it. So I never touched or embraced the painting. I could have made them wearing three piece suits. They were like lies in terms of artistic expression or angst.’

Julian always had great lines. Another of my favourite quotes related to this work, Mural for a Contemporary House: ‘People say my paintings are deep in the way they say that fat people are heavy.’ I was never sure exactly what he meant, but always thought it was hilarious.

A selection of Julian’s works were recently shown in the contemporary focus section of Toi Te Papa. His drumskins, striped canvases and stretchers looked fantastic next to works by Milan Mrkusich and Don Driver. Julian’s work loved company.

In September last year, Julian spoke at a symposium we had in conjunction with the Rita Angus exhibition, joining a panel discussion with Seraphine Pick and Robin White. As an artist, Julian had carried on a conversation with Angus’s Cass for twenty years.

Julian was his usual delightful self that day, pointing out all the love in the room for Angus’s work and suggesting that the exhibition was like our Woodstock.

Rita Angus: Life & Vision opens tomorrow night at Auckland Art Gallery. Like many people, Julian, I’ll look at works like Cass, AD 1968, and this strange little abstract, and be thinking of you. There’ll be a lot of love in the room.