This amazingly comprehensive compilation of archival material relating to William Colenso’s botanical collections has just been published by the New Zealand Native Orchid Group. The material has been researched by Ian St George and includes unpublished work by the late Bruce Hamlin (former Curator of Botany at the National Museum of New Zealand), who was preparing an itinerary of Colenso at the time of his death in 1976. Hamlin’s research notes are held at Te Papa along with over 6000 plant collections from Colenso’s herbarium.The book begins with an introductory essay by Ian St George on Colenso’s collecting activities, his herbarium and his connection with Kew. Hamlin’s work is fully acknowledged, and a reproduction of his Obituary included. 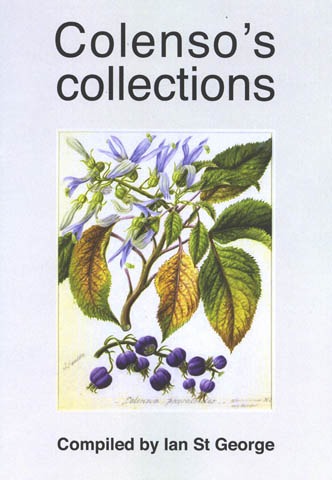 The bulk of the text is divided into three parts. The first part is largely Hamlin’s work, and includes a catalogue of Colenso’s vascular plant collection at Te Papa, a list of bryophyte collecting numbers, and a detailed itinerary of Colenso’s travels and the places he visited. The place names are also listed alphabetically with details of their exact locality, and the dates of Colenso’s visits.

Colenso’s herbarium at Te Papa includes nearly 1000 type specimens. These have now been digitally imaged and are being made available through Collections Online on Te Papa’s website, to complement Hamlin’s catalogue.

The second part of the book is a transcription of letters that Colenso wrote to Allan Cunningham, and to William and Joseph Hooker at Kew from 1839-1853, whilst he was a missionary in New Zealand. These letters contain detailed information about the plants that Colenso sent to Kew and they often provide the only information about provenance. The labels on the sheets themselves usually contain only the name of the plant and a number. Most of these letters are now held in the Kew library. The final part of the book is a transcription of letters written after he had been unfrocked, between 1854 and his death in 1899.

The book concludes with brief biographical notes about the people mentioned in Colenso’s letters, with more extensive notes about collectors who sent plants to him. There is also an Index of the genera and higher taxa referred to in Colenso’s letters, which makes searching the 400 closely-typed pages of this compilation a considerably less daunting task. The book is also available on CD as a pdf, which makes searching even easier.

This extraordinary work will be hugely valuable for anyone with an interest in Colenso, but especially for botanists and historians who need to track his movements or relocate the sources of his collected specimens. As the author himself says “The significance of Colenso’s contribution to New Zealand botany has not always been properly valued; for time must pass before we can readily acknowledge the greatness of obstinate and difficult men”.

The book is available from Brian Tyler (bandj.tyler@xtra.co.nz) for $35 in NZ including P&P.