Not all war memorials are monumental or made from marble. While I was reading Ann Beaglehole’s Eastbourne: A History of the Eastern Bays of Wellington Harbour, I discovered details of trees planted by the community to remember World War One (WWI) and those who lost their lives.

In July 1916 two pohutukawa trees were planted on the corner of Oroua and Rata Streets to mark the landing of Anzac troops at Gallipoli. The one tree that survived became known as Eastbourne’s Anzac Memorial Tree, and is regarded as the oldest Gallipoli memorial in New Zealand. 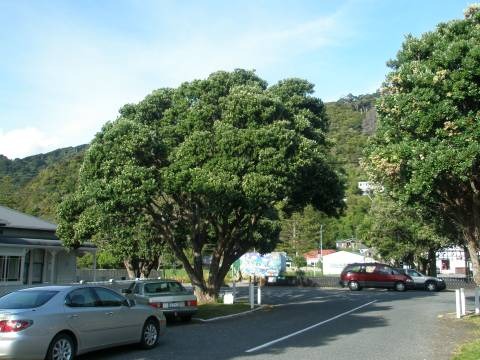 Two other memorial trees – kauri – were planted in private gardens in nearby Nikau Street, to mark the deaths of local men. One was for Second Lieutenant Harry Oswald Furlong Marsden, killed in action in October 1917 during the Battle of Broodsiende, in Belgium, part of the Passchendaele offensive.

The other memorial kauri tree was planted for Sergeant Hubert Earle Girdlestone. He lost his life in August 1918 during the Battle of Bapaume, in France. The battle was part of the successful initiative that broke through the German trench system.

If anyone has photos of these memorial trees, we’d love you to add them to our WWI memorial project at: http://www.flickr.com/groups/ww1memorialsproject/

EDIT: This project is now closed.