Picturing Asia: The Photography of Brian Brake and Steve McCurry

Te Papa is one of the partners with the Asia Society in developing this exhibition, as the Brake images are all drawn from Te Papa’s collection.

Why Brian Brake and Steve McCurry together?

Both have covered Asia extensively as illustrative photographers, working for books and magazines.

American Steve McCurry says that Brake was ‘One of the first photographers I was familiar with. Seeing his story in Life magazine on the monsoon when I was 11 years old was a great experience. It inspired me twenty years later to reinvent his original essay and do it in my own way.’

Brake was skyrocketed to fame with his 1960 Monsoon essay, and particularly the image known as Monsoon girl.

McCurry gained his reputation for his coverage of the conflict in Afghanistan in the late 1970s and early ‘80s and, like Brake, became forever identified with an image of one young woman. This is ‘Afghan girl’, taken in a refugee camp of a girl with haunting green eyes staring sideways at the camera. It become one of the best known images of the last few decades after it was reproduced on a National Geographic cover in 1984.¹

Ian Wedde curated the exhibition and chose both well-known images by each photographer as well as the less often seen. I was particularly impressed by his ability to spot the photograph below by Brake that passed me by entirely when I was selecting work for the book Brian Brake: Lens on the World in 2009.

I love the harmony of the subdued colour palette and the layering of the semi-abstract shapes of the clothes that seems to flatten depth.

The exhibition runs to 7 January 2017 at the Asia Society Hong Kong Center and then will be seen in New Zealand at Te Uru Waitakere Contemporary Gallery in Titirangi as part of the Auckland International Arts Festival, 8–26 March 2017.

There’s a Book Too 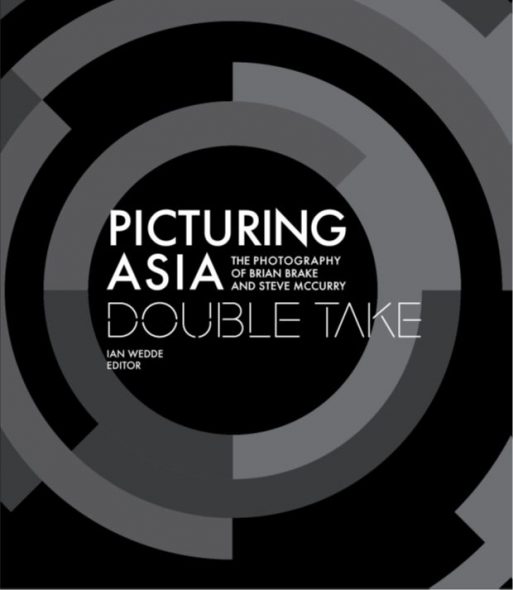 Ian Wedde has edited a substantial book associated with the exhibition, with essays by himself, Anthony Bannon, Jonathan Flaws (who first proposed the exhibition concept), Evans Chan, Ashley Nga-sai Wu and Kristy Soo, and yours-truly.

In his essay, Wedde explores the challenges for photographers dealing with the many issues contained within the book’s title: picturing (that is, representing) Asia.

He notes that both Brake and McCurry worked for mass-circulation illustrated magazines that initially functioned to offer audiences the opportunity to travel the world from the safety of their armchairs. But, with travel so much easier since the 1980s, the rise of travel publications has created a demand for attractive images that sell distant places – to make readers want to actually go there.

Wedde suggests that the two photographers have attempted to strike a balance between gratifying audience desire for sensation and exotic experience while acting as ‘ethnographic historians’; creating images that are ‘immediate in terms of impact and slow in terms of content’.

I was funded by the Asia Society to ‘press-pass’ the book in Hong Kong and in a following blog I’ll run some photographs of it being printed.