Co-collecting in Guåhan: Inside the Artists’ Studio

When you walk through an exhibition, it is easy to forget that the objects and taonga on display are the final products of a long creative process. While they may result from moments of inspiration or from countless studies, they are also formed by an artist’s ability to problem solve a number of physical and logistical details. As curators, understanding these details through studio visits and interviews allows us to develop a holistic knowledge of the objects we collect.

On our recent co-collecting project in Guåhan with Humanities Guåhan we spent time in the workspaces of five of the selected artists; Francisco ‘Corn Beef’ Lizama, James Cruz Bamba, Mark Mansapit Benavente and Jill Quichocho Benavente. In the first of our ‘inside the artists’ studio’ blog series we take you inside Lizama Forge and the practice of Master Blacksmith Frank Lizama.

Frank began blacksmithing in 1985 as one of the first apprentices of the late Master Blacksmith Joaquin “Tun Jack” Lujan, a third generation blacksmith.

At the time Mr Lujan was the sole practising Chamorro blacksmith in Guåhan and ran a shop in The Chamorro Village in Hagåtña, the capital city. Although the shop has long closed we managed to find the sign still in place. 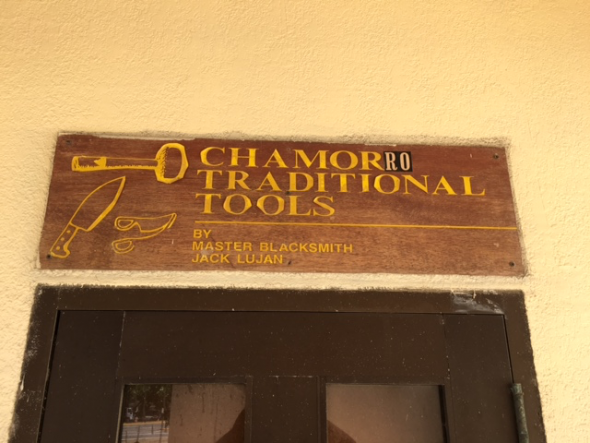 Inside the Lizama Forge

The Lizama Forge is located behind Frank’s house in the village of Yigo in northern Guåhan and operates three nights a week. Our interview with Frank took place in the middle of the forge immersed in the heat and smoke and the impenetrable smell of hot oil.

Throughout our interview Frank explained the different parts of the forging process occasionally picking up a grinder or chisel to give us a live demonstration. As we spoke, he handed us a range of tools directing our eyes towards the lustre of the steel and the grain of wood used for the handles. 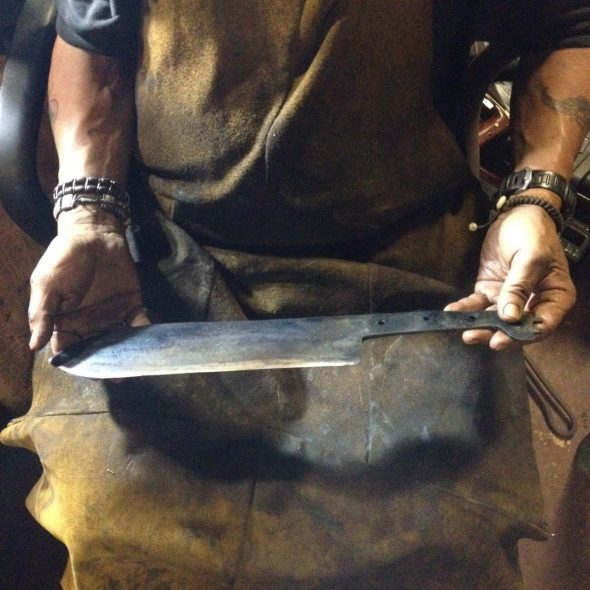 The forge makes a range of everyday tools and implements including kamyo’ (coconut graters) and teras pugua (betel nut scissors). The most highly sought after tools are machete and fosiños, a slightly adapted garden hoe which were first introduced during Spanish colonisation of Guåhan in the 17th century.

The master and his apprentices 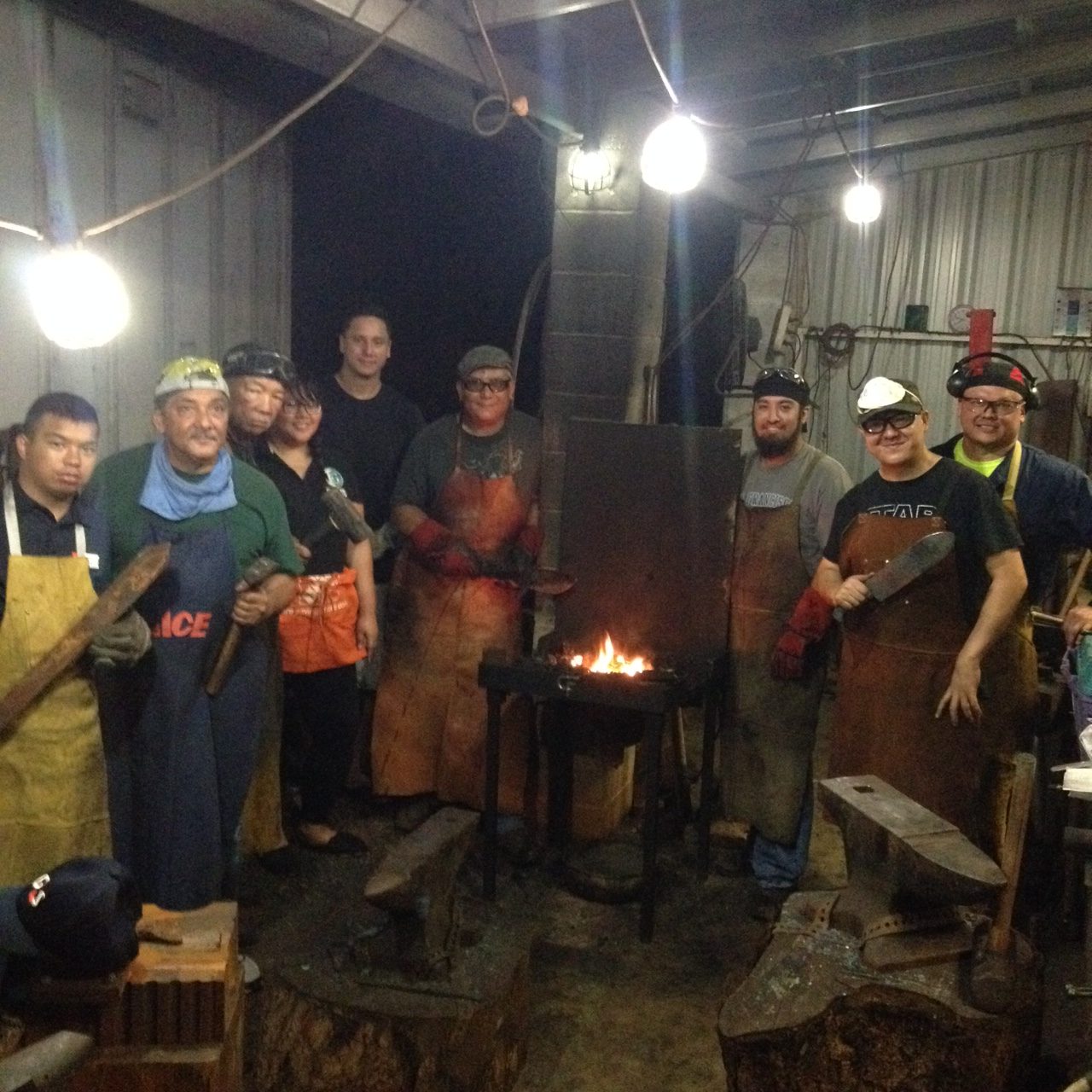 In his 30 year practice, Frank has mentored twenty apprentices, including two of his sons Sean and Troy. He has also mentored seven female apprentices and in doing so, he has helped to create a space for women within the traditionally male-dominated art form. When we visited the forge his most recent female apprentice CJ was busy making kyamu’ in preparation for the Festival of Pacific Arts. 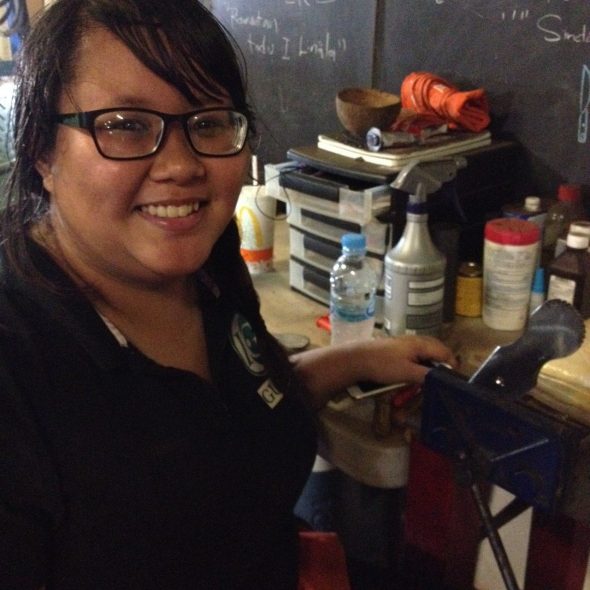 A blacksmith apprenticeship takes between six months to a year and involves learning different methods and techniques for shaping metal. Once all the techniques have been mastered the apprentice can embark on making their own tools. The first and perhaps the most versatile tool they make is a screwdriver.

Each blacksmith takes care in crafting their tools and often develop a particular style or design feature as a signature of their work. Recently, Frank has experimented with resin to incorporate colour and materials such as newspaper into the handles of his machete. 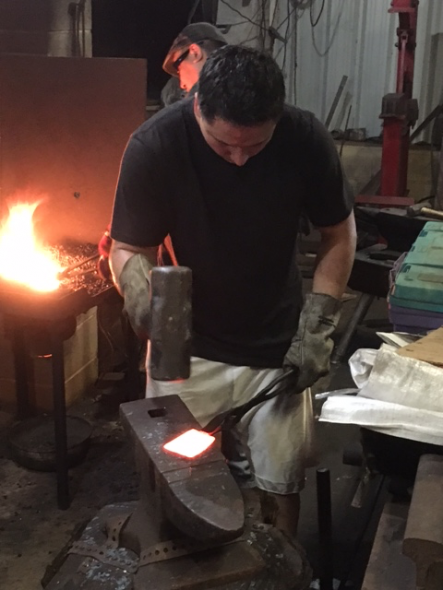 When we asked Frank what makes a good apprentice he simply replied a ‘love of steel’. As we spoke with several of his former apprentices it became clear that the love of steel is life-long. We also saw this sentiment reflected in a quote we found on the forge blackboard that suggests that blacksmithing is more than an art form, it is a way of life, “Do not just play blacksmith. Become a blacksmith.”